Developing the right protocols are the key to enticing producers to production centres here and around the world.
David Tiley 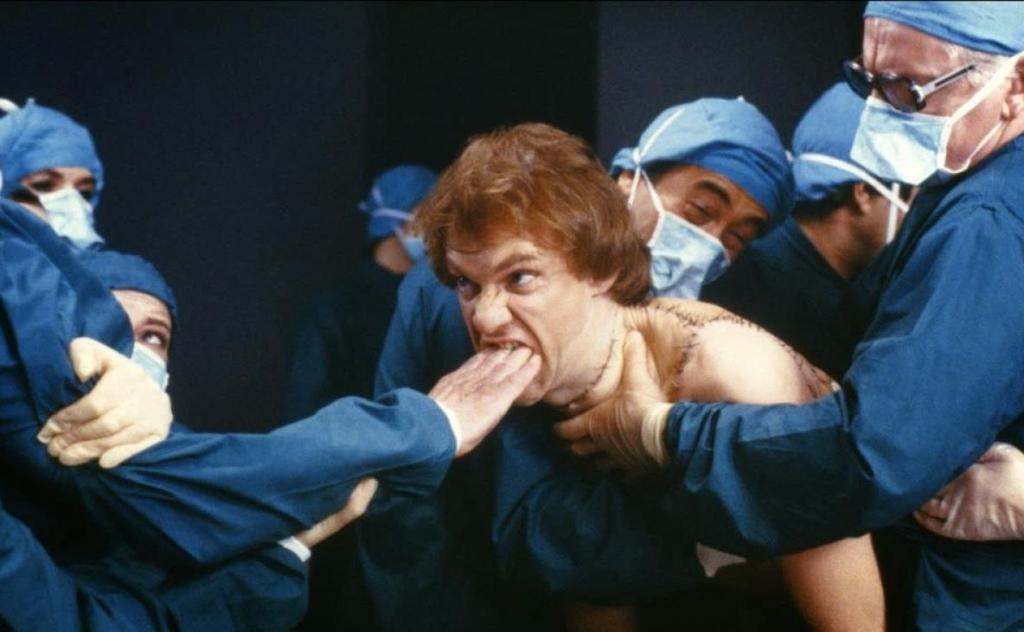 A grip has finally had enough in a shoot burdened by the virus protocol rules. Image: Britannia Hospital by Lindsay Anderson, 1982.

To get the world back into production, each culture has to demonstrate a considerable level of safety on location, which is pinned first and foremost to the spread of infection.

It only takes one sick person to stop an entire production. Overseas partners will be even more sensitive because they generally earn more money, have combative agents, and have a specific contract period. This all adds up to antsy negotiations. So each culture is developing some kind of formal protocol which will articulate the lineaments of a COVID-19 production precisely.

Wherever crews work, they will find a similar set of medical limitations. The same virus is trying to feast on new hosts doing the same work with all the human needs like food, toilets and transport. What differs seems to be the wiggle room.

Australia: a clash of cultures, a whiff of force

The Australian version is bouncing around between stakeholders aided by lawyers and organisations with different objectives. While agencies may want to get the sector working again, the protocols must mesh with the various state Health and Safety laws, which can be fierce. In Queensland right now, companies can be fined up to $10 million for the crime of industrial manslaughter, while a responsible individual is liable to a term of up to 20 years imprisonment. The other states are likely to follow suit and producers will be chilled by the implications of a sneeze.

Expect to see overseas workers quarantined, crowds replaced with CGI, a special COVID overseer on each set, and lots of teaching about distance, handwashing and the horror of a fevered brow. The wide shot will be abolished in favour of long lenses and distant cameras. Neighbours is spread out over a large lot with restricted movements and a no snogging rule to limit scripts. Megazoo, starring only animals which don’t carry the virus, is still in production. The Block is chopping up interiors, and Home and Away will start its Puritan Version on 25 May.

The protocols should be available in the next couple of weeks.

Meanwhile, we have at least two versions around the world which are actually working.

Meanwhile, commentators in New Zealand are busy being positive. Just yesterday, claiming that the future of the country lies in the tech area and the screen sector, staff journalists  from Stuff took readers through the opportunities. The clean, green Corona-free NZ was enticing long before the plague arrived and now has a clear headstart on the world. But, they claim, that is probably only 90 days.

The actual physical behaviour mandated by the New Zealand standard is pretty well identical to Australia, although the names for the moving parts and the documents will be different. But one kind of virus and a crew with actors surrounded by gear and all the human needs like food and toilets creates the same system wherever it is.

The Standard for NZ Screen Sector Operations has been signed off though it is regarded as a living document. The most detailed part is a set of protocols which come into action when the country moves to Level 2 restrictions. This has just occurred, so the trucks will be ready to roll. It requires:

‘Physical distancing of at least 4 metres between each workstation, allowing crew and talent to achieve physical distancing. Limited close contact tasks can be undertaken between film production roles, i.e. stunts, physical interactions on set, makeup and hair. Design and assemble work groups so to provide continuity within a team in case a crew member becomes unwell. After implementing the appropriate controls, limited close contact tasks can occur with extras, day players and casual crew.

‘Limited equipment used. Keep gear stashes to a minimum. Crew should keep the majority of their equipment inside workstations/vehicles. Single use products can reduce infection but must be discarded correctly or it may increase the risk of infection.

‘Public venues are open but must comply with conditions on gatherings. • Up to 100 people indoors • Up to 500 people outdoors • Studios are open.’

NZ producers are hoping to liberate 47 local shows worth NZ$200 million, along with $400 million in overseas shows.

The Hollywood Reporter has assembled information about the substantial number of European companies either open or close to open. The rules differ across the region and even between city and country in France and Spain. The differences reflect the varying eagerness of governments to open for business and the emphasis on testing in their strategies. The Czech guidelines are a good indicator.

The guidelines are no more than a framework of self-regulatory guidelines with the compulsion we are used to. Each production is different and plans can be ruined by ‘irresponsible behaviour’. They recommend frequent temperature checks along with masks, respirators and gloves.

Those people who can’t wear protective gear because of the shot or the sheer proximity are required to be tested every 14 days, as in: ‘the obligatory distance of 2 meters does not apply to professions that come into direct contact with performers from the definition of their profession (make-up, costumes, sound, etc.) – they are obliged to wear a facemask, shield and gloves’ but ‘PCR testing (every 14 days, it is not sensible more frequently) replaces the need to use PPE off-camera.’

A Czech film set will look like a hospital and various advisory and bureaucratic functions should be provided by medical staff. Between the lines, the system demands a clear chain of communication and obligation which leads firmly to the producer in control of the whole enterprise. It is a legalistic solution inside a voluntary framework.

In the UK, Coronation Street is simply incorporating the lockdown into its scripts, but only minimally lest its audience gets depressed. The CEO of both Film London and the promotional organisation British Film Commission, Adrian Wootton, has been explaining the negotiations between industry and government.

Wootton is also chairing the Inward Investment Recovery group, one of five across all sectors in the industry. In turn, it is divided into three parts: business and legal affairs; visual effects and post; and physical production. The sector is fighting to revive an estimated AU$1.9 billion in halted production.

This all looks pragmatic and effective, with a strong whiff of competitive zeal, but The Guardian quotes senior producer Andrew Eaton as claiming the UK is slower than Iceland and Sweden, where production has already begun. He regards September or October as a realistic window, dates which are being cited widely. He is also receiving guidelines from some US states which are also opening up.

Wootton is saying, ‘We really have to get this done and get government supporting it before we flag up a false dawn by saying everyone is ready to go when they’re not.’ Once the guidelines are signed off by the sector, they go to Public Health England for approval.

UK producers and their representative body PACT is faced by a gruesomely messy problem with its government, which is lost in waffle as the general population becomes more confused. Meanwhile, according to PACT, members who responded to a survey a month ago are down £2.6 million (AUD$4.86 million) per production company. 21% have minimal reserves and 61% will be flattened in six months. Unlike Australia, they are reducing their development spend.

(PACT is now running an e-Festival for indie filmmakers which is only for members. It is an interesting idea.)

As of a week ago, UK producers were adhering to general industrial guidelines for factories, plants and warehouses. They require ‘all mitigating actions possible’ which is not an absolute test but is likely to keep them safe in court. So the industry is pushing for crystal clarity but prepared to work with a current heap of generalities, which is typical of the culture.

Canada: It’s all on the net

There is a great deal of information and indexes of information on web resources around the Canadian screen industry, including a handy self-diagnosis app. It seems that the COVID action is devolved mostly to a provincial level with British Columbia pushing hard to restart.

At the moment the sector simply responds to the general protocols for industrial work and will be controlled inside the BC Restart Plan, mediated through Create BC under the guidance of Worksafe BC:

The motion picture industry’s health and safety procedures during COVID-19 and a gradual return will be coordinated through established government/industry collaborations including the Actsafe Motion Picture Standing Committee, the body that is comprised of B.C.’s industry stakeholders, including representatives of the major studio employers, AMPTP, CMPA, and unions and guilds.

The Provincial Health Officer seems to be the ultimate controller of this process, which will result in Approved Guidelines. On the surface this seems to link all the stakeholders together in defined ways run by the bureaucracy, which could resolve problems or provide better ways of escalating them. But the Canadians seem to be getting on with business, starting in July.

Who wins the international market?

It is too big to win or lose. All we need is enough production to employ those people who have the aptitude and the road to experience to be useful. While it is not possible to be a winner at this level, each of these players can certainly be a loser. There is a constant mutter through all the sources I have used here about rebuilding production methodologies at different scales, for audiences who have not yet worked out what they want next, or how they want to see it.

There is strong sense that the post-COVID industry can be decisively different, and each production centre wants to gain a strategic advantage. Behind all this is the enormous problem of insurance, which is the number one international nightmare. We will come back to that as it develops.