Taking small children to the movies is not for the faint-hearted. But staying at home can be worse. Village opens more 'Vjunior' cinemas designed for the 'fun'.
Rochelle Siemienowicz 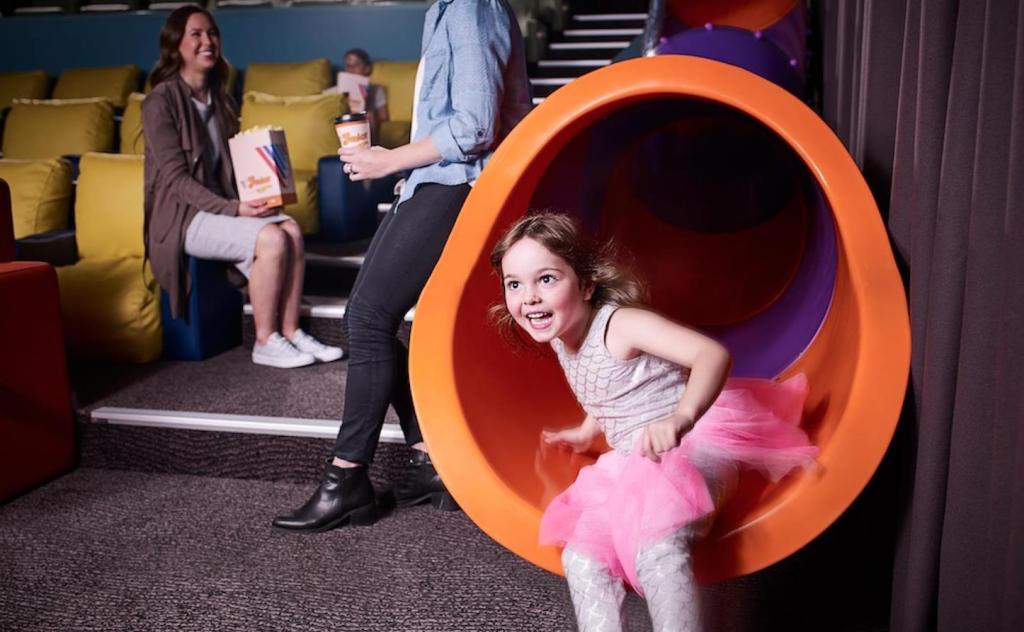 ‘Now will you sit still?’ Image supplied by Village Entertainment.

Many years ago, before I became a parent, I fantasised about how I might share my love of cinema with my child. We would sit quietly in the dark, watching Disney classics and Miyazaki films, working our way up to more challenging fare as he grew.

After a couple of traumatic ‘Mother and baby’ sessions, where I spent the whole time chasing him up and down the aisle, I realised it would be harder than I thought to combine films with family. Staying at home with a DVD (as it was then) was certainly easier, but still we kept trying, especially during the dreaded school holidays when the freezing rain fell outside and the boredom roared inside. It hardly mattered what was playing on screen. The outing was the point. And the Candy Bar.

You have to applaud cinema operators who adapt to this reality, providing options for harried parents and bored kiddies. Yesterday I received a press release about Village Cinemas’ latest ‘Vjunior’ cinema opening in Geelong.

What’s a Vjunior cinema I hear you ask? It’s ‘a child-friendly entertainment destination’, ‘designed as the ultimate movie experience for the family’.  Well, as any parent knows, keeping your expectations low is the secret to contentment. Leaving the house is an achievement in itself.

‘The cinema features a dedicated play area, beanbag seating, and most importantly, a giant slide. Guests are invited to play 30 minutes before their session starts, with an additional 10-minute intermission halfway through the movie to stretch your legs and go to the bathroom. The latest new release films are shown with modified sound and lighting levels to introduce little ones to the cinema experience.’

Buying the snacks (AKA bankrupting yourself at the Candy Bar) can now be accomplished without having to line up. There’s a special ‘Vjunior menu’.

‘Parents can order their favourite treats via the in-cinema kiosks so they don’t have to leave their little ones, and they can go and play while Village Cinemas staff prepare the order. When the order is ready, Village Cinemas will send a text, and guests can head to the back of their cinema to collect their order at their own convenience.’

All snark aside, the whole thing sounds like a great idea if you absolutely must take your very young children to the movies. The upside for the rest of us is that it quarantines the chaos in specialised spaces.

“the whole thing sounds like a great idea if you absolutely must take your very young children to the movies. The upside for the rest of us is that it quarantines the chaos”

The new Geelong venue is the sixth of its kind in Victoria, with the others being in Fountain Gate, Knox, Sunshine, Southland, Plenty Valley, and one in regional NSW in Albury. These are the suburban heartland cinemas where real families live. Village told us that the first one opened in 2016 at Southland, with the idea of accommodating kids needs, and it was a roaring success.

Head of Marketing at Village Entertainment, Stacey Kwijas, said: ‘We’ve been overwhelmed by the success of Vjunior in our locations across Melbourne, and I am so excited to be sharing this concept with families in Geelong. After a long year of lockdowns, we’re all looking for opportunities to get out of the house these school holidays.’

The lineup of films this holidays includes Disney’s Jungle Cruise, Paw Patrol: The Movie, Hotel Transylvania: Transformania and Boss Baby: Family Business. Nothing there rings my bells, but I’m no longer in the target audience.

How much does it cost? Tickets are very slightly more than regular Village kids tickets (about $1 more) due to the extended features and experience (presumably the extra half hour added to sessions, and the slide), but by singing up to the Vrewards discount program, this is reduced slightly. You’re looking at about $17.50 for a kid or adult, and $46 for a family of four, which is pretty standard. Village is all about signing punters up to their loyalty program, a move you definitely can’t blame them for in these straitened times for cinema operators.)

Speaking of ‘these times’, kids under 12 don’t have to wear masks, but there are strict capacity limits for cinemas in Metropolitan Melbourne from Friday, 11 June. Masks are compulsory in cinemas but may be removed when eating and drinking. Which brings us back to the Candy Bar, always.