Witty, thoughtful, totally self-confident, a champion both of popular culture and serious criticism, a citizen of the world and a walking bag of us, Clive James has finally gone silent.
David Tiley 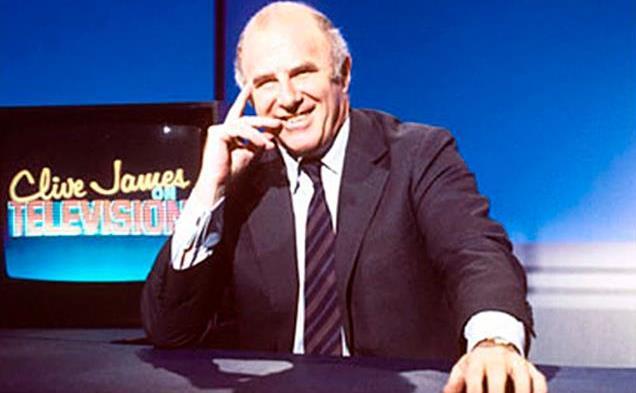 That grin when he knew he’d said something outrageous. Clive James on Television, Photo. Channel 9.

How do we feel now that Clive James has died? Empty, melancholy, left to think about his place in the world as a cosmopolitan Australian.

He went to Sydney University along with Germaine Greer, Les Murray, Robert Hughes, John Bell, Bruce Beresford and Madeleine St John, and experimented with pretentiousness as a way to survive his move from Kogarah to post-imperial intellectualism.

When he hit London he discovered he was a larrikin with a gift of the gab, who was delighted by popular culture but also enthralled by opera.

To try and write something deep and solemn about Clive James is to fall into a stupid trap and wallow in self-pity and fake knowledge. We should not take him more seriously than he took himself, but there was more than one version of him. I loved his books based on his own life, starting with Unreliable Memoirs which is a perfect title. He had a wonderful way with place and era, and turned personal history into a collision between Henry Lawson and John Cleese. He made fun and honoured at the same time.

He first emerged as a comic writer with his reviews for the Observer in London, and ultimately became the front person for his own studio show about popular culture. Who can forget Margarita Pracatan?

The first line I remember from James was this: ‘Humphrey Searle writes music that sounds like the theme from Star Wars played backwards through a washing machine.’

I felt personally validated as a young writer wrestling with an unwieldy passion for gentle pisstaking. Even more, I felt that the juices of Australian culture were really worth something. James went on to spread bons mot like a crack gardener in a poo farm.

‘[Mrs Thatcher] started quoting St Francis within minutes of becoming elected, and scarcely an hour had gone by before she was sounding like the book of Revelations read out over a railway station public address system by a headmistress of a certain age wearing calico knickers.’

‘Here is a book so dull that a whirling dervish could read himself to sleep with it. If you were to recite even a single page in the open air, birds would fall out of the sky and dogs drop dead.’

‘The adaptation of Brideshead Revisited, for example, was greated with excessive quantities of awe, gratitude and worshipful prostration. Any funeral moving at such a pace would have been dispersed by the police before it got to the graveyard.’

‘After half a lifetime of poking fun at Bernard Shaw’s materialism Kingsmill was not above touching the despised sage for ten quid. Even in the Australian school of literary morals, we weren’t allowed to slag a man and put the bite on him simultaneously: it had to be one or the other.’

‘The repeat run of Fawlty Towers (BBC2) drew bigger audiences than ever and deservedly so. Statistical surveys reveal that only the television critic of the Spectator is incapable of seeing the joke, which is that Basil Fawlty has the wrong temperament to be a hotel proprietor, just as some other people have the wrong temperament to be television critics.’

‘In The Bob Hope Golf Classic (LWT) the participation of President Gerald Ford was more than enough to remind you that the nuclear button was at one stage at the disposal of a man who might have either pressed it by mistake or else pressed it deliberately in order to obtain room service.’

There are hundreds of these now decorating the obituaries by newspapers who secretly hated him for his wit and honesty and his independent mind.

At the same time his serious work was a long exploration of irony in which his snappy contradictions were put to darker use. He returned to Hitler, the Holocaust and Albert Speer many times. His last paragraph as a television critic  is this:

If people don’t like you, they can always switch you off. To that extent, they are all critics. What really scares those deep thinkers who cherish theories about the alienated masses is the possibility that the masses might be composed of individuals. A truly popular medium such as television will always, provided it is not artificially restricted, make this possibility more likely instead of less. Hence the fear among those harbouring delusions of superiority: because if the anonymous masses prove to be nothing except a convenient hypothesis then the theorist about mass psychology is out of business,and the aspiring tyrant is reduced to being what he can least bear – one voice among many. (Clive James on Television, criticism from The Observer 1972-1982.)

Much later he told Radio 4:

‘I still haven’t forgiven C.S. Lewis for going on all those long walks with J.R.R. Tolkien and failing to strangle him, thus to save us from hundreds of pages dripping with the wizardly wisdom of Gandalf and from the kind of movie in which Orlando Bloom defiantly flexes his delicate jaw at thousands of computer-generated orcs. In fact it would have been ever better if C.S. Lewis and J.R.R. Tolkien could have strangled each other, so that we could also have been saved from the Chronicles of Narnia.’

Dead at 80, Clive Jame comes from another Australia which is already just a memory, a collection of documents composed of lived experience. This for me is still the most moving piece I have seen from him, in Postcard from Hongkong, made in 1997 just before the handover.

In 2018 now much frailer as a result of his leukaemia, he was interviewed by Stephen Fry. Let this stand as an evocation of the man.