From Fargo to The Crown, The Queen's Gambit, an accessible Irish Film Festival and the puzzling new game Baba is You, here are our recommendations this month.
Jini Maxwell 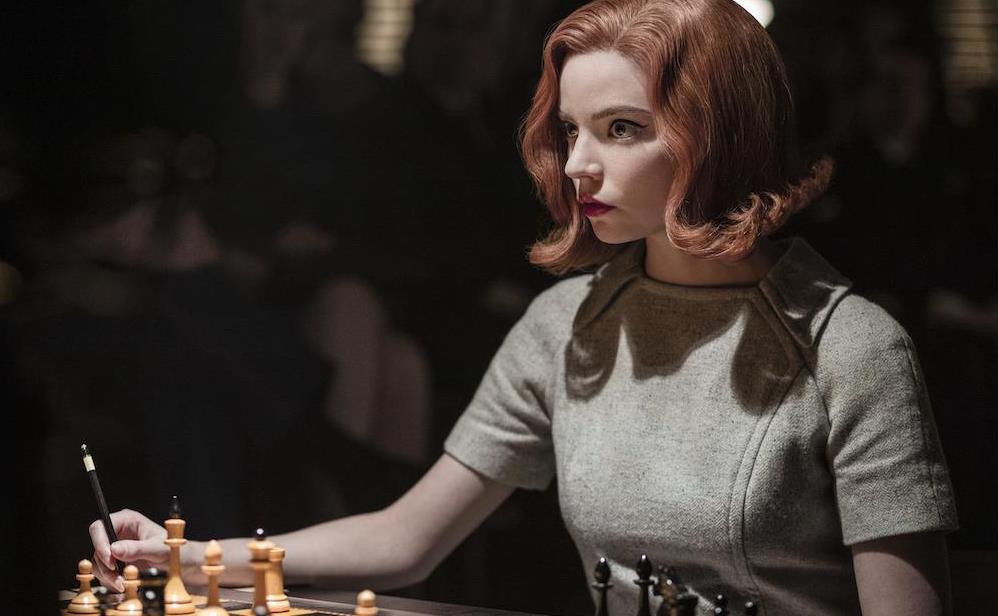 The Queen’s Gambit satisfies on every level. Image via Netflix.

Even prior to his second visit to Ireland last year, ArtsHub’s Performing Arts Editor Richard Watts was already a committed Hibernophile. (‘Something something accents, something something old boyfriend,’ Watts muttered when we asked him about his passion for Irish culture.) This month he’s been previewing several of the titles screening online at the Irish Film Festival, in preparation for speaking with the filmmakers on his 3RRR radio program, SmartArts.

‘When Women Won is a moving and stirring account of the campaign to repeal Ireland’s abortion ban, culminating in a Referendum on the 8th Amendment to the Irish Constitution in 2018. Given that the documentary was commissioned by the Together for Yes campaign it’s unabashedly one-sided, but also compelling and insightful,’ Watts said.

He also recommends the ‘gleefully offbeat’ supernatural comedy Extra Ordinary, about a driving instructor who can speak with the dead but was cooler on Poster Boys, another comedy screening at the festival.

‘Poster Boys is a road movie about Al (Trevor O’Connell), a dysfunctional “kidult” whose life is turned upside down when he has to look after his young nephew (Ryan Minogue-Lee) for a week. The chemistry between the pair is undeniable, with young Minogue-Lee especially impressive, but writer/director Dave Minogue’s script is under-developed and neither the comedic elements nor the drama ever really land, resulting in a film that’s pleasant but far from memorable. The ending in particular feels rushed and contrived, and despite taking advantage of road movie conventions to showcase Ireland’s scenery, ultimately Poster Boys feels about as substantial as the advertising collateral its lead character is tasked with distributing,’ he said.

Watts was more effusive about the queer drama Rialto, which is also streaming as part of the online festival MQFF Interrupted as well as at the Irish Film Festival.

‘Adapted by Mark O’Halloran from his play Trade, a two-hander set in a rented room, Rialto expands on the original script while simultaneously keeping a tight emotional focus. A story about repression, both emotional and sexual, Rialto is centred on Colm (Tom Vaughan-Lawlor) an emotionally constipated man whose life is in turmoil following his father’s recent death. A brief encounter with a rent boy (Tom Glynn-Carney) sparks a new awakening, but even as Colm’s heart begins to thaw his life falls apart in new, more painful ways,’ Watts said.

‘From the film’s opening scenes, the cinematography conveys how trapped Colm is by life, and the performances are excellent (especially Monica Dolan as Colm’s wife, Claire) while the script is unpredictable yet truthful. Rialto doesn’t necessarily break new ground dramatically or narratively, but it’s a potent and subtle drama all the same,’ Watts concluded.

For screen journalist Rochelle Siemienowicz, chess drama series The Queen’s Gambit has been a surprisingly strong offering from Netflix due to its emotional depth, and impeccable production: ‘I was completely captivated by this stylish and emotionally intelligent 7-part Netflix series about an orphaned chess prodigy who battles addiction to become a world champion in 1960s America.

‘Anya Taylor-Joy (The VVitch, Emma) is brilliant in the lead, as a wide-eyed and vulnerable young woman with a steely nerve. Created by Scott Frank and Allan Scott, and based on the novel by Walter Tevis (The Hustler, The Colour of Money), The Queen’s Gambit doesn’t require any understanding of chess to enjoy its tense and exciting narrative.

‘Stunning production design and gorgeous costumes are part of the pleasure, but it’s character and story that drive this series, and I haven’t watched anything as emotionally satisfying for a very long time.’

FARGO, S4 ON SBS ON DEMAND

Totally binge-worthy – or equally good for a leisurely meander – is the new S4 of Fargo on SBS On Demand (released 8 October), according to Visual Arts Editor, Gina Fairley.

‘For those of you who hungrily chewed on the first three seasons of the anthology TV series, inspired by the 1996 Coen brothers cult film of the same title, the latest edition doesn’t disappoint.

A stellar treat is the role of gangster Loy Cannon played by Chris Rock, and the ever so quirky nurse Oraetta Mayflower played by Jessie Buckley, who has a penchant for topping her patients. And that voice!

Heading up the Italian mafia is Jason Schwartzman as Josto Fadda, torn between his own grasp on power and wrangling from the old land. You may know him from Wes Anderson films, of which he has appeared in seven.

Apparently the cast had to reassemble six months after filming was shut down in March in order to complete the season’s final two episodes. It was well worth the wait! Noah Hawley’s crime saga that has the right tone of black humour and quirky cock-ups to be a true Fargo contender.’

The Crown, S4 on Netflix

For Andrea Simpson, Artshub’s esteemed reviews editor and feature writer, Netflix Original The Crown has provided some insight into a very different world: ‘So, I’ve often wondered about myself, as a person of colour, why I have such a keen interest in British history. It may be the voyeur in me that wants to see the pain behind the pageantry – and The Crown Season 4 is certainly that.

I’ve only watched a few episodes but Gillian Anderson’s Margaret Thatcher is incredible; Olivia Colman as Queen Elizabeth II, and Tobias Menzies as Prince Philip just delivers. One to watch for sure.’

Baba is You, PC, Mac, or Nintendo Switch

The basic set-up is that on each level, there are sets of three-word phrases, comprised of moveable blocks, which dictate the rules of the game: ‘Flag Is Win’ dictates that touching the flag means you win the game, for example; ‘Wall Is Stop’ means that while the rule is in effect, the player can’t walk through a wall; and the titular Baba is You is the rule that allows the player to control the little white creature Baba. Every single rule in the game can be broken, or mixed and matched by the player, who moves around the individual words blocks until they create a ruleset, however bizarre, that will allow them to win.

This unique design means that each level can be completed a variety of ways; if ‘Flag Is Win,’ but the flag is surrounded by rocks, and the rule ‘Rock Is Stop’ means Baba can’t get through, you might shift the rule blocks until Rock Is You, and you can move the rocks to touch the flag, winning the game. You could even shift the rules so ‘Baba Is You is Win,’ and you succeed merely by virtue of being Baba, if you want to be cheeky about it.

The game gets pretty hard pretty fast, but there’s so much charm in the challenge. The experience of playing Baba is You feels active and intellectually invigorating; I love that it prompts me to think more creatively about language.