What We’re Watching: May

From psychedelic cartoons to punk histories, there's something for everyone in the office's roundup of the best of May viewing.
ScreenHub 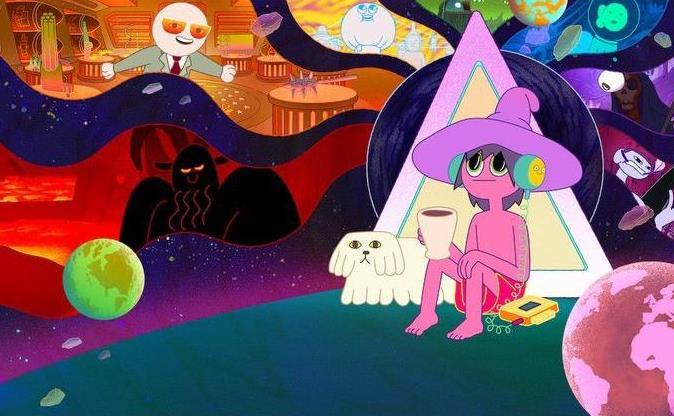 Let’s get weird with some fantastic new shows. The Midnight Gospel. Image via Netflix.

Straight from the weird and wonderful brain of Adventure Time creator Pendleton Ward comes a new cartoon: The Midnight Gospel. This wild new show is for an older audience than Adventure Time, and was created in collaboration with comedian and podcaster Duncan Trussell, host of The Duncan Trussell Family Hour. The show takes Trussell’s interview-style podcast as its jumping off point, and couches recordings of real, non-scripted conversations in the fantasy world of The Midnight Gospel. Join charming, somewhat delinquent ‘spacecast’ host Clancy, as he visits a series of simulated universes, to talk to interesting people about a range of controversial topics like death, drugs, spirituality, mindfulness, love, and loss.

Screenhub writer Jini Maxwell has loved the short series. They said, ‘the miniseries balances cosmic with conversational in a way that feels quite unique. Trussell, who plays Clancy, is a gifted interviewer, who meets interviewees where they are, offering a personal, but open-hearted, perspective on their topic. There are episodes that have really made me think through particular issues differently. Combined with stunning art direction from Jesse Moynihan (also formerly of Adventure Time), the result is moving, funny, and surreal. I couldn’t recommend it more highly.’

While it bears little similarity to the previous Penny Dreadful series, which blended familiar characters from Gothic fiction with the serial style of the original penny dreadfuls (cheap popular stories produced in the UK in the 19th century), John Logan’s Penny Dreadful: City of Angels is fast becoming addictive viewing for ArtsHub’s performing arts editor Richard Watts. ‘Imagine James Ellroy’s LA Quartet (The Black Dahlia, LA Confidential, etc) but with a supernatural twist and you have something of a sense of this new series, which is set in 1930s Los Angeles,’ Watts said. ‘Featuring everything from demonic figures and and spirits from Mexican-American folklore, alongside racial tensions, Nazi conspirators, religious fundamentalism  and a blustering demagogue’s rise to power, it’s a heady and fascinating mix of story elements. I’m only a couple of episodes in so far, but I’m fascinated to see how the story unfolds.’

Speaking of adaptations, Normal People has been a popular choice this week, with Artshub’s digital media and sales co-ordinator, Ebony Dennis, and Screenhub writer Rochelle Siemienowicz both giving it a thumbs up. Ebony recommended it as ‘just so real and authentic and it really hits home for me. It’s also very relatable – not like those series you watch where you think “that would never happen”. And make sure you bring the tissues for the last few episodes.’

Rochelle is also loving the Sally Rooney adaptation, adding, ‘I’m only four episodes in but I’m finding the quality of the writing, acting and cinematography is just so beautifully intimate and perfectly suited to this story of two people with a unique and deep bond. I’ve got to say the sex scenes – often so hard to get right – are among the best and most romantic I’ve ever
seen.’
But if you’re wanting someting entirely different, Artshub’s business analyst, Lachlan Richardson, turned us onto SBS series Punk. Executive produced by Iggy Pop, the documentary series traces the roots of the punk movement, including rare interviews and insights that will surprise even a seasoned punk fan. Lachlan said: ‘It was really well represented, and covered UK and US perspectives. It even had characters like the elusive Dave Vanian, who has always declined any involvement in these types of documentaries.
‘Episode 3 went into the US hardcore movement which was very violent and male and macho, but even then, every episode leaves you wanting more!’ After seeing snippets of Kathleen Hanna in episode 3, Lachlan has high hopes for episode 4: ‘I’m hoping it will go into the Riot Grrrl movement, with Bikini Kill, Babes in Toyland and L7.’
No Dogs in Space (Podcast)

In the same theme, Lachlan has been enjoying a new podcast from Marcus Parks and Carolina Hidalgo of the Last Podcast Network. This one is called No Dogs in Space, and focuses on the history of punk rock. They take a deep dive into the history of the key bands they prompted the movement and propelled the genre. It is so thoroughly well researched and the banter between the couple is really endearing and makes for great listening.

Film Maker / Film Watcher (Podcast)
Finally, we have another creative podcast — but this one focuses on film rather than music. Alana Morris, our member and classifieds manager, has been getting into the podcast Film Maker / Film Watcher. She says, ‘As the name suggests, one host is a filmmaker, the other a critic, and they have great banter and a good time! They’re good friends with good chemistry and you accidently learn a lot about films.’
The podcast has also adapted to the current period with a quarantine series: ‘Because they can’t get together to record at the moment, they are doing a series of super-short episodes with Friday night recommendations for quarantine.’ Perfect listening for seasoned or aspiring film buffs.