From Australian gem Babyteeth, to lesbian Christmas romcom The Happiest Season, to classic sitcom rewatches, this is what the office is watching at the end of the year.
Jini Maxwell 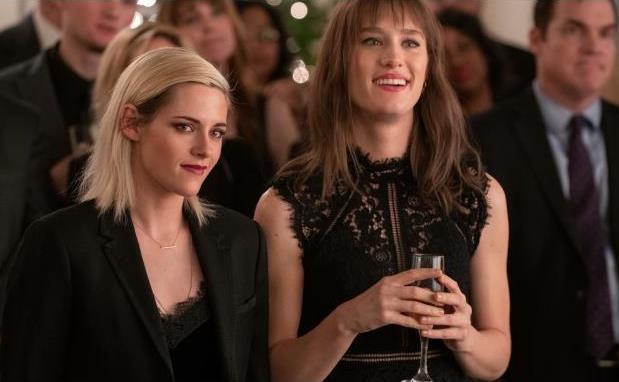 A silly Christmas movie with gay characters, a gay cast, AND a gay writer-director? I guess 2020 is starting to redeem itself. Image via Hulu.

This is our last ‘What We’re Watching’ column for this year – and what a year it’s been. Despite the travails of 2020, the energy in the air is decidedly joyful.

The sun is out, the tree is up, and at Artshub and Screenhub, we are feeling festive. Let’s dive into everything we’re watching, playing and listening to as the year draws to a close.

I watched The Happiest Season at the Coburg Drive-in on a warm night with a car-full of queer people, and I literally cannot think of a nicer way to celebrate the advent of summer, the end of lockdown, and the festive season.
For the uninitiated, The Happiest Season is a Christmas rom-com written and directed by Cléa Duvall, which stars Abby (Kristen Stewart) and Harper (Mackenzie Davis), who navigate a Christmas season at closeted Harper’s wealthy, WASPy family Christmas. Hijinks ensue. With brilliant Dan Levy and Aubrey Plaza shining in their (also very queer) supporting roles, this incredibly silly movie is a total delight.
If you’re after a cutting-edge piece of commentary, this probably isn’t the film for you – but who wants that in late December? If you’re a fan of the Christmas movie genre, you’re going to love it – especially if you’re looking for a brief respite from heterosexual romances onscreen.

As the mother of small children in the lead-up to Christmas, ArtsHub feature writer and reviews editor Andrea Simpson doesn’t always get a lot of say on movie night. Still, she’s been absorbing Christmas Chronicles 2 by osmosis, as her kids are obsessed. Starring Kurt Russell and Goldie Hawn as Santa and Mrs Claus in a Christmas romp that hits all the classic points: family, hijinks, and saving Christmas.
Andrea says: ‘I must warn you the first Christmas Chronicles was a tearjerker, and I have had a spoiler from my little one that in Christmas Chronicles 2 there is a ‘bully’ of some sort, so you have been warned.
‘Christmas movies are a secret (not so secret) joy in my household, and this movie has been recommended wisely by my little one. Merry Christmas Artshubbers and ScreenHubbers.’

Screenhub journalist Rochelle Siemienowicz finally caught up with Babyteeth in December, and considers it the best film she’s watched this year. She described it as ‘a truly original, touching and satisfying Australian movie that trusts the intelligence of the audience.’

Having swept the AACTA Awards in both craft and acting categories, this film is a beautiful and complex portrayal of youth, grief, and family. Rochelle was particularly impressed by the soundtrack, saying: ‘Its use of music is just perfect – and I’m interviewing the award-winning composer Amanda Brown early next year for Screenhub.’

If you’re not familiar with the Australian title, which debuted during the worst of the pandemic in Australia, Ben Mendelsohn and Essie Davis star as the parents of a seriously ill teenage girl (Eliza Scanlen) who’s doing her best to be a normal rebellious adolescent. When a small-time junkie (Toby Wallace) runs into her at the train station, she’s instantly smitten by his nervy charm and she brings him home to a very nonplussed mum and dad, who are grappling with their own relationship issues and their parental grief and worry. Based on Rita Kalnejais’ play (she also wrote the screenplay) and directed by Shannon Murphy and produced by Alex White, Rochelle says, ‘Babyteeth was a really welcome reminder to me that, despite the rumours, enjoyable Australian cinema is far from dead.’

The film is still in select cinemas, as well as being available to rent on Youtube.

Our fearless leader, Artshub Content Director George Dunford, has also been enjoying some local content, diving into Dom and Adrian: 2020 to ‘try to make nonsense of this year’. He’s been enjoying the return of the Bondi Hipsters, describing the plot as ‘a vessel for sketches’ that is ‘based around the Bondi Hipsters having their careers as USBJs interrupted by the COVID-19, and finding themselves doing some soul searching and conspiracy theorising.’

He recommends it to any existing fans, with Christiaan Van Vuuren’s Dom and Nick Boshier’s Adrian bringing their signature comedy style to this particularly dark year. He says, there’s plenty to enjoy in this return with enough gags about face masks, 5G and bleach injecting to make a light end of 2020 watch.’

In the same vein, he has loved The Shovel’s web content, point to their review of 2020 by film reviewers David Stratton and Margaret Pomeranz – though he adds, ‘even Margaret can’t sell the last 12 months as a 5-start satire!’

And finally, the joy of the rewatch: Friends, Netflix and Pride and Prejudice, BBC

The end of the year is the perfect time for a good old comfort re-watch, and ArtsHub’s digital media and sales coordinator Ebony Dennis is doing just that. She’s diving back into sitcom classic Friends; she says, ‘After this crazy year, I am finding a lot of comfort in it.’

Personally, I think a comfort re-watch is one of the most precious end of year traditions. My rewatch of choice is always the BBC’s Pride and Prejudice. Usually, I would be watching it with my siblings on Boxing Day, all slightly overfed and socially exhausted. This year, we’re all doing Christmas in different places around the country, but I’ll still be tuning into the classic 1995 miniseries, which is streaming on Stan.

It might not be technically Christmassy, but it’s always been a precious part of my festive season.