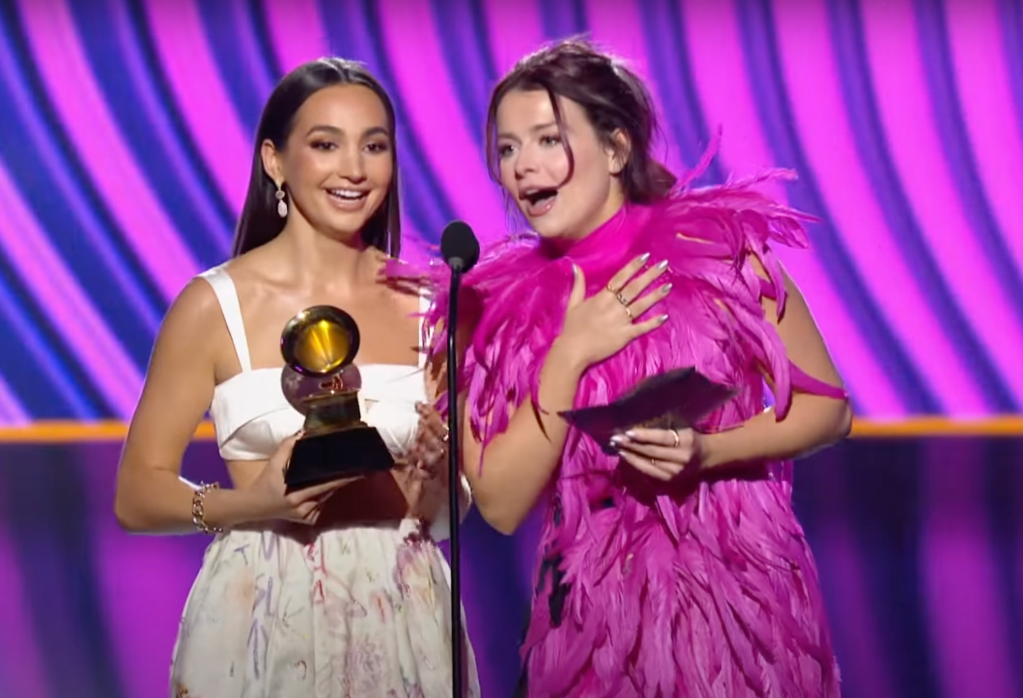 It’s the kind of headline that sounds too strange to be true – a fanfiction musical about Netflix’s Bridgerton beating Captain Cats himself? Andrew Lloyd Longest-Running-Musical-in-Broadway-history Webber?

Well, believe it – prolific songwriting partners Abigail Barlow and Emily Bear took TikTok by storm in 2021 and have been dominating the rest of the world since. Between them, they have more than 2.7 million TikTok followers, they’ve performed at the Kennedy Center’s 50th Anniversary, and are the youngest artists to ever be nominated or win in their Grammys category, Best Musical Theater Album.

So how did this TikTok fan musical based on a Netflix show reach the hallowed halls of the Grammys, the Kennedy Centre and land on multiple Billboard charts?

This underdog story really begins in December 2020, well into the thick of the pandemic and lives lived in lockdown.

Netflix debuted the first season of Bridgerton – a period-drama series following the antics of London’s Regency era society, or ‘ton’, as they are consumed by the rumours of an anonymous gossip columnist, Lady Whistledown.

Among the shows many millions of fans was Abigail Barlow, a 22-year-old singer/songwriter who uploaded a song to TikTok, accompanied by the question: What if Bridgerton was a musical?

Originally titled Daphne’s Song – and later retitled Ocean Away – Barlow sang a verse of an original ballad following the inner dialogue of series protagonist, Daphne (Phoebe Dynevor) as she pines for her tragically entwined lover Simon (Regé-Jean Page) at a ball.

In short, fans loved it — the video has amassed more than 280,000 likes and has been shared more than 20,000 times — and they soon begged for more. Throughout 2021, Barlow would continue to upload a series of conceptual songs arranged by her producer and creative partner, 20-year-old composer and pianist Emily Bear.

Songs followed the key moments of Bridgerton’s first season – a comedy number from the fiery Eloise Bridgerton (Claudia Jessie) who longs for the freedom that men are afforded in an extremely patriarchal society, a song about unrequited love from the oft-overlooked Penelope Featherington (Nicola Coughlan).

Barlow and Bear (surely the best songwriting duo name ever?) incorporated viewer suggestions as they went, live streaming their writing sessions and riffing back and forth with the rest of the Bridgerton fandom. Soon, choreographers were sharing routines inspired by the songs, musicians and singers were uploading their own covers and interpretations.

The musical went from a hypothetical idea to a fully fledged concept, and #BridgertonMusical amassed 260 million views and 48 million likes between the two creators.

Netflix, much to the surprise of many, approved the creation of a musical album. Now we have a fully produced and arranged conceptual album, and Barlow and Bear made it to Forbes 30 under 30 within the year of the project’s conception.

@abigailbarlowww What kind of song should I write next? Let me know in the comments ✨💜 #bridgertonmusical #fyp ♬ original sound – Abigail Barlow

It may shock some of you, dear readers (to borrow Lady Whistledown’s catchphrase), to learn that this isn’t the first time a TikTok musical has reached major acclaim.

During the first year of the pandemic, an intentionally goofy song based on Pixar’s Ratatouille (2007) became a TikTok meme – with winning lyrics such as:

Remy, the ratatouille. The rat of all my dreams, I praise you, my ratatouille, may the world remember your name …

While it made the rounds, the joke began to shift and change into something earnest. An international panoply of songwriters, musicians, stage designers, costume designers, graphic designers and choreographers began uploading their suggestions for a real Ratatouille the Musical.

This collaboration culminated in a charity livestream of the musical, comprised of the best contributions from TikTok users, which raised over $2 million for The Actors Fund Charity.

There are many contributing factors to the success of The Unofficial Bridgerton Musical. The first and strongest is that the music is actually good. Make no mistake, Barlow and Bear may be emerging creators, but they’re no amateurs. Emily Bear is an internationally recognised child prodigy – she was personally mentored by the legendary producer Quincy Jones and performed original compositions at Carnegie Hall at the ripe old age of nine. Abigail Barlow already had a hit song on the charts (Heartbreak Hotel) a year prior to Bridgerton‘s release.

Forgiving the American songwriters’ iffy attempts at English accents, the Bridgerton Musical album is beautifully written and arranged, featuring a blend of some of the best elements of musical theatre-style music and contemporary music. It’s a hybrid style, reminiscent of the historical yet modern-influenced show it’s based on.

But the success of the Bridgerton Musical really comes down to the fandom that conceptualised and propelled it to international acclaim. Fanfiction is a field that has been historically dominated by women, and over the years we’ve seen the increase of fan-made content finding independent success away from its source material – whether its EL James’ 50 Shades of Grey, or Anna Todd’s After series.

With the advent of extremely social platforms like TikTok, featuring advanced algorithms and incredibly collaborative app features such as ‘stitching’ and ‘duets’, the relationship between producers (such as Netflix) and consumers (such as Bridgerton fans) continues to shift to be more equal and collaborative. Creators, artists and fans have proved time and again that they can – and will – make high-quality content out of pure passion for the source material – and why shouldn’t that high quality content be awarded for its merits, aside from the original material it’s based on?

To watch two young women win a male-dominated category for work based on a show that is written by and for women is beyond refreshing.