The Girlfriend Experience: the sexual interface in three seasons

A series that's far better than the movie that spawned it, Adrian Martin especially enjoys the speculative sci-fi of the third season.
Adrian Martin 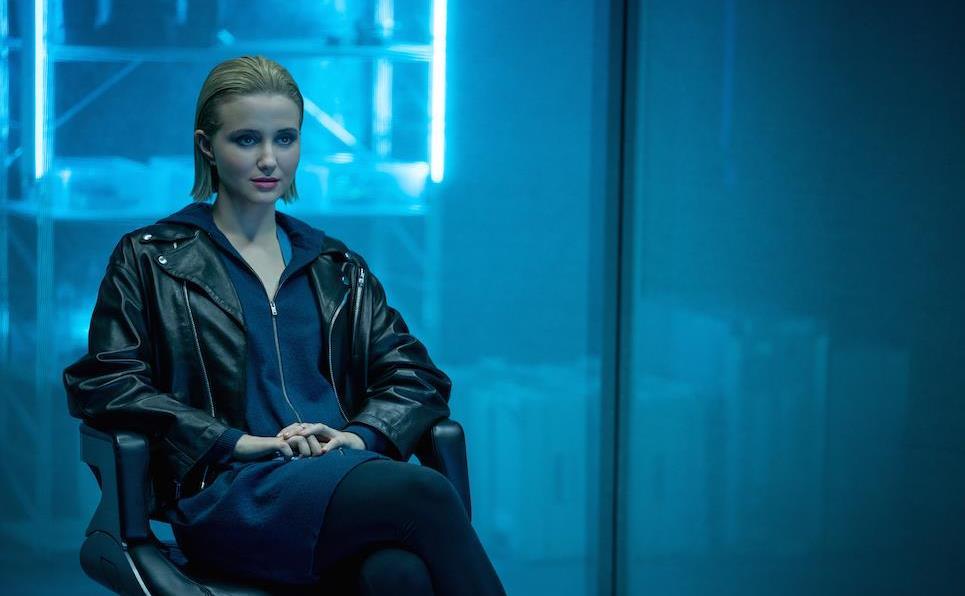 TV series that attempt to either remake or re-imagine popular movies are a dicey proposition. Sometimes, the tele-version gets just far enough away from the original – without entirely losing its overall flavour – to work; that was the case with the Coens’ Fargo (1995) and the (so far) four-season series it has spawned.

At other times, the mission seems doomed from the start: who even remembers, seven years on, Agnieszka Holland’s dismal, two-part rendition of Rosemary’s Baby in the shadow of Roman Polanski’s 1968 masterpiece? Todd Haynes played the game smarter when he signed on for the five-part Mildred Pierce in 2011; the 1945 movie version starring Joan Crawford was not so well known by then, and he also had the alibi of revisiting, in greater detail, the source novel by James M. Cain.

So-called ‘art cinema’ is not immune from the lure of such remaking for the small screen. Marco Bellocchio is in the process of redoing Good Morning, Night (2003), his stunning film about the 1978 kidnapping of Italian politician Aldo Moro by the Red Brigades, as a series titled Exterior, Night – but at least he plans to retell the tale from an entirely different set of historical perspectives. As for the announcement that Olivier Assayas plans to foist an Irma Vep series (based on his 1996 film) upon us, I cannot help but fret that it will be closer to a pale rerun of Call My Agent than to the spirit of the Nouvelle Vague.

Read: Teen Movies are growing up, but it isn’t easy

One case study, however, can begin from a statement of absolute certainty: any season of The Girlfriend Experience that you care to sample is far better than the rather grubby 2009 film of the same title. The auteur of that shocker, Steven Soderbergh, serves as executive producer on the three seasons, to date, of the series. He had the excellent idea of handing over the writer-director reins to up-and-coming figures: Amy Seimetz, Lodge Kerrigan and Anja Marquardt.

The ambiguity of transactional relationships

To be fair, the entire series spins out, thematically, from the kernel provided by Soderbergh’s original movie. In our strange, modern world, prostitution (even at its most expensive, ‘high class’ level) is no longer simply about the exchange of money for sex. The ‘girlfriend experience’ (no sign yet of a ‘boyfriend experience’ spin-off) is something weirder and more complicated: ‘transactional relationships’ (as they are named in season 1) that satisfy intimate and intense needs on various levels, while maintaining a non-committal, strictly ‘professional’ distance.

As a transaction that turns out to be mighty hard to define or control, the type of ‘escort’ arrangement we see in both the film and the subsequent TV series also runs the risk of every kind of menace and betrayal. That’s the somewhat attenuated ‘thriller’ side of the narrative concept – especially when the clients (male and female) include politicians, big business tycoons, lawyers and media celebrities. Like many a film noir, The Girlfriend Experiences hinges on knife-edge dilemmas of trust and mistrust, the keeping or divulging of dark secrets. As a result, part of season 2’s plot involves a witness protection program – but even that comes undone under the force of ambiguous sexual desire.

The Girlfriend Experience aims for something bigger than simply a sleek, neo-noir variation on an old, generic formula. Its central topic is alienation.

Ultimately, The Girlfriend Experience aims for something bigger than simply a sleek, neo-noir variation on an old, generic formula. Its central topic is alienation. Not in the sense of Bertolt Brecht’s famous ‘alienation effect’ in the theatre, or the more recent radical idea (in ‘Xenofeminist’ manifestos, for instance) that to feel alienated from society is most likely the best way to be! Both of those concepts give a positive spin to the idea of exclusion – since it enables a healthy, critical distance from the norm. No, Soderbergh and his collaborators return to the aura of 1960s film classics such as Michelangelo Antonioni’s The Red Desert in order to probe a sticky, disquieting yet sensual sentiment of overall dissociation: a state in which the mind and the body, the heart and the head, self-centred pleasure and other-directed altruism, are never quite in alignment.

This confusing experience of alienation has only become more complicated in the digital age. What the visionary British critic Raymond Durgnat once diagnosed as the zeitgeist-y ‘skin games’ depicted in 1960s movies have now moved into the realms of text messaging, virtual reality, ‘deep fakes’ and other technologies showcased in the three seasons of The Girlfriend Experience. As contemporary films from Michael Haneke’s The Piano Teacher (2001) to Julia Leigh’s Sleeping Beauty (2011) have shown, our seemingly ‘liberated’ or permissive 21st century society has created a difficult-to-manoeuvre space in which once-cloistered pornographic representations often model our everyday urges – and in which women, especially, find themselves oscillating between the extreme poles of empowerment and disempowerment.

As a TV project, The Girlfriend Experience does not follow the same plot premise from season to season. The first season in 2016, handled collaboratively by Seimetz and Kerrigan, told the story of Christine (Riley Keough), a law student supporting her academic pursuit through escort work. Like all the seasons, it places the heroine inside a shadowy, cryptic network of employers, best friends and assistants – a network that can fray apart at any moment. And the once-restrained pictorial vision of Antonioni in the ‘60s, with its precise architectural vistas and cold domestic interiors, has been expanded to include an entire, oppressive environment of glass and neon, elevators and mobile phones – all rendered in cool, monochromatic tones and set to the beat of an indifferently bubbling techno music score.

Riley Keough stars in the first season of The Girlfriend Experience. Image via Stan.

Both the writer-directors here were obviously chosen on the basis of their previous feature work: Seimetz’s Sun Don’t Shine (2012) and, even more forcibly, Kerrigan’s Claire Dolan (1998) had already staked out various zones of modern alienation. Indeed, virtually Kerrigan’s entire film career, including the portraits of mentally disturbed men in Clean, Shaven (1994) and Keane (2004), has paid obsessive and frequently poetic attention to states of acute dissociation.

Season 2 in 2017 launched a daring bifurcation: Seimetz and Kerrigan took responsibility for entirely separate storylines, which were then alternated week by week. Where Kerrigan’s half (starring Anna Friel) delved into political and corporate power games in the style of the first season, Seimetz’s contribution (starring Carmen Ejogo, with a surprising role for Harmony Korine) struck out in bolder, more jagged directions that anticipate her 2020 feature, She Dies Tomorrow. I’ll give nothing away, but the ending of Seimetz’s strand is especially unsettling.

Season 3, premiered in May on Stan, goes somewhere else again. Anja Marquardt is known for her debut German feature, She’s Lost Control (2014), the story of a female sexual surrogate and her therapeutic practice – another form of transactional relationship. For her turn at the helm of The Girlfriend Experience, Marquardt provides an extraordinarily complex mosaic of factors – posing the Big Question, until the last of the 10 episodes, as to how these factors will precisely interrelate.

Iris (Julia Goldani Telles) is a highly paid escort for the enigmatic ‘V’ company and, simultaneously, a neuroscientist looking for work in a tech start-up enterprise. In the former sphere of her life she is adept at ‘reading’ the emotional signals of male clients – while usually playing a role of her own contrivance and sporting a colourful range of wigs and accents, a little in the manner of Hitchcock’s Marnie (1964). (Telles is perfectly cast for this role: she can turn on a dime between spaced-out vacuity and piercing-gaze lucidity.) In the latter sphere, she is part of a vast team working on a grand artificial intelligence scheme: the creation of an entity that can understand, predict and deliver on an individual’s innermost wishes. Iris’ dangerous, border-crossing move is to secretly record her escort sessions in order to feed them, just as secretly, as data into the AI research.

Read: You should watch: Eden on Stan is more treasure than trash

Marquardt has, however, an ace up her sleeve: Iris’ father (played by Charles Edwards) is suffering from early-onset Alzheimer’s, and it may be the case that both her and her sister are in line to suffer the same. At this point, The Girlfriend Experience enters a veritable ‘neural network’ with a bunch of recent films including Natalie Erika James’ impressive Relic, Sally Potter’s odd The Roads Not Taken and the Canadian horror movie Flashback (aka The Education of Fredrick Fitzell). What we are witnessing, across this network, is a wild, collective speculation on the possible intersection of dementia, ‘multiverses’, digital ‘second worlds’, reincarnation, and Black Mirror-style cautionary fables about algorithmic projections. Mind-blowing stuff!

I love the turnaround moment in some contemporary horror-thrillers – I believe the underrated The Entity (1982) was the first to do this – when the action happening nominally in ‘reality’ (such as the haunting of a house) is strategically shifted to an artificial laboratory setting, so that the re-enactment or restaging of psychic and supernatural trauma can be scientifically documented and studied under proper conditions! This is exactly what happens in The Girlfriend Experience, too, once Iris agrees to have sex with specifically selected subjects – while all participants are wired up to a bank of monitoring computers. Iris’ alarm eventually goes off in her head: will she become, finally, just a ‘ghost in the machine’? It’s another variation – this time in the mode of science-fiction melodrama – of the ‘losing control’ dilemma.

As you may be able to tell by now, Marquardt’s season of The Girlfriend Experience takes some sharp left turns and covers quite a bit of ground. Ultimately (no spoilers here) the philosophical core of humanity, according to this fanciful drama, may not turn out to be libido, after all. Maybe Freud was wrong. Is the essence of individuality something else, entirely? This is a reflection for a world that may consider itself post-psychoanalytic, but has yet to trace a clear or meaningful path through the increasingly dissociated sensations coming at us both from within our brains and bodies, and from complex, external stimuli. It’s all an ‘interface’ problem. By plumbing the depths (and surfaces) of modern alienation, the three seasons of The Girlfriend Experience place us right inside the mystery of that interface.

All three seasons of The Girlfriend Experience are streaming on Stan.