Obi-Wan Kenobi made me want to be a padawan again

The 'missing chapter' of this jedi knight's journey awakened a fervor in me that lay dormant for a long, long time.
Silvi Vann-Wall 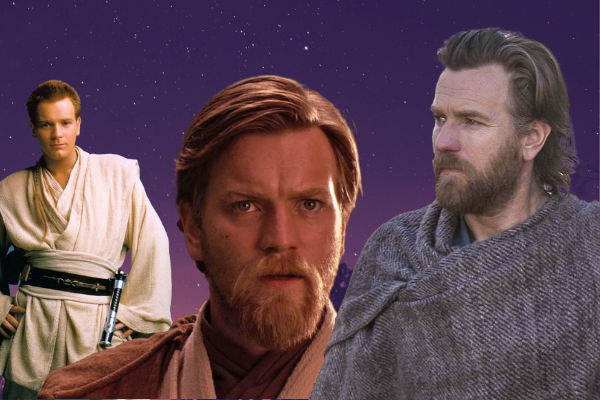 When I was a teenager, I was obsessed with Star Wars. I mean OBSESSED. Whatever you’re picturing right now, it’s not enough. I had the works: bedroom walls covered in posters of Skywalkers, bookshelves and DVD cases lined with Lucasfilm licensed media, and an encyclopedic (or should that be Wookieepedic?) knowledge of every word, music cue, and sound effect in the two trilogies.

There are also other, far more embarassing examples: when my year 8 English teacher asked the class to make a poetry book, I mainly based mine around Star Wars plotlines and character relationships, even lifting a promotional image for Episode II: Attack of the Clones for the front cover. And when I set up my first email address, mine was sith_princess_silv at hotmail dot com.

More importantly, it was my love of Star Wars that propelled me into pursuing a career in the film industry. It literally didn’t matter what I did, all I knew was that I had to be involved with movies.

But why reminisce on this stuff? It’s been years since I’ve thought of Star Wars in a positive way. The ‘sequel’ trilogy, with its barely-concealed lack of forward planning and slap-dash attempt at making Star Wars movies for the Gen Z generation, didn’t really do anything for me. And yes, I realise that neither the prequels nor the original trilogy are great examples of ‘noteworthy cinema’ either.

The main reason all these nostalgic and ‘cringey’ memories have resurfaced is thanks to the latest edition in the Star Wars canon: a little Disney+ series called Obi-Wan Kenobi. Re-uniting both Ewan McGregor (Kenobi) and Hayden Christensen (Anakin Skywalker) in the Star Wars universe, Kenobi follows the journey of its titular character between episodes III and IV (A New Hope).

When I was 15, spurred by a grandiose idea of being ‘the next George Lucas’, I begged my mum for a video camera. I was certain that despite my complete lack of experience, my home films would be shown in cinemas. No offence to teenage Silvi, but I don’t think anyone would be lining up to see a couple of high school students run around pretending to cut each other up with ‘lightsabers’– even if mum said they were particularly convincing.

Regardless, long after I had de-activated my StarWars.com account I still found myself pursuing this film-career dream, completing a Bachelor of Arts with a major in Film & TV studies, then grabbing a more hands-on media diploma, then making some short films, then a documentary, and then settling for film journalism.

Now I’m here, covering the release of shows like Obi-Wan for ScreenHub (what a gig!). At present, I can tell you that there’s more Star Wars IP than you can shake a stick at, with a new spin-off series coming out every year (The Mandalorian, The Book of Boba Fett, Andor, The Amazing World of Max Rebo, probably).

It’s exciting! Or at least, it seemed so. Too many of those offerings turned out to be just ‘meh’, and now? It’s … exhausting. I found myself longing for the days when the biggest complaint we could have about Star Wars was ‘this space opera has too many digital effects and its acting is over the top!’

So let me just say that Kenobi is not a perfect show. Its story is mostly plodding, and reveals nothing new about the Star Wars universe. But when it gave me a showdown between Obi-Wan and Darth Vader, my body started vibrating as if a thousand bees had entered through my ears and declared me their home. It hit all the right buttons. And yes, there is something oddly relatable about watching a guy who is completely jaded and on the verge of giving up find a ‘new hope’ (hehe).

But I really do feel like the biggest complaint you could make about this show is that it has too many digital effects, and its acting is over the top.

Sure, I’m not THAT old (I wasn’t even a twinkle in Darth Vader’s eye when the original trilogy came out), but evidently I had become quite fed up with Star Wars, to the point where I wanted very much to erase its existence in my life and credit my love of film to something more ‘cinematically significant’ (probably whatever the Melbourne Uni film club was talking about at the time).

Kenobi has made me reconsider. I love Star Wars – or more accurately, I have loved Star Wars – and I think people should know that. I wouldn’t be here without it. And I don’t just mean at ScreenHub.

One of the series’ most endearing elements is the inclusion of ten-year-old Princess Leia. She’s not just an adorable kid wearing some of the most iconic outfits ever to grace a screen: she represents that glimmer of hope that Obi-Wan had lost (and does so long before it manifests in her brother Luke). Some fans have said that this ‘breaks’ Star Wars canon. I literally could not care less.

To me, little Leia is two things: she is the exact sort of wide-eyed, ambitious know-it-all that I was when I first fell in love with film, and she is the next generation of film-lovers, full of big dreams and a lot of (maybe misplaced?) admiration for those in the industry.

In this liminal timeline, she may achieve all of her hopes and dreams, or she may not. But I think we should let her have her moment of delusion, where she feels comfortable about everything she loves and doesn’t let the haters get her down.

It’s too late for the doomed Kenobi, but for Leia, the galaxy is her oyster.

The fifth episode of Obi-Wan Kenobi streams tonight at 5pm AEST on Disney+.