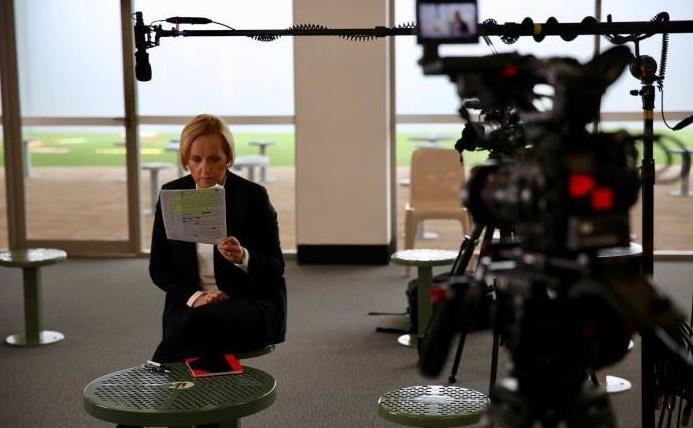 Sarah Ferguson has been a key frontline creator on Four Corners for a decade. She has excellent investigative skills, is a brilliant interviewer, with a mischievous sense of humour who loves layered conversation and contradiction.

But her session in conversation with Steven Oliver, modestly called the manager of documentary at the ABC, was mostly on her three-part series Revelation about sexual assault in the Catholic Church. It starts on Tuesday 17 March, and the ABC has allowed it the space of three feature length slots until the end of the month.

Ferguson and Oliver are both in full crusader mode as the series approaches, which is much more complex than a search for attention. There is a huge duty of care to the victims, preparing defence strategies, and simply managing the emotional fallout of their own journey into absolute evil.

That came through very strongly in her presentation in which she showed clips of interviews with perpetrators and victims, and scenes shot in the courts, for which they needed permission from the accused priests. Ferguson is utterly persistent.

Emerging from this story is a remarkable shift in the silos which divide factual: documentary and current affairs. Traditionally documentary is a deep dive about character and situation, telling a compelling story with thorough edits. Australian documentary people tend not to be trained in daily journalism and production companies can’t protect themselves with phalanxes of lawyers.

That space of intense investigatory reporting is occupied by current affairs with Four Corners at the absolute top. The reporters are the demon hunters in our world of powerful liars.

In 2015, Ferguson broke out of her frantic treadmill to make a two-part documentary series called Hitting Home about domestic violence. As she told the audience, ‘There’s no question that people experienced dark, compelling moments in their lives. I am drawn to them. I’m drawn to the idea of shifting the power balance between survivors and victims and of power in this country and in society. I’m drawn to it.

‘I am also drawn to the dark recesses of human behaviour, trying to understand them myself.’

This kind of story relies on deep interviews with perpetrators and victims. It needs a linking narrative about how we as a society try to stop domestic violence, protect and heal victims, and find a way forward for perpetrators. The work requires enormous patience.

Niall Fulton and Ivan O’Mahoney of In Films had already committed two years of work on background research and creating access to the people and institutions.

Ferguson took leave from the ABC and worked with In Films on the series for six months. She followed a rehab program for violent offenders and lived in a refuge. You can imagine the impact of this immersion on a journalist used to moving fast and kicking hard.

This was the first time the ABC had ever unleashed the power of its current affairs flagship in association with an independent company. They came back again with Revelation, supported once more by Create NSW and Screen Australia. This time they took a year.

The access is extraordinary. They interviewed two different convicted pedophiles, responsible between them for abuse of hundreds of victims. Survivors describe the experience, bring us into a dark, disgusting space, as the series intercuts between their stories and points of view. For months they traipsed around Victoria and NSW, rushing against time to record the actual moments of sentencing in case after case, just to create a montage of overwhelming evil.

‘One of the biggest gifts in moving into the [independent documentary] side of the building is narrative editing’, she explained. ‘Because in Four Corners, we have two weeks to edit a 45-minute program every time. It’s hard, it’s relentless. And so it’s much more prescriptive because it has to be.

‘But all the time I’ve been dragged by the creative part of my mind and the creative side of business, not that Four Corners is not creative – it has been remarkably successful, and creative. But clearly here we have a way of approaching subjects in less of a black-and-white way.

‘I can approach it not just through a series of facts to a certain conclusion, but it allows me the luxury to explore a motivation more. It doesn’t mean that I leave my journalistic chops behind. And I think it’s a terrible mistake to think that documentary in any way is a softening of those questions because the questions need to be sharp and simple and direct and elicit information in just the same way.

‘I conduct them [the interviews] somewhat differently, depending on the circumstances, but you need to bring that questioning, curious mind to the documentary setting and for me, it is a hybrid. And I like that hybrid position.’

The hybrid is a chance to work for much longer, to work with editors, Lili Judickas and Philippa Rowlands with their deep understanding of narrative.

Suffused through her account is the horror and emotional exhaustion of teasing and manoeuvering and softening evil people. She was hearing dreadful things from men who are manipulative; charmers, deceivers and self deceivers, for whom shame and regret is never possible. Power and narcissism in every wet blink of an eye. And then the stories from victims of the careful grooming, turning trust into obedience, innocents into enablers, growing children into fractured adults.

‘And with everything I know, I still managed to bring up boys and actually not always question where they were and who they were with and what those people were. So I think that instinct to trust – that dangerous instinct to trust, good in many ways – is is still part of a picture and I thought about that. That is the one personal thing that I allow myself to think about while sitting with those men, particularly in prison because the prison interview was so tough.’

The hybrid Ferguson speaks of is a triumph of approach in the service of complex truth, of old-fashioned righteousness laced with disciplined mercy. The use of an independent-ABC alliance, providing time, space and trust, honours both sides of the discipline, the reason and feelings that unfold behind that overused phrase, ‘speaking truth to power’.