A cemetery's ghosts are projected on a bridge in Donna McRae's latest work, while giant puppet 'Lanimals' take back the city. Art is alive out there, thanks to some small Grants.
Rochelle Siemienowicz 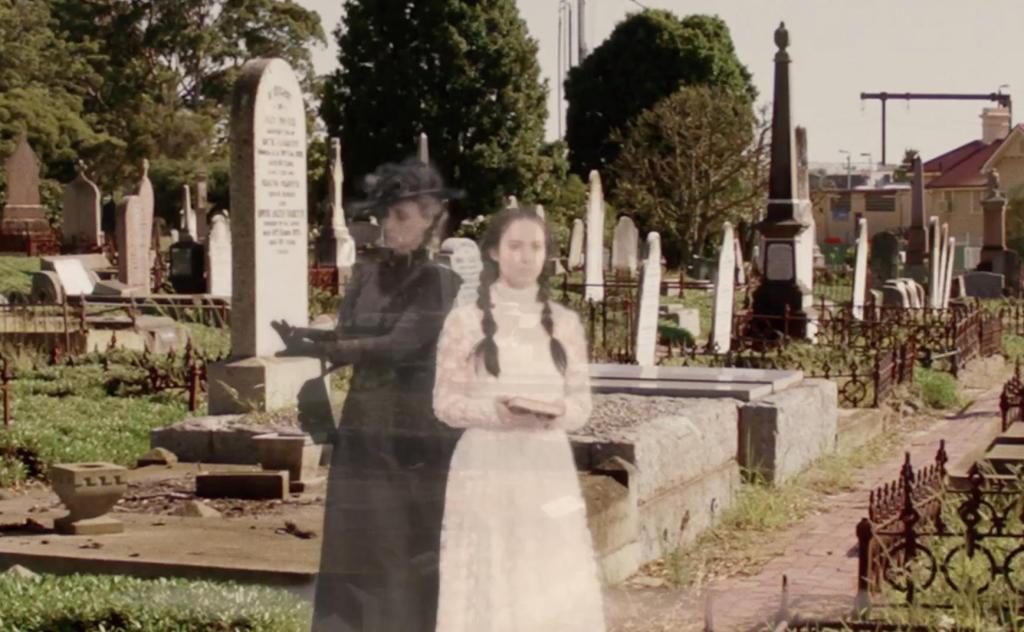 Ladies of the Cemetery. Image supplied.

Sunset arrives shockingly early these days, and there are few upsides to winter’s darkness. But if you’re in Melbourne and passing along the Nepean Highway after sunset, you can stop in at the City of Kingston Hall and glimpse two ghostly women wafting across a footbridge. These are the Ladies of the Cemetery, a 7-minute video installation created by filmmaker and artist Donna McRae, inspired by two female ‘ghosts’ from Kingston’s Cheltenham Pioneer Cemetery.

Films projected on outdoor bridges might seem an apt response to COVID-19 restrictions, but this installation, created with a City of Kingston $5000 Artist Grant, was planned long before the pandemic hit. The Bridge Projection Space was well established.

Back in March 2019, McRae attended a talk given at the picturesque Cemetery close to where she lives. She’d seen the advertisement promising the talk’s focus on the lives of 10 particular women buried there. Intrigued by the stories and the location, she applied for a grant to make a short video work inspired by them.

McRae, who lectures at Deakin University as well as making art and films, has long been interested in the idea of ghosts, even doing a PhD on the subject. She’s known for the award-winning 2012 film Johnny Ghost, and the micro-budget supernatural feature Lost Gully Road, for which she was nominated for a 2019 Australian Directors Guild Award for best direction in a feature film (under $1 million).

‘You can talk about a lot of things with ghosts… you can use them to comment on social issues and history, and to bring it all together in a concrete setting.’

‘You can talk about a lot of things with ghosts,’ she says on the phone to Screenhub. ‘I’m interested in how you can use them to comment on social issues and history, and to bring it all together in a concrete setting. I think ghosts are memories of the past, and I like the way you can use them to inform people and have a lot of fun with them too. With Ladies of the Cemetery I feel the focus is back now on the cemetery itself, as a really great place of learning and history, and even of peace.’

The long waiting game of grants is such that filming in the cemetery itself was only just completed in time, at the end of February, before lockdowns took hold. McRae’s longtime DOP, Laszlo Baranyai (ACS), shot on location in one day, with the ‘ghost’ work done on green screens with the two actors (Eleanor Webster and Jess Ciancio) and completed with VFX artist Chris Tomkins.

McRae says that seeing her film come out during lockdown has been welcome. ‘It’s been good for self esteem because as you look out, things seem so bleak, as if nothing is happening and your career is just at a standstill.’

The current dire state of Australian universities, especially Arts and Humanities courses, are not helping this outlook, but McRae says she’s trying to stay positive and open to opportunities. Having the ghosts on the bridge until the end of June, at least gives her a presence and ‘a feeling of making a contribution’.

‘It was really great that the City of Kingston could still go ahead and put on this exhibition.’ she says.  ‘At the start, there had been some talk of having it in their lovely indoor gallery instead. But I kept thinking I wanted it out there for people to see as they drove by. That turned out to be a fortunate call.

Giant puppet creatures advance on a shut down city, but the screens they’re showing on are much tinier with this other series of videos. Lanimals is ‘performance art for lockdown’ made specifically for Instagram (@lanimals__) and Facebook @invasionofthelanimals.

Supported by the City of Melbourne COVID-19 Arts Grants, with a top-up from the Banyule City Council, Lanimals uses the crisis as its starting point for its narrative.

Giant puppets, courtesy of Melbourne’s Sanctum Theatre, are employed to create a series of four weekly ‘transmissions’ uploaded on Fridays throughout June and into the start of July. The premise, mysterious and playful is this: These creatures are taking back the city from humans. Inspired by stories from around the world of nature reviving during lockdown, the ‘lanimals’, including Nanny the Goat, Starfish and Mr Dolphin (some of whom you may recognise from festivals and events round town), advance from the outer northern suburbs (in the Banyule region) into the heart of the city, with a message that humans must learn to share.

When restrictions are lifted, the Lanimals plan to roam the city on Projector Bikes, stopping wherever possible to present the films and tell of the time they reclaimed the streets.

‘Tearing fissures in the fabric of monotony’ is part of Sanctum’s philosophy. Since 2006, under the artistic direction of founder Lachlan Plain, the company’s puppet shows and live roving events have included collaborations with Magic Lantern Studio, The Man Who Cannot Sleep (themanwhocannotsleep.com) and Life is a Carousel (which won the 2017 Green Room Award for Puppetry).

The organisers of this particular project are keen to give the Lanimals their own voice. Nanny the Goat is the den mother and spokesperson, so we asked her a question

How does Nanny feel about lockdown?

‘She’s quite happy that all the people are staying home and a bit disappointed they’re coming back out on the streets again. She’s been getting into the crocheting and doing a fair bit of yarn bombing to decorate things. She doesn’t approve of Mr Dolphin, who’s been doing graffiti and tagging factory walls. They’ve each had very different approaches to the greater freedoms of lockdown.’

While Sanctum’s puppets are more typically seen responding in live events and situations, this project is necessarily more limited, but still sees them responding to site specific locations.

What is it about these giant creatures that people respond to? Speaking to Screenhub, (though he’d prefer we just talked to Nanny), Lachlan Plain says it makes people happy. ‘There’s definitely something joyous about it. People just smile when they see big things. Sometimes it’s disconcerting, with children running around screaming, “I known you’re not real, I know you’re not real!”, so it can be both fear and joy.’

Plain tells the story of filming on Flinders Street a couple of weeks ago. ‘The giant periwinkle sea snail was crawling down the middle of the tram tracks and the police pulled up for a chat, and they just had this big smile on their face. And similarly, when I turned up for Extinction Rebellion and double parked the truck containing the giant beetle, they gave me a smile. There’s something about giant colourful toys that move which brings that response.’

As for festival work and live performance, that’s is out of the question for the foreseeable future, meaning companies like Sanctum must look at other options. Small grants (like the City of Melbourne $2800 quick response arts grants) can’t really pay the rent, and don’t go far when there are several people involved in making work. But they can help to sustain a presence, and some joy, while artists consider what’s next.

Ladies of the Cemetery can be seen after dark until Tuesday 30 June on The Bridge, 979 – 985 Nepean Hwy, Moorabbin, Melbourne.