Return of the humble drive-in

The revival of drive-ins counters isolation, drawing on the magic of cinema in the open air and pointing to a wider future for a struggling form of exhibition.
David Tiley 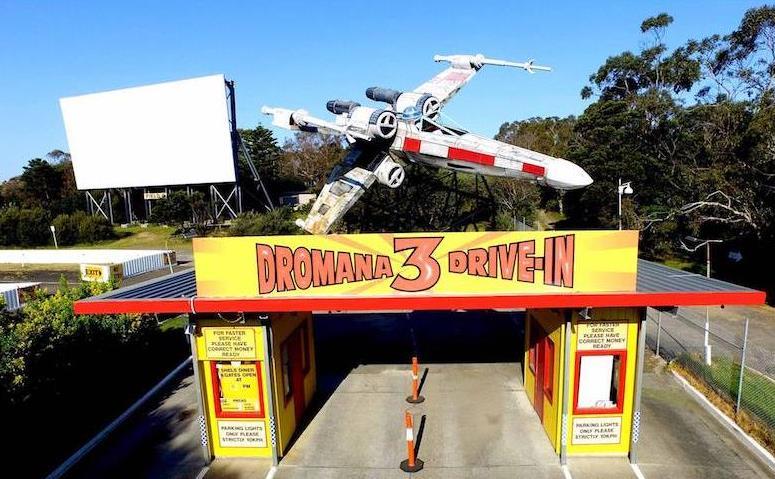 Film has a long history of projection in the outside air. The picture show men travelled with buggies and portable screens, or simply used a convenient concrete wall. In the tropics, cinemas were covered at the back and open over the front seats, while friends put deck chairs on the grass and ran film clubs with their kids asleep at their feet. Agitprop films were projected on the sides of buildings – Leni Riefenstahl’s Nazi film Triumph of the Will blazed into the Adelaide night when it was refused an indoor venue in the 1930s.

Of course, the drive-in was the perfect combination of public and private, with all those legendary images of courting couples cosy in the back and the young bloods revving Holdens against Fords, exhaust drifting in the glare of headlights. When television came the kids still wanted to escape the family couch and their parents craved outings from cramped houses on hot nights. Besides, the drive-in had a big screen, it was in colour, and you could make the speaker shake the car door.

Really, it was a wonderfully ambiguous, liminal space. People wore pyjamas in public, cuddled close to their kids and lovers, flowed into new friendships as the great myths poured onto the screen. It was emphatically about cars, mechanical life partners in steel and glittering chrome.

Late in a long fade

In the US there are 330 or so operational drive-ins, down from 4000 in the 1950s. There is a grand total of around eleven in Australia, and many are a near run thing. They look easy to build, but the capital costs are high, the screen has to survive the wind and they don’t work in daylight. But for the survivors the digital projector is a lifeline. The screens can be larger, the colours pop and the broadcast FM sound is much better even if you have to outwit the car to keep the radio on with the engine off.

But drive-ins are still big and clumsy, require roads and paddocks tarmacked into permanent waves waiting to be bulldozed into real estate. In one clever conversion, the top floor of a Melbourne carpark was once converted with a screen against the high-rise panorama but it closed.

The open-air idea has found more flexible options with deckchair and moonlight cinemas across gardens and rooftops. Best of all, blow-up screens and mobile sound systems can pop up in hours to deflate before dawn.

Then, as we literally motored to the movies, the whole systems went into a planetary fridge with COVID-19 and we turned to streaming, currently 80% of the traffic on the internet is said to be moving pictures.

People looked at drive-ins and an idea went PING in their minds. We could get round the contact restrictions if we sat in our cars, with only our families and could legitimately gather to watch movies. On a big screen, and we could shout and wave to our friends and the owners could wander around the carpark with their mobile phones and project images of all the fun on the screens…

We’ve all been so locked-in that a group of people who arrange to have actual fun together becomes news. World news if they are not breaking any regulations.

Right now the Yatala Drive-in at the wonderfully named Stapylton on the Gold Coast is going great guns if you bring your own garbage bags and use the contactless entrance procedure. The Skyline in Blacktown is rolling with two features per night on two screens, all familiar titles. The Heddon Great in Newcastle only opens on weekends and you have to leave after one session or the dunnies get too crowded; its motto says ‘If you don’t like the movie, slash the seats’.

The community-run Coober Pedy Drive-in will take seven people per car, is about to start this weekend with Sonic the Hedgehog, and opens every Saturday night until December. There is visual evidence it has a slide which says, ‘Explosives are not to be brought into this theatre’, allegedly because they do allow beer. The Galaxy in Perth is about to run Ford v Ferrari (how appropriate) and you can buy a souvenir beanie and an FM radio.

The Tors in Charters Towers has a lovely Facebook page. Steve and Deb Snell left their home town thirty years ago in their late teens and bought the drive-in. They are telling their community:

‘Every cinema operates under its’ own particular circumstances and while many have re-opened or very soon will, we regretfully advise that we won’t be at this stage. Before we bring back movies under the stars to this region, there are a number of issues that need to be negotiated for us to move forward – many of which are beyond our control in terms of movie availability, restrictions and viability.’

Which probably means boo hiss to the major distributors. Village has opened the Coburg Drive-in to sell-out crowds as it warns about social distancing rules, promises to measure the temperature of each staff member before the session and delivers candy bar treats to your car. You can even bring your dog.

The Lunar Drive-in in Dandenong used the time to finish building a new cafe, and is very happy to reopen, though they are keeping the punters inside their cars with a megaphone. The Dromana is probably even back to its Saturday car boot sales.

Korea has a drive-in culture as well, and people were queuing for up to two hours to get in as long ago as March. In the US, some drive-ins have opened earlier than normal so people can rug up and turn up even in a mountain winter. But only around 10% of them have been running through the lockdown, apparently hampered by the lack of new Hollywood films. The five cinema Premier chain in Canada was prevented by law from reopening until this coming weekend and is scampering to make the date. They have yet to announce any titles.

The Germans have two permanent drive-ins, called Autokino, which sounds as if a vending machine is involved. Both of them have been selling every possible seat since the virus struck. What is more, they have taken to pop-up Autokinos on bits of open ground, at least one as an extension of an arthouse cinema.

Read: The future of cinemagoing in a post COVID world

In Iran, where outdoor cinemas have been banned for a long time, a drive-in has appeared in the car park of the Milad telecommunications tower in Tehran. The one film as of May 5 is ‘produced by a firm affiliated with Iran’s hard-line Revolutionary Guard’.

Does this add up to a reboot of the humble drive-in? They are more vulnerable than conventional cinemas because they depend on more ducks in a row. They grew in the US as postwar families had more children, large cars with low sticker prices, and saw the growth of teen culture. The Koreans now pictured at drive-ins under a city freeway are older, with no children, look pretty prosperous and their cars are just cocoons on wheels. But they are stacked up in apartments far from outside space.

The real trick may be versatility. The Russian Karo cinema chain is putting up six drive-ins, most in Moscow and St Petersburg but is treating them as pop-ups with hints that it is testing the market. A Kentucky drive-in is using the space to run in-car church services. The Germans are really showing the way, as thirty new seasonal outfits open to bring the total to fifty. According to DW:

Heiko Desch, a theater manager, coordinates inquiries for the five drive-in cinemas. “We are being overrun,” he told DW. From poetry slams and conferences to lectures and church services, “everyone wants to use drive-in movie theaters.”

But music may well be the killer app. Keith Urban ran a concert for healthcare workers to carloads of people outside Nashville.

Australian company Action Reaction is trialling the use of drive-ins and carparks for musical and variety entertainment and plans to open in the middle of July.

But the current pioneer is Danish singer-songwriter Mads Langer who played a daylight concert in a drive-in after running out of normal venues. The whole thing went on Zoom, people at the concert participated on their computers and it was very not-rock and roll.

By going outside, the cinema has infused itself with the magic of the night, with the power of weather and the glory of the stars. Our love becomes tactile and communal, all the things we miss in this time of self-isolation. Our hunger reminds us of what we need, and we discover that the drive-in, in all its manky glory, is a stadium for our humanity.

This too can be said about live music. We are seeing these two traditions come together, one ancient and one derived from our love affair with the car as a cabin of power as we are both intimate and part of a crowd. Maybe the numbers won’t work long term, but the idea looks pretty enticing, as long as our access to personal transport is relatively democratic.