Following the recent Grand Prix win at Clermont-Ferrand, we talk to the Australian filmmaker about his short film and what comes next.
Silvi Vann-Wall 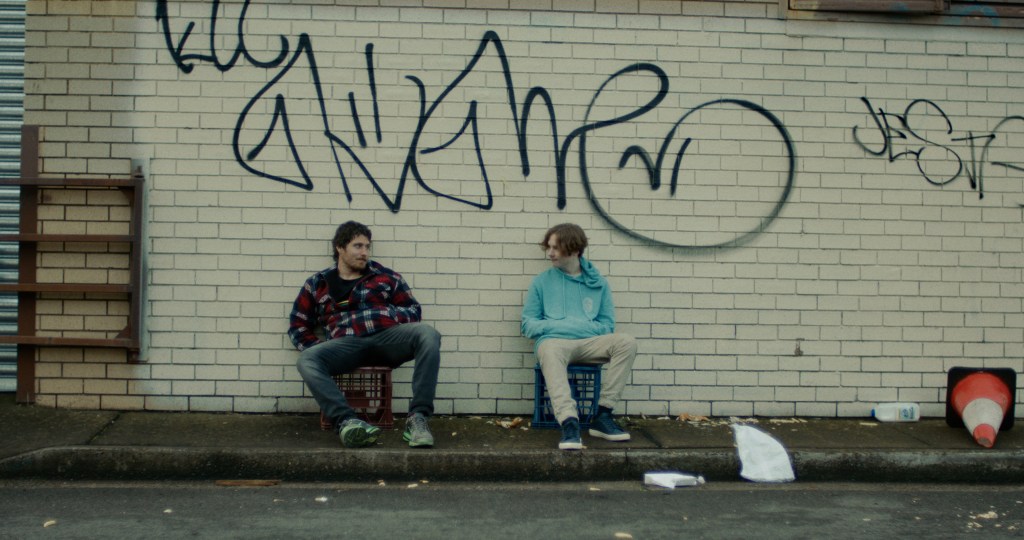 George-Alex Nagle’s Western-Sydney-based short film Mate recently won the Grand Prix at the Clermont-Ferrand International Short Film Festival, the first Australian short film to do so, and an accolade that qualifies the film for entry into the Academy Awards and BAFTAs. We caught up with him to find out more.

Congratulations on your win, George-Alex! Can you give us an overview of Mate?

Thank you. It feels amazing. But it also feels like a bit of a relief because it’s been a long journey.

Mate is about two estranged guys and, when we enter the story, we’re unsure of their relationship. As it develops, we learn they’re father and son. It’s about them attempting to reconnect – and ultimately failing.

For me, it really started off as a study piece in depression, with the end game of it being a releasable high-quality film. And then, over a long, collaborative writing process between myself and Daniel Corboy, it became an exploration of both a dated and waning form of Australian masculinity versus an emerging newer form of Australian masculinity. It also speaks to themes of family lineage and inheritance. Ultimately, it’s about finding your place in the world and trying to craft a trajectory for the future.

What personal insights did you gain while making it?

As a filmmaker, I learned quite a lot of things – the first of which being, don’t make a 30-minute film. People discourage you from doing that for a reason. If you’ve got enough story to fill half an hour, why don’t you have enough to fill 90 minutes? It really puts you at a disadvantage applying for film festivals if you have a short film of that length because, generally, festivals prefer 10-to-15-minute films.

But I was inspired by a lot of really amazing 30-minute short films, especially coming out of Europe and Asia. And oddly, every now and then, when one of them cuts through, they really they really cut through and you find that a lot of Oscar-nominated films are, you know, 20-, 30-, 40-minutes long. Still, the risk involved is just so much greater than when you’re making a shorter film.

It was quite a long process writing and shooting it – not to mention making it in the middle of Covid and all the setbacks that that came with. And then the distribution and getting into the right festivals too.

How important are festival wins to a short film’s success?

Oh, very. Especially for a film like ours. If we hadn’t had a festival pick us up, it might have gone on the internet, and maybe a few people might have looked at it, and then it would have just fizzled away. That’s not to say that it wouldn’t have had a purpose. It still works amazingly as a showcase of not only my work but of everyone who worked on it – so many great creative and technical professionals. But it probably wouldn’t have been as resonant or found as big an audience. I feel like everyone’s hard work has finally paid off significantly.

Have international viewers been shocked, do you think, to see Sydney portrayed as it is in the film?

Yeah, I think so – that was a bit of a selling point for us, showing a different side of the city. You’re not getting the Opera House and beaches and the bridge and whatnot. That was always our intention – we wanted to make something about the fringes of Sydney. And I think, on one hand, it is interesting for international audiences to see what other parts of our city are like, but I also feel that the fringes of most major cities are similar and have this feeling of stagnation. They’re basically industrial, urban and industrial wastelands.

But I also think that helped it resonate really well with an international audience. At its core it’s a fairly universal story and a fairly universal conflict that taps into universal anxieties about growth and maturity and age, not to mention familial relationships.

What are you working on currently?

Our plan at the very beginning of this festival was to come back and make an antithesis piece to Mate and just do something short with a single location – a contained little film. And I still want to do that. I still feel I’ve got more things to explore within the medium and format of short film. But then things have kind of changed after winning the Grand Prix at Claremont, which is one of the highest awards in the world that you can win for short filmmaking. So it definitely feels like the logical next step is a feature.

We have a handful of features between us that are in early stages of development, some of which are a little bit close to the themes and style of this film, and some of which are completely different. We don’t feel as if this story necessarily defines our creative voice and potential output. Some of them are quite drastically different.

We also have a number of TV series that we’re looking to develop and I guess now it’s just a matter of figuring out which one to go forward with. Probably the feature first, then kind of moving into TV. Actually with Mate, at one point, it was intended to be a proof of concept for a series as well. Hence why it’s kind of the language of TV – it’s 30 minutes and largely relies on dialogue and people talking in rooms and whatnot. It’s character-focused, not necessarily spectacle-focused.

I just wanted to add how grateful I am to everyone who worked on the film and supported it along the way, because one thing that I am finding now, having had this win, and especially being in France, where there is a very big focus on the director … This was my most collaborative film project thus far. And I really tried to remove my own personal thumbprint out of the film as much as possible. The award probably should have been given to the cast as opposed to me.

It really was a collaborative group effort.

Visit George-Alex Nagle’s website for more information on Mate and other film projects.