Making Magic: Behind the VFX that empowers the players of Hearthstone

VFX artists aren't just vital to the film and TV industry, but the videogame one too. Learn how artists at Blizzard Entertainment help bring their Warcraft card game to life.
Edmond Tran 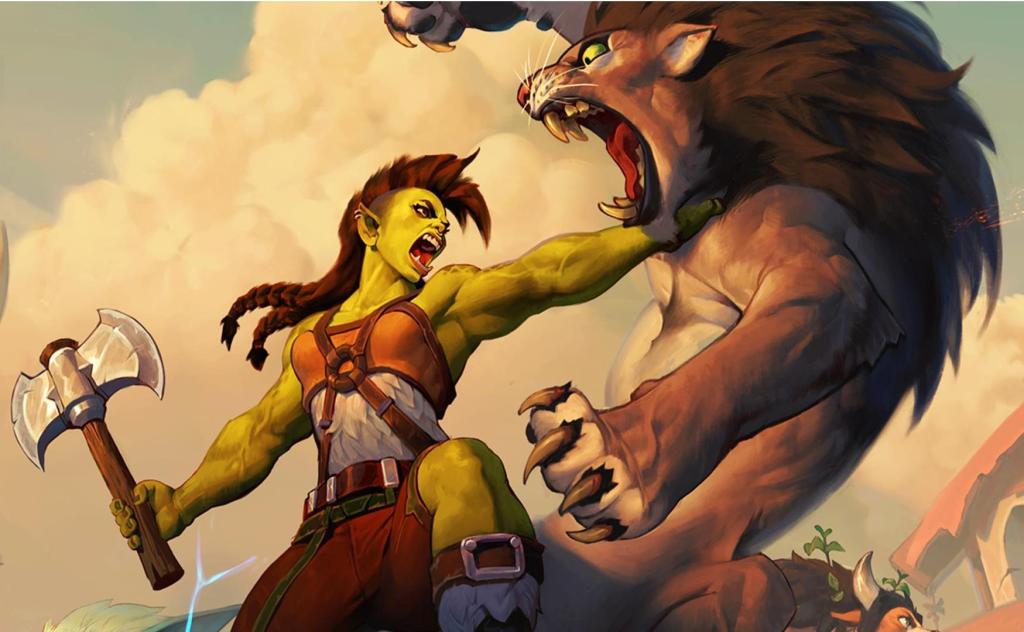 Visual effects (VFX) artists continue to be an integral part of the post-production pipeline in the film and television industry. But when it comes to videogames, there’s a tendency to more immediately think about other artistic roles – animators, modellers, and concept artists.

That balance is slightly different when it comes to the enduring digital card game Hearthstone, which builds on the same universe as World of Warcraft, and recently released its 17th expansion pack, Forged in the Barrens. With most of Hearthstone’s creatures and characters being represented as playing cards with static 2D art, much of the game’s heavy lifting is done with audio treatments and VFX that convey action and the whimsical personality that the series is known for.

Key to that process is Dominic Camugilia, VFX artist at Blizzard Entertainment, who has spent the last three years of his career working on Hearthstone. He spoke to Screenhub to talk about what attracted him to VFX work and videogames in particular, how important his contribution is to the game, and why VFX artists are the jack of all trades profession in game development.

(The following interview has been edited for clarity)

ScreenHub: How would you describe what you do to someone at a party?

Dominic Camuglia: The VFX artist role is always a pretty weird one to describe because it’s simultaneously kind of like a generalist and a specialist position. But normally how I describe it to people who are unfamiliar is that I’m an animator, but for things like fire and water – things that don’t have a form, so to speak.

I’m someone who just kind of fills in all the magic and the lightning stuff that really gives games that fantastical and otherworldly quality.

How did you get started in your career, and how did you end up where you are now?

I actually went to art school. A lot of game developers in art don’t, it’s not necessary. I was like 20 years old when I started, and I didn’t really know exactly what I wanted to do besides wanting to work in games. I actually started wanting to be a concept artist, but when I found VFX I just enjoyed it about a thousand times more than I ever enjoyed doing concept art and I just took off with that.

Part of that is because it’s sort of like a jack of all trades profession in game dev. You’re taking like painting, you’re taking modelling, you’re taking animation, and you’re combining it into something new, something that’s uniquely yours, and it’s just like a really exciting problem-solving position.

VFX artists are in such high demand in the screen sector. What made you want to go into games, rather than something like film or animation?

I’ve always really loved the storytelling capability of games, and I’ve always been really enamoured with the fantasy genre and magic and things like that, and so it felt like a really natural fit for me to want to work in games, and something specifically interactive where the player gets to feel like they have the power to wield magic.

That’s something that I feel like games offer that film doesn’t… it always feels like you have that capability in your hands and being able to be the artist who gives that fantasy to the player is something that always appealed to me.

This is an obvious question, but how vital is VFX to the development and the experience of playing a game like Hearthstone, that relies on card-based interfaces and mechanics?

Well the way that I always look at it is that VFX is how we communicate mechanics in a very intuitive way, specifically as it pertains to gameplay. It can show up in other things that are purely cosmetic like with hero skin effects and card pack openings, but for the most part, VFX is really useful for communicating complex gameplay concepts in just a couple of seconds.

So without using words, you can keep everyone understanding what’s going on on-screen without needing to elaborate.

For example, you can have a damaging effect for two different spells and one seems very light either seems very heavy and immediately just by looking at it, you can tell like they have different sorts of intensities, and that can extend to much more complex cards in gameplay mechanics as well.

The natural follow-up question: Is Hearthstone the same without its reliance on visual effects? Do you think Hearthstone would ever work as a physical, tabletop card game?

Being a digital card game, Hearthstone is really dialled into the aspect of things that you really can’t do in a physical card game. Like, creating 20 duplicates of the same card.

We can use VFX to illustrate that perfectly, but it’s something you can’t really do in a physical card game in an intuitive way, so by having a digital card game with VFX you can really easily communicate these really complex non-physical sorts of ideas pretty easily.

What kind of work does it take to complete a single interaction in Hearthstone in terms of the VFX pipeline?

It can vary pretty wildly!

One of the really interesting things about VFX compared to other artistic game dev professions is like, for a concept artist you can kinda follow the fundamentals of anatomy and structure things like that. But for VFX – every VFX artist I’ve met approaches things differently, whether it’s using mostly animations or really weird kinds of materials and shaders. It’s really up to the artists what kind of tools they want to pull out of their hat.

As far as the time spent on it, the lion’s share of effects that we do on Hearthstone takes about a week, like for a legendary card. But then for more complex and longer-lasting things like pack openings, they can average about two weeks.

The exciting thing about Hearthstone is that every card feels extremely different, so it’s always a new sort of puzzle, a new challenge, a new thing to kind of discover with every task that we get.

Hearthstone is currently on its 17th expansion pack, and my natural thought is that it must be hard to continue to be creative with VFX work. Do you feel like you’ve exhausted absolutely all of your ideas sometimes?

On the design side, you can tell guys like Alec [Dawson, Lead Designer (Final Design) on Hearthstone] and other designers are always trying to create new designs that challenge preconceived notions about what the game can be, and with these cards getting more and more unique it gives us a really cool opportunity on the effects side of getting that challenge of communicating these really unique, not-seen-before things.

It gives us an opportunity to always keep things fresh and on the visual side, our tools are always improving so it always gives us a little bit more flexibility on the artistic side as well.

How much has your job changed since you started?

So effects artists, I think, are kind of comparatively rare in the industry. There aren’t a lot to go around, and Hearthstone is a pretty effects-heavy game.

When I started, I was still pretty new to the industry and I was just spending most of my time learning and kind of getting my footing. And since then I’ve become pretty well versed and the tools that we use, the visual style of the game, and so my responsibilities sort of increased accordingly.

I went from just spending two weeks, just working on effects to spending a lot more time collaborating, discussing longer-term goals. I guess I just started wearing a lot more hats than I did when I first started.

So for any aspiring VFX artists, what kind of skills, tools, or training are necessary to sort of do your role as it stands today?

It tends to vary, but for a lot of people sort of falls into two camps:

One is more on the technical side, where it’s about being really capable and using a lot of different programs, a lot of different tools, using a little bit of scripting. The other side is more artistically minded and sort of like problem solving just purely through animation and materials and textures.

I think, ideally, one of the best skills to have for an effects artist is versatility, and you can say this about any artist, but the ability to give and receive feedback, the understanding of things like shape and form, understanding of animation principles are all things that are pretty universally valued as a VFX artist.