'The ability to focus, without interruption and just inhabit a beautiful space where you're working extremely fast with clarity.' Nerida Tyson-Chew reflects on life as a screen composer.
David Tiley 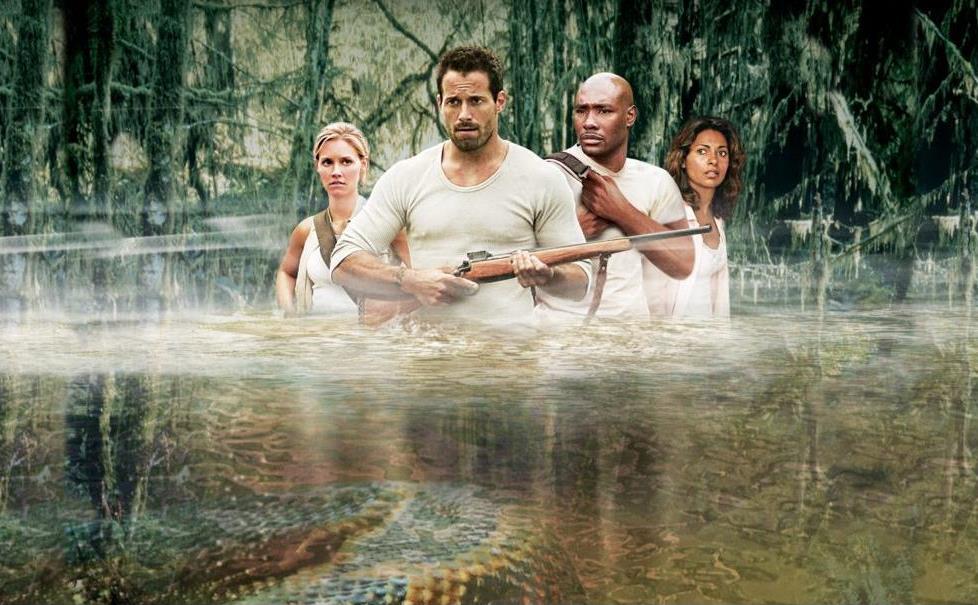 Anacondas – The Hunt for the Blood Orchid. Image: Nightmare on Film Street.

Australian screen composers are one of the craft jewels in the sector. To receive the APRA-AMCOS Distinguished Services Award is a substantial achievement. In 2020, that touch of magic landed on Nerida Tyson-Chew, a composer, orchestrator and conductor who is known most recently for H is for Happiness. She has built an international career while she insists on staying home in Sydney. Family life, community and cultural origins are important to her.

For the last 30 years, Tyson-Chew has composed, scored and recorded here, and travelled to centres like London, Paris, Los Angeles, Toronto and Vancouver for the mix.

What is more, she is fascinated by genre, and works on films like Anacondas: The Hunt for the Blood Orchid, and TV shows such as The Deep, Rescue Special Ops, The Feds, Taboo for National Geographic, and Batman: the animated series. The key line for that is ‘I am vengeance. I am the night. I AM BATMAN!’

An artistic snob she is not. She gave Screenhub a wonderful interview.

‘Several years ago’, Tyson-Chew said, ‘someone asked me about my favourite film and of course I’ve got so many. But I said Galaxy Quest. There’s some subtle stuff in there and I just love its humour. Of course I enjoy normal dramatic films but I think its harder to do a Shaun of the Dead film, I think its more masterful.’

From the very beginning she wanted to learn the piano. ‘A beautiful lady up the road agreed to teach me’, she said, ‘and I just started to do brilliantly at it.’

By the age of 11 Tyson-Chew was at the Conservatorium High School in Sydney studying piano. Behind the scenes she was watching Bill Collins’ The Golden Years of Hollywood with her mother, and was enthralled by the movies. At 14 she watched Psycho and was enchanted by its scary creepiness, until her father cleverly turned the sound off and she realised it was flat and unemotional.

She discovered that, ‘you could write music that would transport a person into a place where they weren’t even aware of their responses, and it was actually emotionally and psychologically manipulative. My path was single minded and laser focused. I went on and did a bachelor’s degree at university in composition, with honours, with the idea that I wanted to study abroad in film scoring.’

Even so, she found the time to meet a boy at a bush dance. They have been friends for 40 years and married for 30. He teaches engineering at a high school and sounds like a touchstone of sanity.

‘My path was single minded and laser focused.’

In the background Tyson-Chew was teaching piano and composition and musicianship in personal classes and at private schools. Saving for the big adventure.

‘I was on an academic scholarship and by happenstance discovered the University of Southern California had a very specific film and television masters of music program.’

She had to showcase her work in a difficult application process.

‘I had to save up a ridiculous amount of money, and record the musicians and send off my handwritten notations before the interview. Fortunately I was selected even though I came from Australia.’

Her entire plan was about coming home. She discovered a remarkable opportunity which is just not available anymore. In the late eighties at UCLA Tyson-Chew was able to study with the older generation of composers who were ending their careers. We are talking Chuck Hayes, Jerry Goldsmith and Irwin Kostal who worked on films like Mary Poppins, The Sound of Music and Chitty Chitty Bang Bang.

She did come home, but then she won the inaugural Academy of Motion Pictures composer internship in 1990.

‘In the end, Australians are very different filmmakers because we do everything. We don’t feel like we have to specialise in one set of tasks. I think its the same for everybody – we’re very innovative because of budget.

‘But also, there is no problem doing it all. We have a great support group. I have an amazing group of people that I assemble every time I have a big production. I’ve worked with lots of orchestral musicians over the years so I always try to hire living musicians throughout production.’

Tyson-Chew’s first feature film was Hotel Sorrento with the late Richard Franklin, where they worked from a traditional flat bed editing machine. She would go to screenings, and used VHS tapes shot off the screen, and ultimately the internationally linked computers of today. But she has always worked to the picture and time-codes.

She is driven by collaboration and enjoys being supportive and serving a director’s stories from the shadows. She is also a voracious reader and screen watcher. ‘That’s just who I am. But I  find it interesting sometimes when I talk to younger composers who want to be film composers, but they’re not actually watching films and reading books. They don’t know stories and want to be just about the music. I can understand that but I think really it’s a way of life.’

‘Australians are very different filmmakers because we do everything. We don’t feel like we have to specialise in one set of tasks.’

The role of her family is really interesting. Tyson-Chew’s father’s father was a musician who played in bands, and both her parents were totally supportive.

‘They have a really grounded outlook on life. For example, if I did a piano recital and I was disappointed in my performance they would say, “Yeah, tomorrow you will play it somewhere else and it will sound really good.” And so I think that’s why I’m able to cope with the high stresses of creating on demand. If something doesn’t work I will just come up with a different thing tomorrow.

‘The ability to focus, without interruption and just inhabit a beautiful space where you’re working extremely fast with clarity is a skill and not everyone can do that.’

But she talked mostly about her mother.

‘She is an extraordinary woman. Her background was as a couturier. As a dressmaker she could look at a person’s form and decide the shape and draw it freehand and design for them and make up the calico form and then the very expensive fabrics and do the embroidery and the sequins that had to be put on it to the deadline.

‘And that’s what I do. I write to a brief, to a budget, to a deadline. And I try to use the highest quality materials using orchestras and musicians rather than sequins and beads. And then there is the business side as a music producer with budgets and accountants.’

She claims, by the way, that her brother is more talented musically than she is. He is an excellent drummer. But he made one fundamentally different choice – rather than his sister’s fantastic dedication, he entered a respectable professional with a more conventional lifestyle. Two different answers to the fundamental artistic dilemma that so many people in the screen sector face.

Nerida Tyson-Chew documents her career well on her website. Here is the music for creature feature Anacondas – The Hunt for the Blood Orchid. I love it.