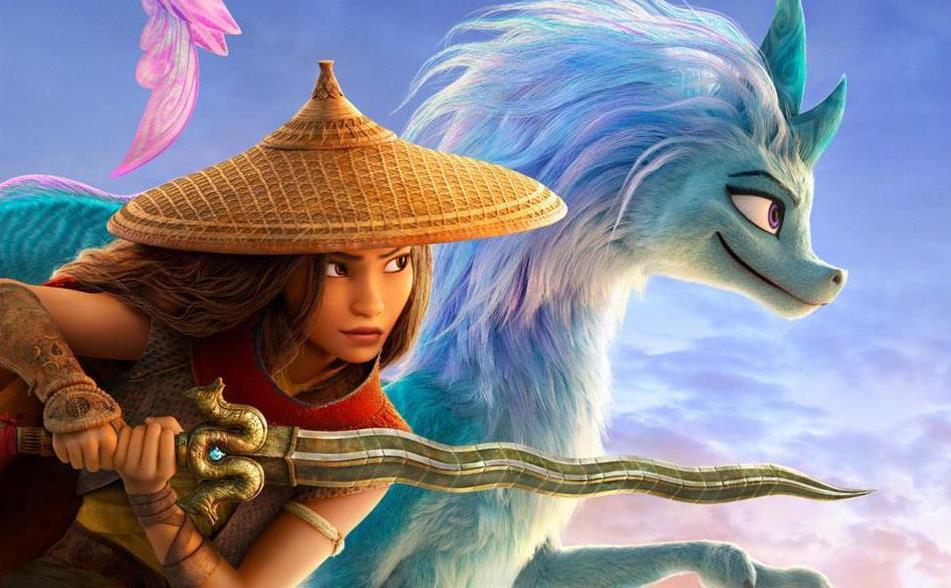 Raya and the Last Dragon lead the charge. Image: Disney

After a year of less than ideal box office conditions, the Easter holidays are giving local exhibitors their first real chance in ages to lure in some serious crowds. But there’s a surprisingly strong line-up for kids too, thanks in part to some holdovers from earlier in the month. Everyone’s hoping a strong line-up plus holidays equals a decent haul at the box office.

There’s not quite as much that’s fresh on offer for kids from the streaming services at the moment, most likely because they largely run to international schedules where Easter just isn’t as big of a timeslot. There are still options for parents looking to steer clear of the cinema, but if you’re looking for a way to entertain the kids, there’s never been a better time to support your local movie house.

Raya and the Last Dragon

Disney’s return to big screen animated features (in-house studio Pixar’s last effort, the high concept Soul, went directly to streaming) is about as traditional as modern Disney gets in terms of story. A warrior princess fights to restore her kingdom with the help of a rag-tag bunch of scrappy sidekicks – one of whom happens to be a shape-changing dragon (voiced by Awkwafina).

It’s maybe a little too crowded and rushed to be fully satisfactory, but the animation is as lush and gorgeous as ever, with Raya and her crew racing through a range of South Asia-inspired locations. The message (trusting others is good) plays out in some interesting ways; for once, fighting doesn’t solve everything.


Suitable for: everyone who likes Disney films, which is everyone.

Based on the critically acclaimed and highly successful YA series The Knife of Never Letting Go, this film from star director Doug Liman (Edge of Tomorrow, The Bourne Identity) was highly anticipated… until word of multiple rewrites and extensive reshoots got out. The result never really lives up to its intriguing premise: Todd (Tom Holland) lives on a planet populated only by men, all of whom can constantly hear each other’s thoughts. Then a girl (Daisy Ridley) arrives and things get complicated.

Much of this hits the usual stale YA movie beats from a decade ago, but there are enough traces of what could have been to make this an interesting misstep rather than a total train wreck. If nothing else, Mads Mikkelsen as the sinister Mayor is always fun; the man cannot give a bad performance.

Suitable for: older kids who are fans of the book; it’s never too early to learn that sometimes the book is better than the film.

Peter Rabbit is back, and as pointed out in Screenhub’s review, he remains a triumph of sassy, smart-mouth style over substance. On the surface this sequel attempts to walk back the in-your-face attitude Peter displayed in the first film with a story about him trying to escape the confines of his “bad rabbit” reputation, but in practice the meta-comedy and constant self-referential winking to camera works better once he gives in and joins a local crime (well, vegetable-stealing) crew.

Delayed a year thanks to Covid, fans of the original have possibly outgrown this franchise’s rapid-fire, sugar-hyped approach to comedy, but there’s always a new generation of kids keen to get worked up at the movies. And if they come out wanting more, there’s always the first film to show them. Don’t bother with Beatrix Potter’s stories though – they don’t have much to do with this version.

Much of the appeal of the original Tom and Jerry cartoons came from their simplicity: Tom (the cat) chased Jerry (the mouse), and violence (extreme) soon followed. This update thankfully keeps the basics intact, with Tom and Jerry spending most of the film running amok in a New York hotel where Kayla (Chloe Grace Moretz) is trying to organise the glamour wedding of the century. Tom also plays the piano, which surprisingly enough was a feature of the original cartoons.

This was never going to be a classic, thanks to the impossibility of replicating the slapstick intensity and violence of the original shorts. But it does manage to capture at least something of what made the duo so popular in the first place, and Moretz is clearly having fun hamming it up reacting to their destructive antics.

If you don’t remember the first Two by Two film, don’t worry; this sequel (which technically ignores the ending of the first film) easily stands alone. Dave and his son Finny are Nestrians, fuzzy blue creatures who seem set to be first on the menu as food supplies run low on Noah’s Ark. Dave’s partner is Hazel, the last adult Grymp; when Finny gets bumped overboard with her daughter Leah the duo end up discovering a desert island where the inhabitants aren’t too keen on being discovered.

The animation is a bit more polished this time around and the pace is hectic throughout – there’s enough going on for three films and the run time is under 90 minutes. This brightly coloured film is best for younger kids, but if they start fidgeting this moves so fast they’ll probably be left behind.

Suitable for: little kids and people who like fart jokes – even a volcano gets in on the act.

The latest instalment in a series last seen in the 90s, this is clearly going for the nostalgia angle, hoping the now-grown fans of the original films will plonk their kids down in front of this 2021 upgrade. The surprise here is that it’s been reformatted into a (limited) series, stretching the usual template – plucky underdogs and a coach (Emilio Estevez) less than enthused about coaching a bunch of losers – out over multiple episodes.


This time around The Mighty Ducks are the hotshots, and when twelve-year-old Evan Morrow (Brady Noon) gets cut for not being good enough he starts his own team (called the Don’t Bothers), and you can probably guess the rest. It’s a solid formula and Estevez brings some charm to proceedings; kids old enough to care about organised sport and adults old enough to remember the originals will find what they’re looking for here.

Suitable for: parents willing to stick it out week after week.

If this isn’t already a classic at your place you simply haven’t watched it enough. UK stop-motion animation experts Aardman (home of Wallace and Gromit) have been winning kids over for years with their Shaun the Sheep TV series, and his first big-screen outing doesn’t disappoint as Shaun and his flock head into the city to track down their farmer (and generally wreak havoc).

Aardman’s skill at over-the-top set pieces and sharp visual comedy is on full display here, and while this is definitely all-ages viewing it’s the kind of kids film that’ll keep adults fully entertained. Warm, smart, funny and refreshingly message-free (aside from maybe don’t let your farmer’s caravan roll into the city where he’ll get hit on the head and get amnesia?), it deserves to be a holiday staple.

Suitable for: Literally everyone

Highly anticipated but not for younger kids, this looks at the relationship between a father (Idris Elba) and his fifteen-year-old son (Caleb McLaughlin from Stranger Things) who’s sent to live with dad in Philadelphia after going off the rails back home. The twist is, the dad is a (literal) urban cowboy, complete with horse, big hat, and a bunch of lessons about doing what’s right – if his son is willing to listen.

Based on the real-life Fletcher Street Urban Riding Club, it’s a setting that’s bound to intrigue, and reports out of the Toronto International Film Festival (where it debuted before Netflix snatched it up) were largely positive. With its occasionally gritty look at urban life, this coming-of-age story has some rough edges to it. But who doesn’t love a cowboy?

Suitable for: older kids and anyone who wants to see Idris Elba in a cowboy hat