Easter films for (avoiding) the family

Nothing says enforced family time like staring at a screen for a few hours without making eye-contact. Let us help you this long, long weekend.
Paul Dalgarno 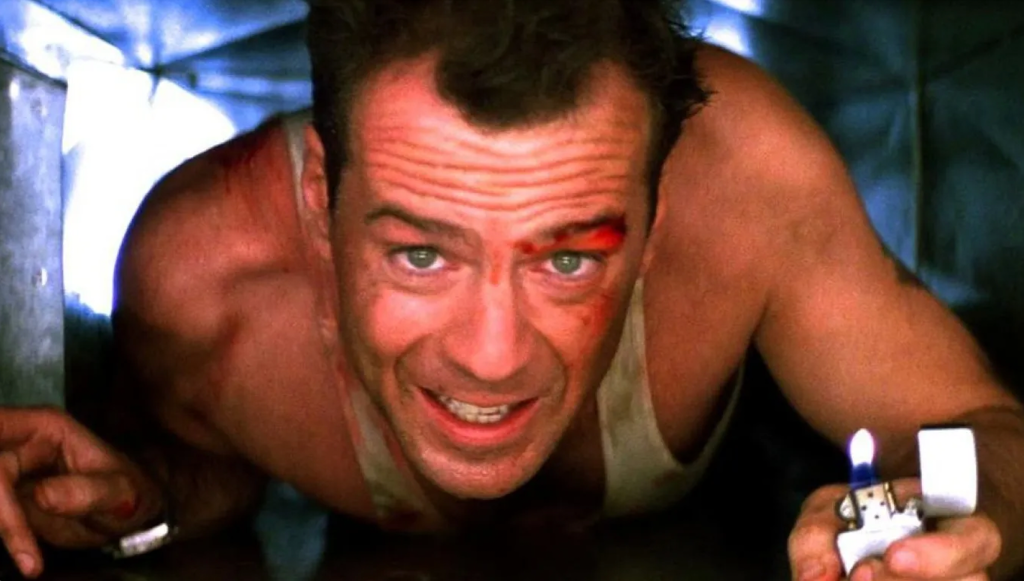 Easter is upon us – those special few days when, for the first time since Christmas, many of us are socially obliged to have a plan of action for things to do with family, or at least concoct a decent excuse for not doing so.

Yes, there are Easter egg hunts, hot cross buns, yes, there are church services … but – also yes – there are many hours in which you might want to kick back, stare at a screen and bite off the head of a chocolate bilby.

Whatever your motivations, here are some Easter-themed golden oldies, bunny bangers and resurrection-worthy modern classics.

Judy Garland, Fred Astaire, Peter Lawford and Anne Miller singing their socks off in glorious technicolour to the music of Irving Berlin? Sure, if you’re into that sort of thing. Easter Parade was a smash with critics and fans alike, the second-highest grossing MGM musical of the 1940s, after Meet me in St.Lewis (1944), which also starred Garland. Enjoy 108 minutes of family laughs, embarrassment, boredom and/ or lingering trauma – especially if you try to engage the children in your life with a hearty singalong.

Nothing says epic like Ben-Hur … With a budget of $15.175 million (more than $135 million in modern money), William Wyler’s film starring Charlton Heston was the most expensive film ever made, with a storyline going from the birth of Jesus to (spoiler alert) his crucifixion 33 years later. At three hours and 32 minutes, this is a guaranteed winner if you want to:

Bonus dad joke: This is great but have you seen the sequel? It’s bigger than Ben-Hur.

A great choice for the rabbit-lovers in your life, particularly the younger ones. As with its sequel Peter Rabbit 2: The Runaway (2021), this one offers stunning animation alongside wholesome family entertainment. Peter, the troublesome rabbit, tries to win over his … Actually, who cares about the plot? It has talking animals, it’s cute, and you can sleep for a couple of hours without anyone noticing. It’s also an opportunity to see James Cordon inhabit an animal, as the voice of Peter, before his even better turn as Bustopher Jones in, um, Cats (2019).

Do say: I’ve just remembered there are lollies in the cupboard.

Don’t say: Yeah, it was fine, I guess, but I preferred the book.

Underneath Easter Island, there’s a factory that produces all of the world’s Easter candy, but all is not sweet in this sugary haven, oh no. The Easter bunny is getting on a bit and wants to pass on the family business to his son (Russell Brand) who doesn’t want to follow in his his dad’s lucky footsteps. He wants, instead, to go to LA and become a rock drummer, hang out with chicks (as in, actual chicks) and, you know, etc. A timeworn tale about chasing your dreams (and eventually having to go back to your dad with your bunny tail between your legs, but not before learning some valuable, family-friendly lessons).

Do say: I think you’ll find it was named Paaseiland (Easter Island) to commemorate the day the Dutch explorer Jacob Roggeveen arrived in 1770, so there’s probably not a candy factory underneath those amazing statues in real life.

Don’t say: Did I tell you about that time I was in a band?

Ah, bright eyes … burning like fire. Definitely darker than Peter Rabbit or Hop, this BBC adaptation of the 1972 Richard Adams novel combines the epic with the ominous to give a more realistic version of what life as a rabbit would be like if they could talk English and communicate the many complexities of rabbithood. Fleeing their doomed warren, a colony of A-listers including James McAvoy, Olivia Coleman, Ben Kingsley and John Boyega, must find and defend a new home. The title track by Sam Smith doesn’t hold a candle to the Art Garfunkel tear-jerker in the 1978 animation but you can still expect trembly lips and itchy eyes.

Optional dad joke: I know what they were going through, poor things; I was served heated bread rolls with lots of different toppings once and came down with a bad case of mixingmytoasties.

For the perfect post-children-in-bed-suffering-from-sugar-overload palate cleanser it’s hard to go past 1987’s Fatal Attraction, particularly the bunny scene. Both iconic and maligned (the labelling of ‘crazy’ women as ‘bunny boilers’ was a particularly bad side-effect) the scene’s shock factor hasn’t diminished in the 35 years since the film came out. Do not watch this if you have, had or at any point will have a bunny rabbit, or an affair, and if you do watch it, try not to stew on it for too long.

Do say: Hey, shall we just watch Hop again instead?

Don’t say: Do you ever think about Flopsy?

Biblical references – tick. Scarily relevant subject matter about the environment making life difficult – tick. Russell Crowe and Emma Watson – tick. Extensive use of non-Biblical sources for the sake of dramatic storytelling and visual spectacle – tick. Darren Aronofsky’s epic film tells the story of – you guessed it! – Noah’s Ark. Jennifer Connelly and Anthony Hopkins add some actorly oomph while Crowe delivers his brooding Gladiator-best as a complex man struggling with the maths of two by two.

Bonus dad joke: I think they could have worked on the story arc a bit more.

As we’re told on the Rise of The Guardians Wiki Fandom page:

E. Aster Bunnymund is the Rise of the Guardians re-imagining of the Easter Bunny, speaking with an Australian accent and known as the Guardian of Hope. Bunnymund is a Pooka, a philosophical warrior rabbit, and used to live in a village with other Pookas on his homeworld before they were wiped out, leaving him as the only survivor. He currently lives on Earth in his Warren, an oasis deep under the surface of Australia that is said to be the birthplace of spring.

Which in no way explains that accent!

Who can forget John McLane, bloody and bruised, swinging barefoot from a high-rise while police below gingerly unwrap their Easter eggs? Not for nothing is this considered one of the great Easter action films of all time – one man to save a group of hostages trapped below at an Easter-Eve party, including McLane’s estranged wife and daughters. Will they get back in time for the Easter Vigil? Will this be Mclane’s resurrection?

Don’t say: Isn’t that tinsel on those trees?