Canada provides much better support to their arts and screen sectors than Australia. What are we doing wrong?
David Tiley
[This is archived content and may not display in the originally intended format.] 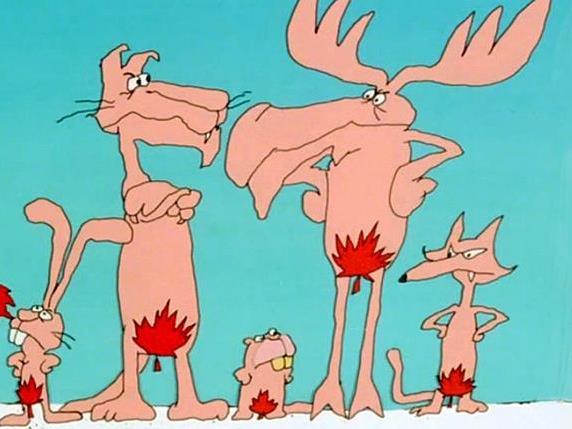 Image: Still from Who Are We, a film about Canadian national identity by Czech-born animator Zlatko Grgić, who was lured to the Canadian National Film Board in 1969 after he made a film on scabies.

While the Australian creative community is reeling from cuts, the Canadian government has announced $1.9b in Canadian dollars for arts and culture funding over the next five years.

That will almost double the Canada Council’s annual budget of $182m over five years, with $40m extra in the next year. The Canadian Broadcasting Corporation will receive an extra $675m. Similar increases apply across the museum sector as well.

Read: O Canada! How can we be like you?

Is there something about Canada that encourages people to understand the value of culture, and the importance of arts funding? Something as powerful as the gut level disdain with which millions of Australians despise creativity?

Valerie Creighton is the inaugural President and CEO of the Canada Media Fund, which spends $371m annually to support the Canadian television and digital media industries, funded by a public-private partnership involving the local cable industry.

She was previously responsible for the Saskatchewan Film and Video Development Corporation and the Saskatchewan Arts Board. While she runs a large national funding organisation, she is still deeply involved with The Red Horse Ranch in Saskatchewan – worth noting because the centralisation of arts power in Australia would make that impossible.

‘I think it’s the size of the country,’ she says. ‘We’re a massive country, but we are very isolated, unless you are talking about the cities of Montreal, Toronto and Vancouver.’ While Canada and Australia have quite similar populations (35 million in Canada to Australia’s 24 million)  the demographic shape is very different – Australia being more urbanised with our key cities clustered on the eastern seabord. Sydney has almost twice as many people as Toronto.

A model for good ideas

It was set up just after the end of World War 2, when the community was very poor. The Premier was the legendary Tommy Douglas, a Democratic Socialist who ultimately led the NDP in the 1960s. So his vision ran much wider than the prairies. This was a time in which enduring public institutions like unemployment benefits in Australia or the British National Health system were set up. Douglas also introduced North America’s first universal public health care system in Saskatchewan. People were more able to see themselves in terms of the society, and culture was somehow included in the enduring fabric.

‘I think somehow people in this country have an understanding and a belief that it’s [the arts]  an important part of the expression of who we are as a people and a nation, says Creighton. I’m being very lofty in my statements because we too have an ongoing struggle, and a consistent argument to put forward.’

That idea was expressed again when the first version of the national screen funding body, Telefilm Canada was set up in 1967. ‘There was an understanding,’ says Creighton, ‘from the public sector that Canadian ideas and talent and story were an important fabric of the nation, and because of our small country and our inability to finance TV in a major way, the decision was made to ensure through government support that the content exists and has a shot to succeed in the world market.’

Has the role of the French-Canadians made a difference?

‘Oh, absolutely,’ she says. ‘The level of finance that the Province of Quebec has put into its industry is the envy of the country. There’s clear pride and sense of culture. They have their own star system. When a TV series is run in English-speaking Canada at the top end it will be a million five, in Quebec it’s regularly two million or three million.

‘And often politically when the system is under threat, it is the voice of Quebec that carries the country because of the strength and understanding and their knowledge of culture.’

But the two cultures are distinctly different, and she is not sure that understanding flows consciously into the decision-making. They are forcing the outcome because they carry such a strong voice.

‘It really was [French Canadian capital] Quebec which lost [former Prime Minister Stephen] Harper his first majority government, just in terms of the voraciousness and the voice around culture the Quebec has. So it certainly has a very, very large influence.’

But the Harper Government, which has been thoroughly gazumped on arts commitment by new Prime Minister Justin Trudeau, created the Canada Media Fund, an initiative of James Moore, the Minister for Heritage and Official Languages, was born in 1976, and represented a riding near Vancouver, deep in right wing British Columbia.

‘He was a young minister and very digitally savvy, and I think he had a sense of where the market in content was going to move. So he collapsed the old Canadian Television Fund as well as a Canada New Media Fund that Telefilm Canada administered together, and he established the Canada Media Fund. That change meant that all applications from producers had to be television and one other platform.’

‘There was a great hue and cry across the country because everybody was against it, right from our funders down to the Unions and Guilds because people just didn’t see the point. What it has demonstrated in the last five years is that it was a really advanced way to look at both content creation and consumption and distribution.’

Mostly, producers worked out how to put their linear content online, or out to mobile phones and tablets, and take advantage of the large streaming services. But there was a smaller but persistent focus on transmedia and interactivity.

Why the Canadians have been leaders in interactive content is a small mystery, particularly since cultures around the world started on a level playing field around the millennium. Australia, for instance, had the Digital Media Fund at Film Victoria, and the Australian Film Commission created a visionary strand of interactive documentaries.

But those initiatives died in Australia, while the Canadians simply piled in more. The National Film Board of Canada has been developing computer animation technology since 1974; by 2009 it was streaming its own films, and developed an iPhone app that October. The screen community was challenged in 2013 by the decision to devote an entire quarter of the NFB production budget to interactive media. Outside the bureaucracy, the children’s television producers were steadily developing websites to go with series, and became an international leader.

To some extent, the Canadians had an edge because they went into games and CD-Roms as a commercial venture. Electronic Arts, the gaming and publishing company developed in Vancouver, and Montreal was an important centre as well. According to Creighton, ‘It just seemed to be that creators in Canada have always been interested in technology and digital technology, so maybe those two factors combined led us to be a little bit more advanced than other countries.’

The situation for the arts in Australia has always been much tougher. We seem to be collectively anti-intellectual and compulsively pragmatic. We hunger for stories and works from Britain and the United States, and honour our own people only once they are recognised overseas.

We have been forced to fight back in hard-nosed economic terms, and here we seem to have an advantage over the Canadians.

‘I have been at this work for about 35 years now,’ says Creighton, ‘and we have not done a good job as a sector positioning our real impact in terms of jobs, of economic impact, for Canada’s visibility all over the world.

‘Our ministers now say – there’s been a bit of work to get there – that the media sector in Canada is larger than agriculture, forestry and insurance put together. The whole industry is now focused on telling that story a little better to the Canadian public, as well as telling the rest of the world.’

Without the luxury of genuine if divided cultural patriotism, our cultural argument, particularly in the screen and broadcasting areas, has been driven for a long time around that very old adage: money makes the world go round.