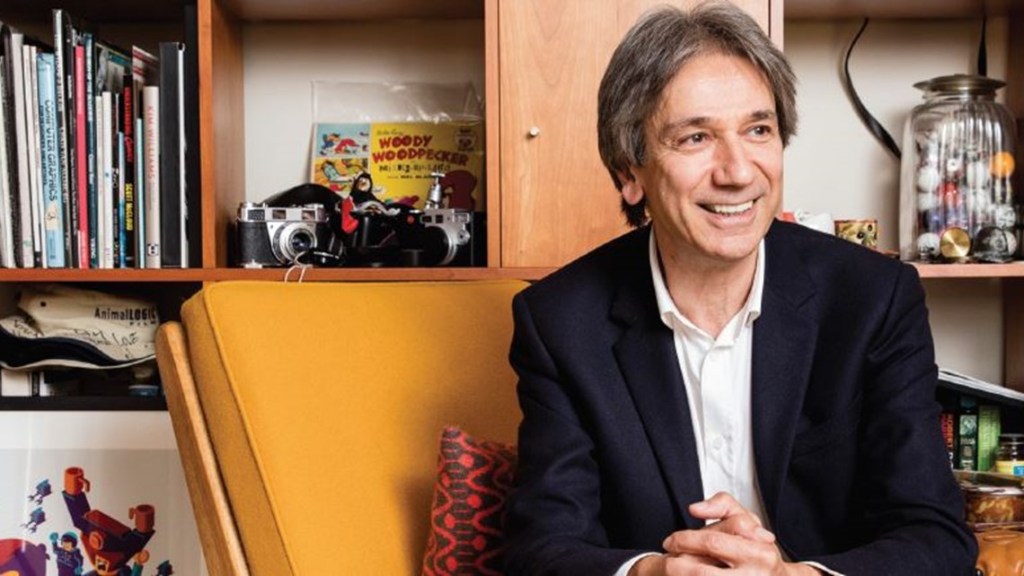 Animal Logic’s Zareh Nalbandian at ease with the camera.

It is now thirty years since Animal Logic was born from the remains of Video Paint Brush by Zareh Nalbandian and Chris Gregory. In 1991, the decision to create a high-end VFX company to work on television productions and commercials must have felt like a leap into the deep ocean with lead boots and an untested oxygen supply.

A long time ago…

The sector was cheap and cheerful, location-driven, pushed by brash ratbags who hadn’t even seen Los Angeles airport. The Quantel workstations they used probably cost around $500,000 each, and Photoshop had just been launched. Baz Luhrmann was setting up Strictly Ballroom, while Round The Twist and Tonight with Steve Vizard were on the box, while art directors had not yet discovered the male ponytail.

By 1995, we knew the company could be great as it did the animation for Babe, and then Babe: Pig in the City. It worked on The Matrix, Farscape, Moulin Rouge!, Planet of the Apes, The Lord of the Rings, Hero, Harry Potter and the Goblet of Fire. It was an international service company.

But Nalbandian had a singular vision, which would take most of his working life. For the last fifteen years, he has pushed singlemindedly towards genuine animation blockbusters which the company owned and controlled, recently crowned by the success of both Peter Rabbit films.

As he said to ScreenHub, ‘As I always say we’ve had good and bad financial years but we’ve never had a creative failure over the 30 years of Animal Logic. And I think that that’s what propels us as a company. And, you know, continues to open doors for us with all these new opportunities.’

Even though Animal Logic is a substantial Australian company with offshoots in Vancouver and Los Angeles, those opportunities always rely on deals with major studios. So the company made Lego Movies through Warner Bros Animation, and then achieved artistic control on the smash hit Peter Rabbit and its Covid cousin Peter Rabbit: The Runaway which were both made with Columbia Pictures and distributed by Sony Pictures Releasing.

But even these films don’t have the budgets of a Disney or Pixar blockbuster. ‘I feel like there is a temptation to just go for quantity, not quality. But being a private company, being an Australian company, and really being focused on creating great work, I’m pleased to say we’ve avoided that temptation’ he said.

‘I think our focus on family is really, really making a clean distinction as to the kind of pictures we will take on and where we will go. I am pleased to say we turn away more projects than we take on.’

Right now, Animal Logic is making Shrinking the Treehorns, in a deal with Ron Howard and his company, Imagine Entertainment. Also firmly on the books are four other films in partnership with major studios. Perhaps the most iconic is Astro Boys, a personal passion of Zareh Nalbandian which he has stuck to, seemingly forever.

‘We’ve had a very clear aspiration and we’ve invested in it which put us in a very unique position in Australia and probably globally for an independent company’ he acknowledged. ‘But I just want to make the point that our animation and visual effects, and overall production industry is second to none. Look at the work that other companies produce out of Australia, it’s so fantastic.’

‘Toby Nalbandian, who is my son, is one of the two executives there, and he has been in Australia probably for six of the last eighteen months. It is obviously a little more difficult with Covid, but there’s a really strong set of relationships with Australian writers, directors, and producers.’

Where are we going?

I asked Nalbandian about the future of the sector. Who else can answer this question so well?

‘I think animation, visual effects, virtual production now, all those lines are blurring, so of course the future of animation in Australia is going to evolve. But we have to stay at the forefront of innovation, invest in training and infrastructure and IP development. Otherwise, we will be left behind.

We ask: ‘What would you do if you had the power to create new ways of supporting the sector?

Nalbandian says: ‘I love that question. Firstly, I would make sure that support structures from federal and state governments are constant, consistent and globally competitive.’

‘That would make sure that we would avoid the cyclicality of our industry, and avoid the skills drain that occurs when production is drying up, and the challenges we face with things ramp up again.

‘Consistency is key, because it allows companies to invest in training, infrastructure, in research and development, and retain a really skilled workforce that can be available in the projects, as opposed to scrambling to build teams.

‘Secondly, I would double down on investing in education, in skills development and in research. I think the key to the creative industries in Australia in general, is ultimately going to be skilled people – artists, technicians, crew, production talent. And we have to invest in education and skills development, otherwise we won’t be able to realize the opportunities that we have.

The power of education…

‘We have the Animal Logic Training Academy with UTS,  which I’m really proud of. We have a great traineeships team with Create New South Wales. We have our own internal training programs. We have many other training initiatives for leadership within the company. Companies pay lip service to saying it’s all about the people while the company is the people and we really invest in training and developing people.

‘The trick is not to think of animation –  it’s about choosing the right medium for the right story. Some ideas are best as limited series, some as features, some fully animated, or hybrids. Some projects rely on visual effects or virtual production. I think the key is that there is a lot of crossover in those skill sets and if you train a digitally savvy young workforce who can work across all of those different mediums, ultimately you’re going to have a huge world of talent in Australia that can do anything.

‘The other side of that is the development side which is investing in writing, IP development, encouraging Australian writers to think more broadly. I don’t think we do that particularly well in Australia because the funding isn’t there to invest in writers to advance their careers.’

‘Great Australian writers move to Los Angeles and make five times as much and they never come back. I would love to see greater growth and investment as well, in Australia developing talent whether it’s writers, directors, or optioning materials. Really taking our time to develop stories to be ready for production, rather than rushing into production, all the things we’re all aware of, but, you know, it all takes money.’

‘I’m really interested and jumping into the publishing side of storytelling.  We come across so many great stories and so many talented people, but sometimes we think we just can’t see our way forward to developing this as a feature film, or even as a series, but it would be great to get the story told. And it’s a lot more accessible to publish a graphic novel, or children’s illustrated book than it is to make a TV show. So I’m really fascinated by that space and I think that that’s a new frontier for us that’s really exciting.’

Thirty years of Animal Logic is a tribute to the people, to both the staff who have taken the company through many changes, and to the freelancers who have brought their own contemporary magic to each project. But it also owes something to Zareh Nalbandian’s own background.

‘My parents were Armenian,’ he said, ‘and my wife is Malaysian-Chinese so my kids are a really nice mix. But yeah, my parents escaped the Turkish genocide of Armenians in the 1920s and I was born in Cairo, but moved to Australia when I was six. I’ve got a very interesting history, both as a first-generation migrant and as a refugee.’

‘I really believe my parents sacrificed so much to get to Australia, to give me the opportunities I’ve had, that I work really hard to realize those opportunities. I always challenge myself when I think things are getting difficult that these problems are nothing like what my parents faced. I’ve got this opportunity, it’s mine to screw up, and I’m not going to because my parents have sacrificed too much to get me here.’

‘So I do think that’s in my psyche, and in a little way, it is probably what gives me the appetite for risk in Animal Logic to pursue things that maybe aren’t obviously safe to go for. At the end of the day, they are not big risks, as long as you are doing great things.’