Production crises make for good stories, but we don't normally think of the bankers. John Smithson describes the contract crisis behind Sherpa.
David Tiley
[This is archived content and may not display in the originally intended format.] 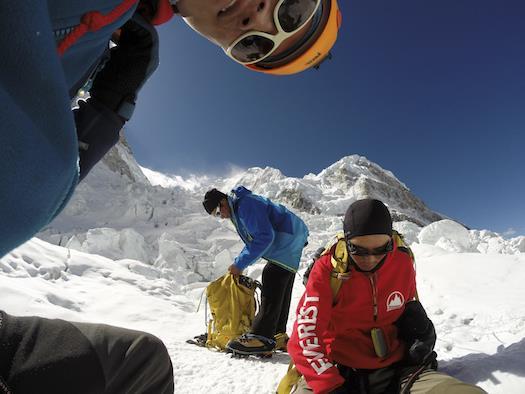 UK producer John Smithson has put his nervous system in harm’s way with a passion for documentaries with enormous scale, the superdocs which require huge resources and often cry out for cinema release.

He is coming to the Australian International Documentary Conference to talk about these challenges, but he is also in some senses part of the antipodean documentary family.

Bridget Ikin and John Smithson produced Sherpa, written and directed by Jennifer Peedom, and the subject of a detailed case study at the conference. When Peedom brought the project to Felix Media, the company owned by Ikin and John Maynard, it was impossible to avoid. After all, Ikin is a New Zealander and her family lived in the same street as Edmund Hillary. But Peedom also already knew Smithson who became involved as it gained an international dimension. He brought in Universal, who are distributing it internationally and stayed as producer, rather than a more distant executive producer.

Sherpa neatly illustrates the problem of uncertainty which can be a truly terrifying twist on the craft of documentary making. It can be like traversing a glacier surrounded by lawyers.

‘There was a massive great problem on Sherpa,’ Smithson explained on Skype. ‘The film we had set out to film, and had been agreed with the financiers, we could not do because of the avalanche on that day in April 2014, which changed everything.

‘That is as good an example as you are going to get when you’ve got a major crisis, a tragedy, and you have somehow got to create a film that you didn’t envisage and get your financiers to agree to it.’

The original film was a ninety minute cinema documentary about an ascent of Everest from the point of the view of the sherpas. They go to the summit over and over again, lugging caches of oxygen and equipment to prearranged dumps, setting lines and anchoring ladders, all to drag privileged Westerners to the high point of their egomaniacal lifetimes.

It is a lovely idea. Two very different ways of being and seeing the world intersect, from Sherpa families in their smokey homes to grumpy climbers trying to get their money’s worth. How do you see the mountain if your family has lived by its rules and spiritual call for centuries? Why on earth do pampered Westerners want to climb it and beat their chests on the summit? Beneath it all is the increasing tension of Sherpas objecting to the deal, and the dangers, and the friction with their clients.

In the middle of the project, fourteen thousand tonnes of ice fell off the mountain, and sixteen sherpas died. The story is transformed, and we follow the rescue effort, the grieving, the rage and defiance of the Sherpas, and the closure of the Everest adventure for the season.

To me, watching in my comfortable cinema seat, it seems like the perfect dramatisation of the issues, in which our curiosity turns visceral and we are swept into everyone’s pain and frustration.

‘That is what you are seeing in the aftermath.’ said Smithson. ‘That meant we did our job. It didn’t seem like that at the time.’

The producers were no longer able to guarantee that the film would be made, and they were effectively unable to work to the initial contracts. They were asking for a significant act of trust by the financiers.

Over his long career, Smithson has focused strongly on ordinary people in the proverbial extraordinary circumstances. He has been involved in several films about 9/11, because it was about the transformation of a normal, hundrum morning with thousands of people checking into another routine day, only to see their building explode around them.  He has made films about both the Banda Acheh and Japanese tsunamis. His extreme adventure films focus on crisis and personal transformation.

‘What works best is a powerful close-up story in the foreground, and then a bigger physical backdrop, and in terms of bigger-picture issues.’

To this we can probably add another dimension – his central characters, however ordinary, have a common quality of self-revelation. How they respond tells us about them. They probably all rely on resilience and some quality of self-awareness, at least to the point of trusting themselves and transcending their inner demons.

Smithson accepts that his work is becoming increasingly paradoxical. ‘The world is getting increasingly risk averse,’ he said, ‘and I accept there is some tension between wanting things to be done with super-ambition and fantastic stories, and making a guarantee that you will deliver them. That’s why the job doesn’t get any easier, and why doing this job is not for the faint-hearted.’

At the same time, mainstream television and cinema is under attack from the fragmentation of the marketplace and the rise of new players, mostly on SVOD.

‘Everyone is looking for the content that will really create appointment viewing. One of the ways you do it is by doing programs which have an ambition, a quality, a degree of revelation and insight that really makes you want to watch it.’

At the same time, he believes audiences are searching for authenticity. ‘I think people want the revelatory true stories, which we want to see in all its gritty reality. Audiences aren’t stupid and I think there has been a backlash against super-structured reality shows – guys with tattoos and Harley Davidsons and all that.

‘There is a market for those revelatory documentaries that reflect the absolute reality of an event, which says some interesting things about humans.’

While he loves cinema documentaries which hold an audience spellbound in the dark, honouring the promise made to them, he is also pragmatic about release opportunities.

‘You make films for the big screen, and you spend a lot of time on the music and the sound design and the mix and the grade of the picture and get all those elements to play, but ultimately I’d rather have somebody watch it on their laptop than not watch it at all.’

How did Smithson find his antipodean family?

Felix Media also thinks he is very very nice. That quality, mixed with the focused, lucid intensity I found on Skype was probably useful dealing with Universal.

At the moment, Jen Peedom is tracking Sherpa’s screenings on Facebook, as the film helps to raise money to rebuild after the earthquake which happened almost exactly a year later.

It will be released properly in the cinema at the end of March in Australia and New Zealand. It is really something.

4:3 Films has a​ good  interview with Peedom by Brad Mariano.

Producer Bridget Ikin with yaks. She is not sitting behind a desk. Image: Felix Media.