Nintendo's latest game creation tool is defined both by the Switch's limitations and the impressive breadth of creative expression it enables.
Damon Reece 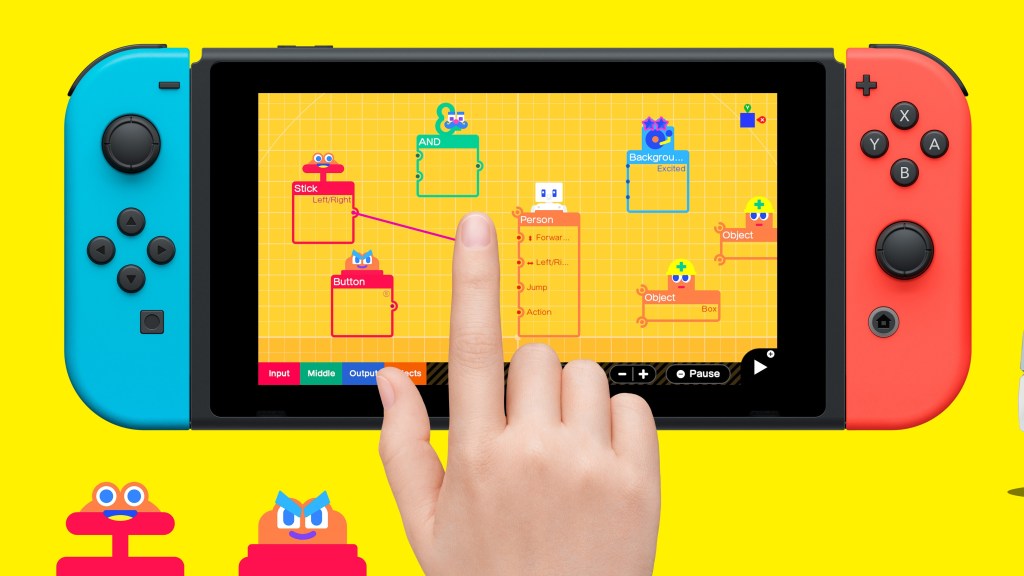 Recently in the Australian press, a great number of column inches have been devoted to criticism of a new maths curriculum spearheaded by skills- and experimentation-driven approaches to learning. Its proponents argue that a conceptual understanding of maths trumps rote learning of times tables, better preparing students for the real world, where we learn through trial and error. Its detractors argue that the old ways we taught kids are fine, actually, and that nothing should change. And, to absolutely nobody’s shock, the usual suspects have tried to turn it into a culture war, because everything has to be a culture war these days: new-school learning through experimentation and—yes—failure, versus emphasis on rote memorisation and logic. Nintendo’s new game creation toolkit, Game Builder Garage sits firmly in the conceptual camp, and presents a great example of the benefits of this school of thought.

Following in the footsteps of other creative tools like Nintendo Labo’s Toy-Con Garage and the Super Mario Maker series, Game Builder Garage at first throws you into an unskippable and frustratingly restrictive tutorial, taking you through the particulars of its visual coding system. It’s composed of an assortment of cute Nodons, each representing a different object or code concepts, allowing you to draw links you draw between them. It doesn’t make a lot of sense to begin with – why not give players immediate access to an unrestricted sandbox?

As it turns out, game development is a beautiful garden strewn with discarded rakes, and I am Sideshow Bob. Nintendo was right not to leave me to my own devices. Game Builder Garage enables the creation of many kinds of games you’d recognise, from simple platformers to side-scrolling shoot-em-ups to full 3D creations, but every single one of its tutorials is fundamentally trying to express the same thing: even the simplest game is more complex than you realise.

As I went through more of the tutorials, the more I appreciated the insistence on hand-holding; almost every step introduces a bug or unintended behaviour, and the emphasis is always on understanding the error: debugging it, iterating upon it, and learning how to make the game act the way you’d like it to. It even covers adding debug-only tools, like the ability to pause scrolling in the shoot-em-up game so you can test whether collision and enemy behaviours are functioning correctly.

It’s an inspired way to teach newcomers how games are built, and its concepts are directly applicable to more professionally oriented game engines like Unreal Engine, with its impressive and well-supported Blueprint visual coding system, and Unity, with its slightly less field-tested Bolt system. Anyone who’s spent time with visual coding systems will be right at home in Game Builder Garage, and I would expect the inverse to be true as well. Nintendo isn’t trying to reinvent the wheel here: instead, they’re refining it, and presenting it in an attractive package for people who wouldn’t necessarily think of taking their first dive into game development through learning how to use a major engine, intimidating as they can be. I appreciate what Game Builder Garage is trying to do, and I can’t wait to see creators wringing the engine out to its absolute limits.

Not all of Game Builder Garage is as refined as its editor, though. Its teaching methods might be new-school, but by dint of it being a Nintendo product, the experience of using the software can be as liberating as it is frustrating. For one, the sharing features are extremely limited, with no in-game method to browse other people’s creations à la Super Mario Maker. Instead, players are pushed to social media and purpose-built websites to share access codes for their finished, uploaded games. It’s understandable, given that it would be essentially impossible to moderate each and every creation by hand for inappropriate content, but it’s deeply unfortunate that there isn’t at the very least a curated list of games to download, play, and dissect.

Additionally, the toolkit is let down by its strong insistence on building games in the Nintendo Switch’s handheld mode. Building in docked mode is possible, but the user interface actively disincentivises controller use: the onscreen buttons are minuscule, and selecting them with a thumbstick-controlled pointer is an exercise in misery.

The only way to build games and actually enjoy the process is to use the Switch’s touchscreen, which is, itself, frustratingly small, a caveat Nintendo seems to be beginning to address with the recently-announced Nintendo Switch OLED Model. It’s funny to think this, given the 2012 console’s relatively frosty reception, but I think Game Builder Garage would have been better on Nintendo’s previous console, the Wii U, with its second screen and ability to swap views between the controller and the TV.

As it stands, I find myself hunching over my launch-model Switch, squinting at small text and cursing quietly to myself as I hit the wrong tiny on-screen buttons with my adult-sized fingers. I desperately wish for a bigger screen, since it’s all that stands between this toolkit and almost-perfection, but in the end, it’s only the sheer gentle quality of the tutorials that keeps me engaged and willing to come back.

But that’s okay. The concepts and approaches that Game Builder Garage teaches you are all directly applicable to more serious toolkits and engines like Game Maker, Unreal Engine, and Unity: concept-driven learning will enable nascent creators to shift between tools and approaches with ease.

Just as we saw a whole generation of developers from the days of Adobe Flash and the creativity it enabled, so too will we see a generation of developers who in their youth cut their teeth on this, and other similar tools – after all, there are already thousands of user-generated games available for download, even if Nintendo has abdicated the responsibility of hosting the directories. In that regard, it is – and hopefully will be remembered as – a success.

A copy of Game Builder Garage was provided for the purposes of this review.

Damon Reece is an award-winning game writer by day and aspiring cadaver by night, known for their work on Necrobarista and Hacknet - Labyrinths. They live in the outskirts of Adelaide with their two terrible cats. You can find them on Twitter: @demanrisu