From The Tracker to Gladiator via Romper Stomper, twenty key scores by Australians

Bathe in twenty of the best Australian compositions for film, chosen by Andrew Urban, based on the winners of the Screen Music Awards. Lots of clips!
Andrew L Urban
[This is archived content and may not display in the originally intended format.] 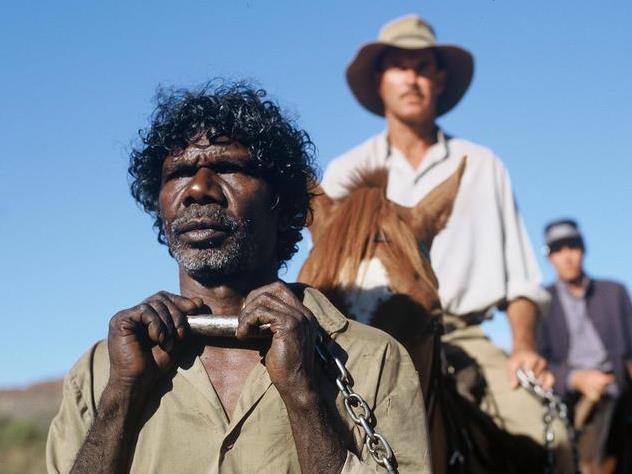 With the 2017 Screen Music Awards celebrating the work of screen, Australians can be proud of outstanding scores by outstanding Australian screen composers over the years. Here are just 20 enduring film scores, compiled by film critic Andrew L. Urban, editor of Urban Cinefile.

Their praises are rarely sung (other than by their peers) yet Australian screen composers have created many acclaimed and awarded scores for Australian – and international – films. And some others are underrated gems. This list of 20 is by no means comprehensive or complete, but gives an insight into the depth of Australia’s screen composing talent.

The APRA Feature Film Score of the Year award-winning score plays a powerful and important role in this somewhat Faustian story about a desperate young father finding work evicting home owners in the wake of the US sub prime loans fiasco. The score harnesses emotions of anger and resentment, melancholy and regret in a complex mix of musical colours. Timpani is ever present, a musical hammer symbolising the films themes and a reference to the young carpenter at the centre of the story.

Anacondas: The Hunt for the Blood Orchid (2004)

In what is a deceptively difficult genre (creature feature) the composer faces the challenge of staying true to the needs of the genre yet finding creative ways of making the score fresh, unpredictable and fun – fun to compose and fun to admire. This score achieves those goals and defies the musical snobs who dismiss this genre. The sublime musicality of a cue like A Horrible Realisation is testament to real screen composing talent. Reviewing it in Urban Cinefile Brad Green notes: ‘Drums rumble low like the movement over a jungle floor, or slithering within a river, of denizens unseen but obviously hefty. Exotic pipes flutter overhead like leafy canopy. Lighter percussion rustles and clicks in random bursts, joining with muted sighs of brass and woodwind to suggest all manner of insect, amphibian and reptilian life.’

Partos has composed a gutsy score with plenty of light and shade that helps underpin the ill-fated journey of a crime family, helping to propel the film. There is a certain grandeur to the score that gives the films themes a universal dimension, expanding the drama beyond the confines of the family to encompass the human condition.

‘ … an original, full orchestral score in the classic tradition … driven by impressionistic piano and sublimely arranged strings, that is potent, complex and engaging from first cue to last. His score is fashioned on the age-old resource of finely tuned dissonance, with measured resolutions. So as to keep us enthralled, and our imaginations ticking. If one of the scores strengths is its fluidity, this fails to suffer with two middle cues that branch off into lounge jazz and mambo,’ says Brad Green. The score won the 2001 Australian Guild of Screen Composers Best Music for a Feature Film Award.

As Louise Keller writes in Urban Cinefile, ‘Music has much to do with the mood of Ana Kokkinos searing adaptation of Rupert Thomsons sexual novel, and like the film, Skubiszewskis score is both bold and challenging.’ He comes up with a wonderfully rich, string-laden score that complements and drives the films mood. It won the Film Critics Circle Best Music Score Award and was nominated for an AFI Award.

Another one of several award winning film scores by Skubiszewski, Bootmen shows the extraordinary range of this screen composers imagination – contrasting with, say, the haunting cues in Blessed (2009). The intensity of his pounding soundtrack is the emotional magnet that compels us into this world, where dreams are not only the motivation, but also the catalysts for relationships and the pathway to survival, as described by Louise Keller.

This is a brilliant, bravura orchestral score, from the gutsy overture to the end credits, parading Australian screen composition on the world stage (as it were), with an Oscar nomination to boot. (And an Anthony Asquith Award for Film Music at the BAFTAS.) Hirschfelder’s innate sense of music as a manipulator of our emotions guides his choice of instrument and colour, and the score can shift the mood from the royal to the intimate. It also works wonderfully as stand-alone music … but not as background. You must surrender to it.

Lisa Gerrard’s singular contribution to the score is its most memorable and remarkable feature, her vocal stream of visceral consciousness is an injection of emotion direct to our sensibilities.  This is a great example of music capturing the emotional mood of a film – for all time.

Director Michael Mann convinced Lisa Gerrard (co-founder of iconoclastic band Dead Can Dance) that her talents were well suited to screen composing and bustled her into her first movie job on The Insider, where her work helped win a Golden Globe nomination for Best Original Score. Notable for its eclecticism and vibrancy, ranging from ambient dread, to choral to jazz to timpanic, with stylish flexibility, the score is an underrated gem, with the cue, Sacrifice, an outstanding sample.

‘This is unalloyed atmospherics: a two-bar, two-chord motif repeated and embellished throughout eight mood-evoking cues. Theres a distinct absence of variety and melody, but an abundance of improvisational noodling. Crystalline guitars intertwine with cymbal splashes, and a background of light, ethereal sound effects—the aural equivalent of the unsettling vicissitudes that lurk beneath any suburban, bourgeois idyll,’ comments Brad Green. Its Paul Kelly minimalism at its best.

Gordons terrific, multi-coloured and delightful score with its light but sure touch appears effortless, when in fact it took great skill to blend the musical idioms that colour the score. Gordons score won the 2010 APRA Best Feature Film Score Award.

Beautiful colours in this orchestral work of subtle elegance and deep emotions, shifting from gentle to powerful with great control. It won the 2007 APRA Feature Film Score of the Year Award.

‘ …wordless, ethereal vocal harmonies that comprise the essential Lunar leitmotif. Even an obligatory didgeridoo is used tastefully and non-gratuitously. However, the details of the terrain and the pangs of loss and cultural conflict central to the film are most vividly echoed in Hannan’s own violins. Lyrical phrases ranging from folksy sweetness to edgy dissonance carry both the drama of the story and the aesthetics of the landscape. And they blend, fold and contrast perfectly with warts and all guitar plucking full of audible, tactile fretwork as fascinating to the ear as a ragged, craggy mountainside to an artists eye…’ as Brad Green so eloquently puts it.

The complex musical colours work to evoke genuine emotions throughout. Yeo makes great use of instruments from the films Laotian setting, seamlessly integrated with western instruments. This score was the APRA Feature Film Score of the Year and was also nominated in the AACTA/AFI Awards.

In amongst the extraordinary piano pieces played by David Helfgott, the subject of this biopic, Hirschfelder was challenged to write original music in service of the story. This is one of the toughest challenges for a screen composer, in a sense competing and in a sense complementing the great, iconic works (eg Rachmaninoff’s 3rd piano concerto). Hirschfelder sticks to his instincts and delivers work that is profoundly sensitive to the subject, not subservient to it. It earned him an Oscar nomination, among other awards, including from his peers.

Rightly winning several awards, the score for this powerful and ever relevant film bristles with an edgy score, introduced by a growly prologue that announces the darkness to come.  Cue titles capture the neo-Nazi mood: Mein Kampf / Fuhrer Fuhrer / Lets Break Some Fingers / The Dead Nazi March. But the saving grace of this score is its creative musicality. Its often more understated than the cue titles suggest.

If you want to hear an example of a gritty love theme, the one composed for Two Hands is recommended. Its a love theme devoid of schmaltz, yet it abounds with emotion. As well as underscore, Skubiszewski senior contributes three other tunes to the soundtrack, each a wonderful example of his eclecticism, from the rhythmic Walking Kings X to the expectant drama of Staircase and the smooth saxophone driven jazz of Fletchers House.

The ninth film on which director Rolf de Heer and composer Graham Tardif  collaborated: ‘… so we had a close working relationship. And the songs also perform the function of cinema music. So he (Tardif) wrote the songs knowing that. Then I wrote the words and I knew they had to resonate with the images but not describe them.’ Many of the scenes are meshed so effectively with the music that it is hard to believe they weren’t created simultaneously.  Tardif’s music and Archie Roach’s vocals combine ‘to produce a powerful paean to freedoms lost, and the strain of cultural tension,’ says Brad Green.

You want some bonus tracks?
This is truly scarey…

And here is Lisa Gerrard with Cezary Skubiszewski

The Screen Music Awards is an annual event staged jointly by APRA AMCOS and the AGSC (Australian Guild of Screen Composers). The event showcases the outstanding achievements of Australian composers across 12 categories including compositions for documentaries, short films, mini-series, advertising, childrens television and feature film scores. The 2017 Screen Music Awards take place on Monday 13 of November at the Recital Centre in Melbourne.