Helen Mirren reprises her Academy Award winning role as Queen Elizabeth II in this highly-anticipated West End production.
Liza Dezfouli
[This is archived content and may not display in the originally intended format.] 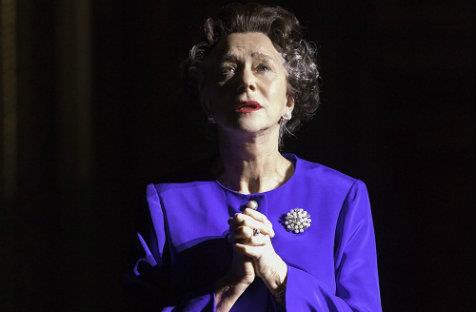 Helen Mirren is a superb actor, never more so than when she plays HRM Elizabeth II. This time she’s doing it on stage in Peter Morgan’s The Audience, a play which imagines the exchanges between The Queen and her respective Prime Ministers during the traditional Tuesday evening chats (established by Queen Victoria). What happens in the second storey drawing room of Buckingham Palace, stays there; in The Audience Morgan posits that the Queen has fulfilled a sort of confidante/therapist role to a succession of the UK’s PM’s over the last 60 years: 12 government leaders beginning with Churchill (here played by Edward Fox) all the way to the current Prime Minister, David Cameron (Rufus Wright). By all accounts Elizabeth II is a quick wit and in The Audience she is given rein (pun intended) to exercise it at the expense of her sometimes hapless Prime Ministers.

Direction is by Stephen Daldry in the grand Gielgud Theatre in the West End rather than Southbank’s Olivier. Daldry handles a work which nearly borders on the hagiographic, but avoids doing so thanks to a deft balance of reverence, charm and poignancy, realising an emotional depth in the play that could easily have been lost.

The tone of the production very subtly sends up the formality of life in Buckingham Palace, especially when the Equerry (Geoffrey Beevers) holds the stage. Charlotte Moore is a beautiful presence as young Elizabeth’s Scottish Nanny, Bobo MacDonald. Mirren, naturally, is outstanding as the monarch, who she portrays at various ages, from a young woman of 25 through to the 87 year old of the present day. Mirren’s costume changes involve significant sleight of hand given that they occur on stage.

Obviously, Morgan has had to invent most of what transpires in the play. The relationship between Harold Wilson (Richard McCabe) and the Queen is surprising in its almost affectionate camaraderie. He practically blusters and she responds to his ribbing of her in an easy going manner, giving the impression he could (and would) have said anything to her – somewhat hard to believe. Fascinatingly, you can see the influence of Tony Blair on the current PM through the performance of Rufus Wright – it comes as no surprise when we hear how much Cameron admires Blair (who doesn’t feature in this work but who had his moment in Stephen Frears’ film The Queen). An outraged Thatcher is overplayed a tad (by Hadyn Gwynne) but this is theatre after all. All the acting is magnificent – the joy in these National Theatre Live productions is seeing splendid performances in such detail.

As an historical document and an exercise in nostalgia, replete with immediately recognisable and iconic images, the play delivers nicely, but what it does best is reveal the cost to the woman Elizabeth of Her Majesty’s public life and the inevitable isolation involved. Whatever you may think of the institution, the play says, you cannot deny that the Queen does an exemplary job as monarch. Morgan and Mirren’s Queen has a shrewd understanding of what’s required of her and some poignant moments play out between the maturing Elizabeth and her 11 year old self (Bebe Cave).

National Theatre Live’s presenter, the annoying and gushy Emma Freud, interviews Peter Morgan during the interval and it’s a heap of fun watching him try not to give in to his irritation at her inanity.

Oh, and there are live corgis!

In limited release from 5 July: see website for details