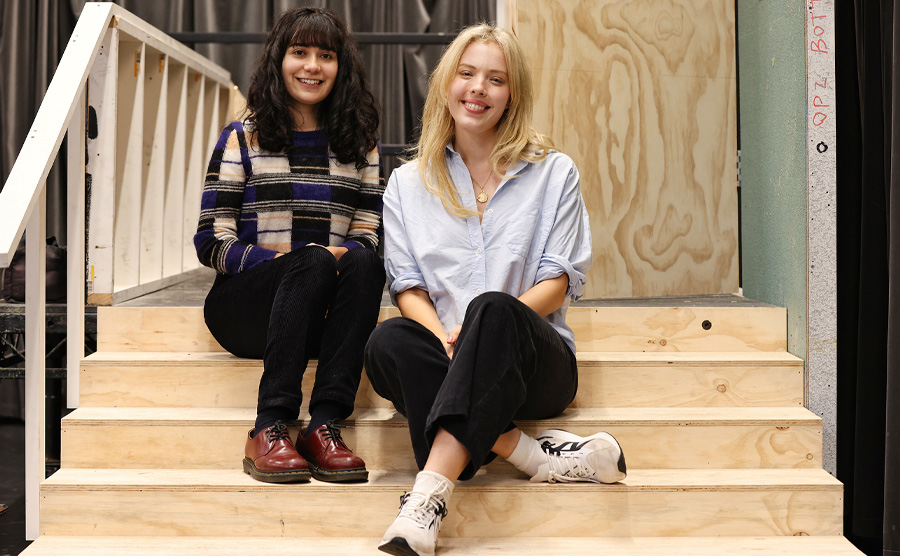 Stories – especially dramatic stories – help us make sense of the world, he continued.

‘In some ways, story is culture and culture is story. It’s who we are. It’s how we think. It’s how we make sense of the world around us. Dramatic storytelling in particular because this isn’t just about me telling you how the world is. This is me giving you an opportunity to experience how the world is, and I think that is an incredibly powerful thing.’

Hepworth, who has amassed considerable experience as a screenwriter for film and television, is equally committed to empowering people from diverse communities to tell their own stories.

‘I ran my own company back in the UK and our tagline was basically “the most interesting stories come from those people who have the least opportunities to tell them”. So I did a lot of work with the Gypsy-Roma community, I went out to Africa, to Malawi and I did a film there. I worked with children from disadvantaged backgrounds, disability groups, mental health charities, with veterans … really just helping them to tell their own stories, and they were just the most amazing stories,’ he said.

Having already combined writing his own screenplays to producing and directing a range of short films, documentaries and animations, Hepworth was surprised to find his career taking him in a new direction – and to a new country.

‘What took me by surprise – and that probably is the right word, on reflection – was moving into the education space,’ Hepworth said.

‘Alongside my writing, I was running writing workshops and projects with charities and community groups. It was all centred around providing people with the confidence and skills to tell their own story and stories that mattered to them. And from there it was a small step into education, I suppose.’

Today, Hepworth is working at NIDA as Head of Writing for Performance, a position previously held by playwright Stephen Sewell. He’s already made significant developments to the Master of Fine Arts (Writing for Performance) during his first few months in the role, including developing a greater focus on writing across dramatic forms and creating sustainable writing careers.

‘What we’ve been doing is looking at the career paths of our graduates and our alumni and looking at how writers are employed these days, and where those income streams and creative possibilities are. Theatre will always be at the heart of what we do at NIDA but a lot of our graduates are going into television now as well. And of course a lot of writers work across both, because that’s how you build sustainable careers.’

Hepworth is keen to focus on dramatic storytelling in all its forms, believing that the course should cover everything from theatre, film and television through to interactive and immersive work, games, even dramatic podcasts. ‘Having them understanding the different forms of dramatic writing is the quickest way to cement their understanding and ensure they’re adaptable. The course isn’t just about creating writers for now, but about creating writers for the future.

‘We’ve also been doing a lot of consultation with industry – with theatre companies, with producers, with broadcasters, with writers. Really just going out listening, talking and seeing what they need from us … because it’s really important for me that we are not just serving our graduates but we are also seen to be serving a wide ecosystem and generating new writers – writers who have the skills and the understanding to fulfil the needs that are out there,’ he said.

Hepworth is also keen to ensure that NIDA is fostering new writers from diverse backgrounds.

‘And not just because it’s the right thing to do, which it is, but because those new voices, different voices, are telling interesting stories that we haven’t heard enough or seen enough before.’

The success of NIDA’s MFA (Writing for Performance) is illustrated by the calibre of its graduates, including 2017 alumnus Emme Hoy, whose adaptation of The Tenant of Wildfell Hall is now playing the Sydney Theatre Company’s Roslyn Packer Theatre. Hoy is also a writer on the new Stan series The Jump alongside fellow MFA Writing graduate Gretel Vella.

One thing such writers share is an instinctive knowledge of what makes a good story – a trait which NIDA’s MFA (Writing for Performance) can help them hone and train.

‘I think it’s quite difficult to teach that instinct, but assuming you already have a sense of it, it’s really then about how do you develop it and put it to best use?’ Hepworth explained.

‘Because obviously, we need writers who have a deep understanding of craft, are able to take script notes and deliver on commissions but they also need to develop their own voices as a writer, discover the kinds of stories they want to tell and what they want to say through their characters. Why are they the only person that can tell that particular story in that particular way? And I think having a space like NIDA in which you can learn to do both of those things, is very precious indeed.’

Applications for NIDA’s MFA (Writing for Performance) are now open until 30 September. Learn more about how to apply.