The South Australian-made Wrestledunk Sports pits players against each other in games that can leave everyone roaring with laughter.
Hope Corrigan 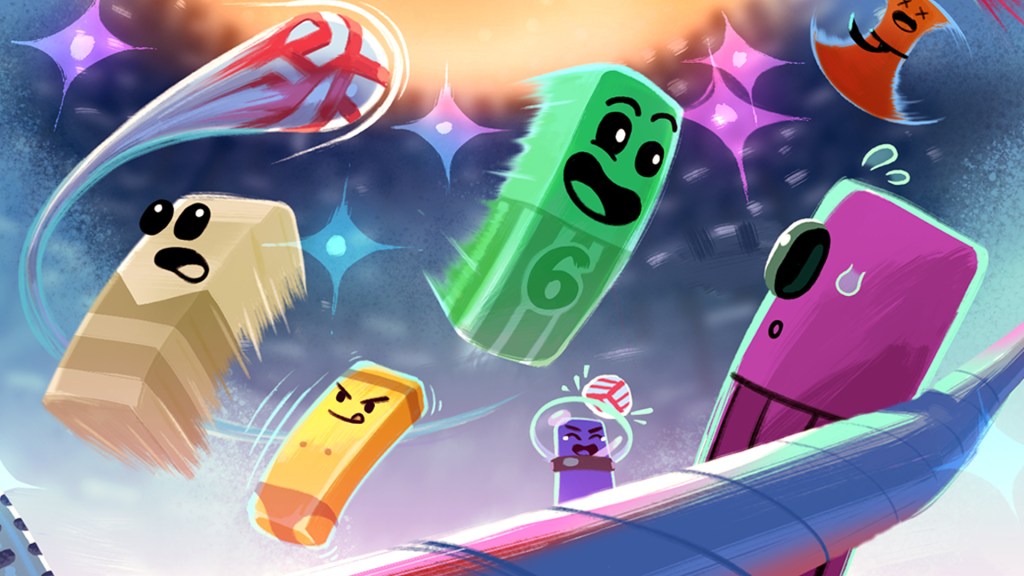 I still get sore feet when I think about the first time I played Wrestledunk Sports on the PAX Aus show floor. It was the night before the convention would open, and a colleague and I accidentally spent over an hour standing perfectly still on the raw concrete, completely engrossed. It wrecked me for the rest of the convention, both physically and mentally – I couldn’t take a single step without the souls of my feet screaming, which would instantly cast my mind back to that sweet, competitive party game action.

Wrestledunk Sports pits up to 8 players on two teams against each other to battle it out in high-energy abstractions of 4 different sports: Wrestling, Fencing, Volleyball, and… the space ball thing, something of a cross between Dodgeball and Breakout. The premise is wonderfully simple and so are the controls for each sport, with only a few basic inputs and abilities for each making everything super easy to pick up and jump into.

But the approachable controls also quickly heightens the competition in the race to master the ‘difficult to master’. Or, perhaps it just more quickly opens the door to moments of exceptionally entertaining dumb luck as you try and wrangle the game’s law of physics to your advantage.

Nailing a winning spike in Volleyball after you’ve messing it up and self-scoring every other time is euphoric. Strategically squashing foes by diving on top of them in Wrestling feels just as good as accidentally flinging yourself off the bouncy ropes and getting the win anyway. These moments are unforgettable while they’re happening, and as they continue to happen they compound into a euphoric overall sense of joy. Wrestledunk Sports is chaotic elegance distilled into a pure, party game form. It feels as effortless and unpretentious as a game like this should be.

Effective simplicity extends into the overall presentation of Wrestledunk Sports as well. Characters are represented by rectangular blocks, which can be given a variety of costumes, but the real personality comes from their wonderfully expressive cartoon faces. The looks of triumph and disappointment are laugh-out-loud hilarious during a close match, but can often accurately and playfully mimic the mood of the player at the time too, which encourages you to laugh at yourself, building on that rowdy party game environment.

Explosions, crash-zooms, and fire effects during tense moments of the game all add wonderfully to the experience. The expressions of the similarly rectangular commentary team in the background of the stages are also great, though it can all be easy to miss amidst all the action.

Wrestledunk Sports is a beautifully fun local multiplayer game. Passing controllers, laughing at your friends, pointing and screaming in their faces, are all a big part of what makes games like this fun.

But it’s also all the things I’m not allowed to do in a pandemic.

Being in lockdown means the closest I’ve come to this is on the couch with my partner. Two-player Wrestledunk is less hectic and in some ways almost feels strategic. There’s more value in mind games – trying to bait the other person into a false move and seizing an advantage – but events lose steam far quicker than with even a single extra player in the mix.

The game features options for AI-driven opponents and online play, thankfully, but as with any game designed specifically for a local multiplayer experience, it’s not quite the same. Networking problems, when they happen, can obviously make the whole experience much, much worse. But even without those issues, the party atmosphere Wrestledunk Sports is so good at creating isn’t as easily sustained in this kind of format.

Playing online means players must all join a lobby before starting a game, and there’s no quick way to opt-out of a round – everyone present must participate, which really harshes the carefree vibe. Dropping out means creating a new lobby, which is quick, but requires actions taken from all involved.

Often you’ll find yourself playing many more rounds in a row than what might feel is natural, which can grow tiresome, especially in smaller groups. And it’s harder to take a break, pop out, and watch others play while you laugh at them and soak in all the little details that make Wrestledunk Sports great. A lot of the magic is sadly lost.

But I’ve still cried from laughter at least once playing with friends on the network. And I’ve still had an incredible time with Wrestledunk Sports both online and off. I’ll happily continue to long for the day where I can play it with other people in person again.

I’ll even take the sore feet.

A copy of Wrestledunk Sports was provided for the purposes of this review.

Hope Corrigan is a game and tech journalist who likes to live on the cutting edge of art and science. You can find her work on sites such as this one, Byteside, PC Gamer, GameSpot, IGN, and more. You can also find her on Twitter @Hope_Corrigan, though results may vary.