TV Review: The Beach is gorgeous but deeply puzzling 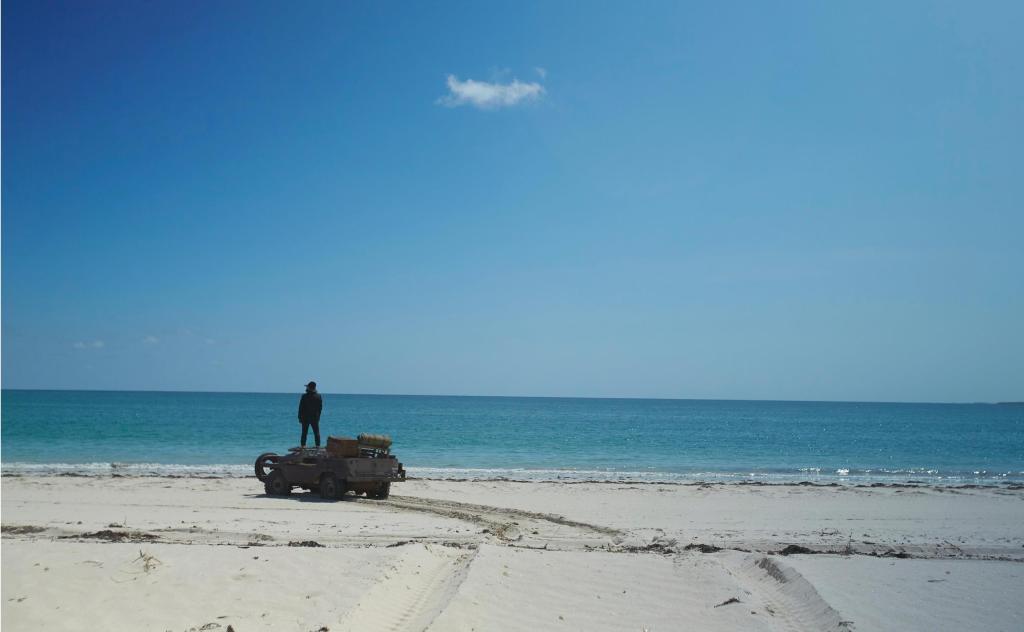 Since I’m going to spend the bulk of this review nitpicking – puzzling over the point of it all – let me start with the executive summary: Warwick Thornton’s six-part series is a blinder. Gorgeous. Fascinating. It’s a deeply personal gift for our solitary times. See it on free-to-air, if you can, on the biggest screen you can find. The half-dozen half-hour episodes are screening back-to-back this Friday, on NITV. I’ve watched it twice already and have made a start on a third viewing.

The premise of The Beach is that Thornton, a cinematographer and director, is taking time-out from his punishing schedule at a shack on the tip of the Dampier Peninsula north of Broome. He spends many weeks off-the-grid: talking to his chooks, fishing, foraging, chopping wood, fixing things, cooking, playing his guitar and sleeping. But mostly prepping and cooking food.

It’s a fiction, of sorts. Obviously, he’s not alone. His son Dylan River – another extraordinarily talented cinematographer – is filming him, from near and far. Presumably, there’s a sound recordist and other crew. Even if you are in a shack without power and running water at the outer edge of nowhere, solitude is not a relative thing. You’re alone, or you’re not. And, straight up, two questions: firstly, what is this an act of? Quietism? Asylum? Penance? Rehabilitation? Secondly, and more to the point, why does that act need a witness?

I confess, it took me a while to quell my rebellion against the ‘lie’ at the heart of the piece. I would have preferred it if Thornton had filmed himself (less brilliantly) rather than ask me to suspend this much disbelief. But in powerful opposition to the fiction of the premise is the carefully engineered fact of the finished work. The truth is in there: shot by shot, edit by edit. The SBS PR team have been circumspect when it comes to Thornton’s demons and why he might have needed to get away from it all. But the demons could hardly be more obvious.

Late in the first episode, Thornton is shown chopping palm sugar into snortable lines with a machete-sized kitchen knife. ‘I have no idea what I’m doing,’ he mutters with a conspicuous sniff. A minute or two later, we see that he has chopped up lines on his own body. Shot through a tent of gauzy white insect netting, Thornton’s tee-shirt sleeve rides up to show us where he has cut himself. This is not the scarification of initiation, these are the self-inflicted scars of a ‘cutter’. Likewise, the choice of music (Rowland S. Howard’s Shivers) and imagery (a literal black dog to match Thornton’s metaphorical black dogs) wordlessly telegraph what’s at stake.

For the most part, Thornton’s directorial choices are strong, and tactful. A rope thrown over the rafters – which turns out to be attached to a cast net (used for fishing) – is a rare, but glaring, exception. And, as much as I hate to say it, music is overused in The Beach. (Perhaps to compensate for the lack of words.) Thornton used our peculiar and unique soundscape – more distinctive than our big skies if you ask me – to much better effect in his 2017 western Sweet Country and in his Southern Cross documentary from the same year We Don’t Need a Map.

There’s a whiff of self-mythologising too, which Thornton pulls off at a price… I can only recall hearing laughter once (I’m not even sure it was Thornton’s) when his rickety old Toyota jeep gets bogged in mud. (Incidentally, it’s the Alkemi farm getaway car used in the first episode of series 2 of Mystery Road, which Thornton directed and shot.)

Apart from Dylan River’s magnificent cinematography, the other highlight of The Beach is Thornton’s cooking. Using the most basic equipment – a wok over a wood-fire, a mortar and pestle, a hand-cranked mouli grinder, good knives and good ingredients – Thornton makes refined and intricate dishes. He makes his own belacan. He makes a chawanmushi from scratch for god’s sake! His attention to detail reminded me, weirdly, of Buddhist monks making a sand mandala. The prepping is an act of devotion. The finished work is seen once – in all its glory – then is gone.

Thornton’s culinary acts of devotion don’t heal him, but they kick him from weary listlessness to something a tone lighter. If he doesn’t finally shake his black dog, he at least learns how to play like one… chasing seagulls into the sunset.