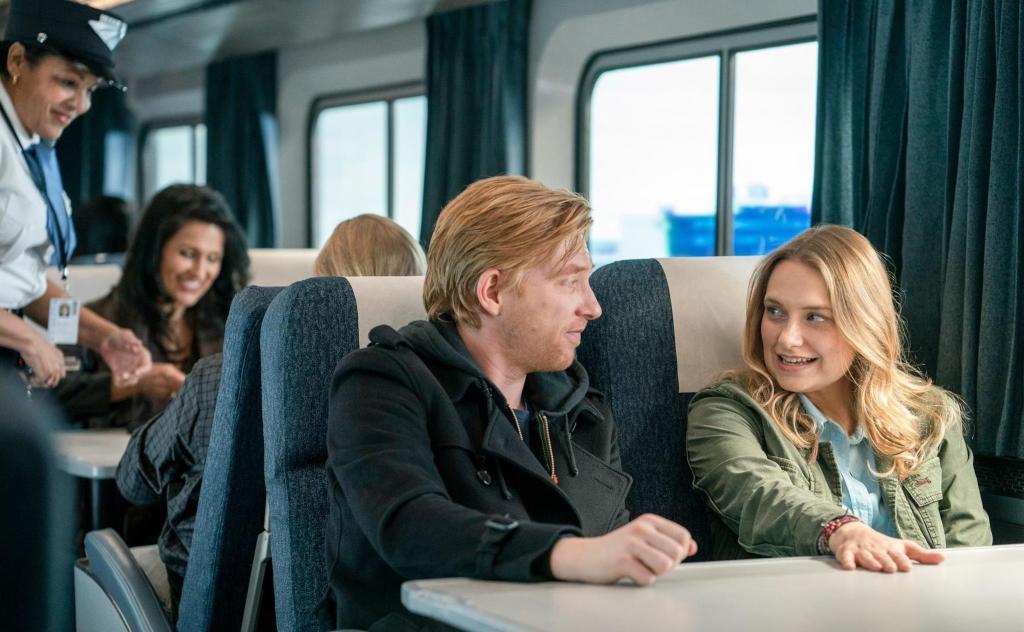 Have you ever felt a sense of existential panic and unease, like you’ve forgotten your best self in the past somewhere, like a bag on a train? Have you ever felt so stuck, so desperate, that you wanted to just leave it all behind? To run?

That’s how Ruby Richardson (Merritt Wever) is feeling as she finds herself behind the wheel of a large automobile, outside a suburban Target, having just purchased a yoga mat and fielded a fretful phone call from her husband Laurence (Rich Sommer). Same as it ever was.

Or was it? At this crucial moment, Ruby gets a text message from her old college boyfriend, Billy Johnson (Domnhall Gleeson). A single word – RUN. With shaking fingers, Ruby taps RUN in reply. And then, just like Ruby, Vicky Jones’ romantic comedy series is off.

Jones is best known for her collaborations with Phoebe Waller-Bridge, who executive-produces Run and guest-stars in three of its seven 30-minute episodes. Perhaps Run – an HBO series screening here on Foxtel – might appeal to those mourning the Fleabag-shaped hole in their lives. But it’s very much its own animal. And it’s dreamier and more elliptical than the action-packed romp promised by its title.

The opening scenes are breathless as Ruby impulsively hops a flight to New York then the first train from Grand Central station after 5pm, barely stopping to invest in lipstick and dry shampoo. Only as the Amtrak heads to Chicago does she really pause to wonder what the hell she’s doing. But by then she’s met up with Billy, who’s now a smug self-help guru. And the series has fun teasing out what – and whom – they’re both fleeing.

Hints of noirish intrigue occasionally surface – a scorned husband; a bag full of cash; a hot stranger (Saamer Usmani); a woman of mystery (Archie Panjabi); and two dogged detectives (Tamara Podemski and Shawn J Brown). But this is no Strangers on a Train-type thriller that harnesses a train’s forward momentum. Rather, it’s leisurely and talky – much more like Richard Linklater’s Before Sunrise in the way it imagines the train as a liminal space where fantasies of romance and reinvention can play out.

The series infuses impersonal public spaces with intrigue and eroticism, as if to suggest the sexiest striptease is to shed boring everyday responsibilities like jobs and relationships. There’s one delightfully slapstick sequence, wittily directed by Australian TV veteran Kate Dennis, in which Ruby and Billy make out in a cramped ‘roomette’ of the Amtrak train.

Ruby’s and Billy’s journey of self-discovery – and the playful, teasing way they rediscover one another – is mirrored in the experience of watching the series. Run is a writerly show that unfurls gradually and in emotional, character-driven moments, rather than in clearly signposted actions that crank the mechanism of an intricate plot. Every episode ends on a note of mystery and ambiguity, and it takes several episodes to really hit its straps. Plot-hungry viewers may find this frustrating – but it’s definitely a show to save up for a binge.

The pleasures of Run lie in just being with its characters as they abandon themselves to the journey. And its secret weapon is the chemistry between Wever and Gleeson, who are absolutely convincing as former lovers thrown back together in their thirties. They know each other, but they also know they’ve both changed – and while they’re wary about repeating old mistakes, they’re also intoxicated by the prospect of recapturing their younger, more carefree selves.

Wever, particularly, is wonderful to watch as she cycles through Ruby’s turbulent feelings. She elevates Ruby beyond ‘bored housewife’ clichés, embracing her wit, her ruthlessness and her ability to surprise herself. Billy is initially the more opaque of the pair, and Gleeson – who’s often cast in nerdy, tightly wound roles – has fun with his character’s shaggy douchebag persona, even as he also reveals Billy to be a fragile, self-loathing man who’s lost faith in the platitudes he’s made a fortune from peddling.

Is their reunion truly star-crossed, though, or are they living out an immature fantasy that will only hurt them and the people they’ve left behind? Run definitely has fun in this ambiguous space. While it was made before the coronavirus pandemic, it’s alluring now because self-isolation has robbed so many of us of our mobility – but we understand even more keenly now what kind of intimacies, even misleading ones, can unfurl at close quarters when ‘normal’ life falls away.

Run is ambitious, and sometimes frustrating, because it refuses to snap clearly into focus. But that’s also something to admire about it. Jones toys with the genre conventions of the film noir, the crime caper and the love-on-the-run romcom in order to deconstruct them as different kinds of fantasy. We love to imagine versions of our lives in which we are romantic heroes… but real life is always messier, and neither Ruby nor Billy truly is who they expect each other – or themselves – to be.