Anthony Morris sings the praises of the ABC's consistently charming Tasmanian comedy as it launches its final season.
Anthony Morris 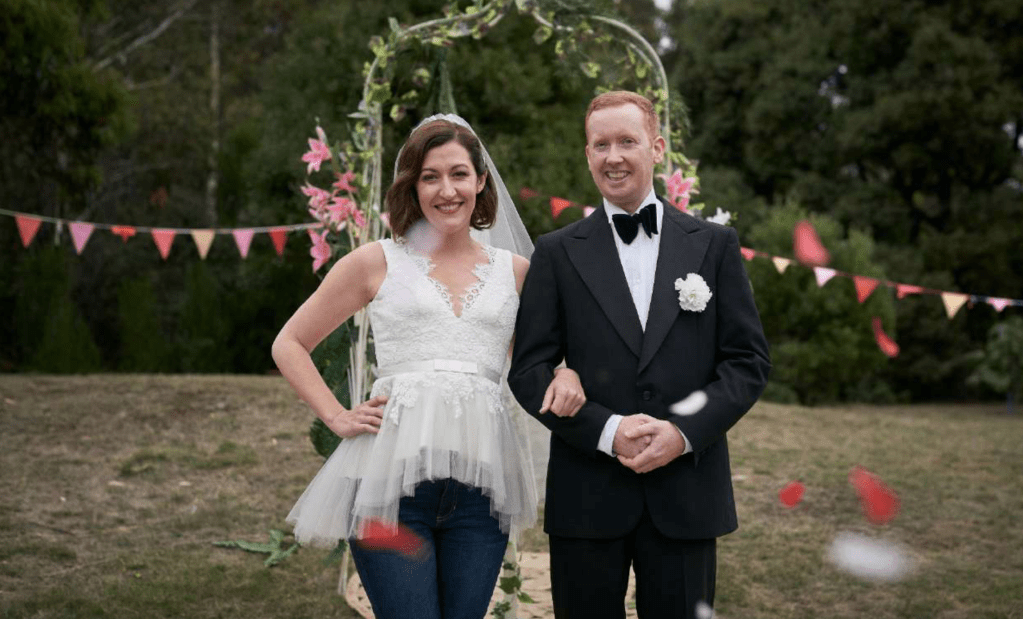 Is this wedding for real? The photo filename ‘Rosehaven Fake Wedding’ suggests not. Courtesy ABC.

Tasmania couldn’t ask for a better advertisement than Rosehaven. Over the last five seasons the adventures of best friends Daniel (Luke McGregor) and Emma (Celia Pacquola) at McCallum Real Estate have shown off the Apple Isle to consistently charming effect. Scenic pastoral views, quirky small town locals, and stories that constantly come back to the power of hanging out with your best friend; it’s a comedy that feels more like a vacation.

The first episode of season five revolves around the high stakes plotlines of a): Daniel needing a new car because his current one smells of pig, and b): Emma having to extricate handyman and former lover Damien (David Quirk) from the clutches of the local neighbourhood watch, who have him doing an endless series of chores. Uniting the two plotlines is a ride-on mower, which is fun to ride on.

Scenic pastoral views, quirky small town locals, and stories that constantly come back to the power of hanging out with your best friend; it’s a comedy that feels more like a vacation.

Future episodes continue the mix of low-stakes storylines – with the ongoing thread that the boss of McCallum Real Estate, (and Daniel’s mum) Barbara (Kris McQuade), is possibly looking to retire. There is genial silliness, and occasional appearances from comedy legends like Anthony Morgan and Damian Callahan. This season is also the final of Rosehaven, which comes as a real surprise. It’s rare that an Australian sitcom makes it to five seasons; even rarer that an Australian sitcom makes it to the end of its run feeling more in tune with the times than when it began.

Over the last decade or so, comedy worldwide has been shifting towards a kind of sincere earnestness. It’s more about likeable characters and a lightness of tone than going for big laughs. First airing on the ABC in 2016, Rosehaven was ahead of the curve in that regard; it’s always been a series about a (mostly) drama-free friendship, with Daniel and Emma basically written as carefree teenagers (despite being twice that age). Or more accurately, Emma is the carefree one, with Daniel as the uptight one despite there being next to nothing to be uptight about.

Rosehaven is the kind of low stakes pastoral viewing that never goes out of style, partly because it’s never ‘in style’. When you’ve got a lot of nice countryside as a backdrop, then half the battle’s won, whether you’re making a cosy British crime drama set in a small village, or a Nordic Noir set in a land of ice and snow. Rosehaven knows what it has and isn’t afraid to show it off: between almost every scene there’s a sweeping shot of the Tasmanian countryside or a close-up of the quaint small town streets of Rosehaven.

It was also ahead of the curve when it came to funding. Back in 2016, the ABC was rapidly moving to a business model where outside funding was a major factor in whether a series would be made. The ABC’s then comedy chief Rick Kalowski said a few years later, ‘If you can’t co-finance your scripted show internationally it’s not because it’s too local, it’s because it’s not good enough.’

Fortunately, Rosehaven had already locked in an outside funding source. At the start of this this year they announced they were putting half a million dollars into the series via Screen Tasmania for the fifth series. As a press release earlier this year announced, ‘To date, the Tasmanian Government has now invested a total of $2.45 million in all five seasons of Rosehaven, and about 500 Tasmanian cast and crew have found work on the show.’ That’s a pretty solid return on their investment.

McGregor and Pacquola have said they’re wrapping the series up because they felt like they were running out of stories to tell. That’s understandable, even if Rosehaven was never about the stories. It’s a series about two friends enjoying each other’s company in a gorgeous location. If you’re on its wavelength, it’s the best half-hour getaway on television.