Nuclear tests were just part of a longer story, as told by Larissa Behrendt's excellent documentary made as a condition for filming 'Operation Buffalo'.
Mel Campbell 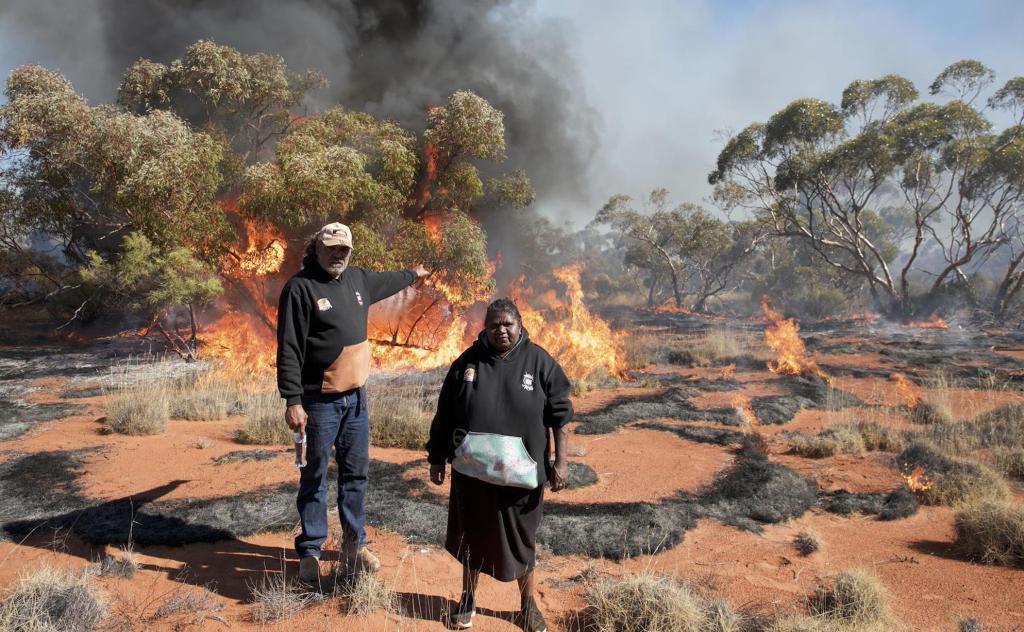 To many Australians, the word ‘Maralinga’ means the British nuclear tests carried out in remote western South Australia from 1956–63 – rendered cosily as a Cold War crime farce in ABC’s recent drama series Operation Buffalo. But Maralinga is not just a place. It’s a sovereign nation and a people: the Maralinga Tjarutja, whose land this has been for more than 60,000 years.

Accordingly, Larissa Behrendt’s 52-minute documentary Maralinga Tjarutja, made as a condition for permission to film Operation Buffalo on Maralinga Tjarutja country, takes a broader view than simply the fallout from the nuclear tests, which it treats as only one tragedy in a longer story of dispossession and survival.

Behrendt follows Jeremy LeBois, the charismatic chair of the Maralinga Tjarutja Trust. First seen in his truck, driving through open desert at dawn and rhapsodising about the peace he finds on Country, LeBois is a generous onscreen presence. He invites the cameras into his community, explains how the colonial project has affected them, and interviews both other Elders and the white historians and lawyers whose testimony affirms the stories of the Maralinga Tjarutja.

‘It’s up to us to tell the story – the real story – of what happened here, because we live with it,’ he says. Along with his narration and Behrendt’s lightly observational footage, this story unfurls through animated artwork created by local painters.

Maralinga Tjarutja is full of hope and resilience. It’s the proud story of how this community has fought for their Country.

Long before the nuclear tests, it was the railway line across the Nullarbor that divided this country. Not only did it bisect the land, disrupting traditional ceremonial relationships, but it also brought white men, who in turn brought alcohol and sexual violence into the community. The steam engines also required water, and the precious soaks that had sustained this desert community were soon depleted.

Despite this, the community at Ooldea was still a happy place for many people – but its missionary managers were planning to close it down because the water was close to being exhausted, and sand dunes were beginning to claim the mission. Everyone was moved south to Yalata in 1952. Now, we associate this sudden dislocation with the atomic tests. But at the time the tests were kept secret… which is what makes the Maralinga Tjarutja people’s continued attempts to live on Country so poignant.

It’s because the documentary focuses on the Maralinga Tjarutja people’s relationship to this place that we understand why its loss was so devastating, and the effects of radioactivity so appalling. We see how witchetty grubs are harvested using digging sticks, and baked – along with damper – in sand ovens buried beside the fire. We hear how this same red desert sand was such a warm bed at night that you didn’t even need a blanket.

Then we hear the difference between the warm red sand at Ooldea and the cold grey sand at Yalata. Why wouldn’t you want to go back home? Then we see how the nuclear tests melted this same sand to glass, creating blast craters in which, unwittingly, some Maralinga Tjarutja people camped for the night. We see how people breathed in and ate radioactive dust along with their food, and died early of radiation-linked cancers and heart and lung diseases – but no health warnings were ever issued.

Still, Maralinga Tjarutja also gently but provocatively reminds the viewer of a colonial legacy just as toxic and persistent as nuclear contamination: the way that severing ties between people and their Country forces later generations to embark upon journeys home through white bureaucracies and archives, searching for the cultural knowledge that was stolen. No wonder the mystery and the road have been such powerful tropes in Aboriginal storytelling – case in point, Mystery Road.

Behrendt could have produced something angry, about loss – and there are some shameful moments, as when Jeremy LeBois and Mima Smart visit the South Australian Museum. They stroll among the looted tools and artworks displayed behind glass, and identify relatives in the archival photos. How many people’s family heirlooms and photo albums are locked away in such places?

It reminded me of the segment in Warwick Thornton’s ghost-story anthology The Darkside in which academic Romaine Moreton encounters an unsettled ghost at the National Film and Sound Archives in Canberra, formerly the Australian Institute of Anatomy where stolen Indigenous remains were studied and stored.

But Maralinga Tjarutja is full of hope and resilience. It’s the proud story of how this community has fought for their Country. In 2009, the Maralinga Village and test sites were handed back to their sovereign custodians, who secured compensation, signage and fencing of the test area rather than see it bulldozed to remove radioactive material.

In the documentary’s final moments, LeBois visits the Oak Valley Community cemetery, where those who led some of this vital work are finally buried on the land where they belong. As dusk falls over the desert, Behrendt movingly emphasises the intergenerational transfer of care for Country: the Maralinga Tjarutja are rebuilding their traditional communities, tending them with traditional burning practices, documenting them with art and storytelling, and preserving them for a future, not a half-life.