TV Review: Glitch season 3 really will be the end

Inspired by a trash voodoo myth, Glitch gives the Undead an unnerving Australian edge even as it keeps the secret of its finale.
Anthony Morris
[This is archived content and may not display in the originally intended format.] 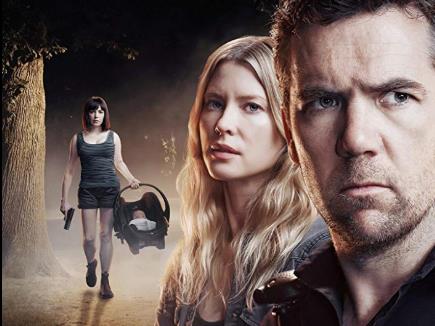 Glitch: reviving a genre with a girl, a baby and a gun. Image via IMDB

What if someone you loved came back from the dead and they were just… normal? That’s the premise behind ABC series Glitch, where the small Victorian country town of Yoorana now seems to have a graveyard with a revolving door. Created by Tony Ayres and Louise Fox, it’s a series about the walking dead where the horror isn’t about getting chomped by a zombie, but how to find your way back into your life when everyone you know has moved on – and how others cope with the return of a past they thought was dead.

The first series largely centred on exploring the uncanny creepiness of the concept of ‘The Risen’ as they and their loved ones struggled to deal with their unnatural situation; the second dug deeper into the machinations of Noregard Pharmaceuticals, the sinister company that seemed a little too aware of what’s really going on. Now with the third and final season, the mysterious boundary that stopped the Risen from leaving Yoorana has vanished, and they’re splitting up and hitting the road.

The town’s graves haven’t yet given up all their secrets though, and two fresh Risen are clawing their way to the surface: a former Chinese opera singer named Chi (Harry Tseng) who came to Yoorana in search of gold (and to run from his past) in the 1850s, and Belle (Jess Faulkner), the 15-year-old daughter of an Evangelical Christian family. Both their deaths are mysteries the series takes its time teasing out; meanwhile, former Yoorana Senior Constable James Haynes (Patrick Brammall) is down in Tasmania coping (badly) with the (second) death of his wife – until a strange accident in a restaurant bathroom has him seeing his situation with fresh eyes…

These final six episodes initially have more of an anthology feel to them, with each instalment focusing on only some of the scattered cast. Risen Kate (Emma Booth) barely gets a look in until the second episode, as her road trip to Adelaide with Owen (Luke Arnold) takes a dark turn. Likewise, Rodger Corser’s William doesn’t make his real appearance until episode two, where a vision involving the Melbourne Eye has him heading south only to discover – via a chance encounter with physicist Millie (Anna McGahan) – that what’s going on is a lot bigger than he first suspected, and that all the Risen have a part to play in what’s to come.

Director Emma Freeman gives the series an unsettling feel even during the most mundane of modern-day moments, while the flashbacks to Chi’s past are surprisingly convincing (the series was filmed in and around Castlemaine, which has plenty of Gold Rush-era heritage). This has always been a series more about mood than most Australian dramas, and while much of the initial angst around the original Risen has faded this still manages to constantly evoke a world where things aren’t quite right.

Much of that is thanks to the setting. Glitch has had strong international appeal (the series was picked up after its first season by Netflix, which then became an investor), and it’s a great example of the way Australian locations can enliven a genre story. The bushland around Yoorana is repeatedly shown as an uncanny, haunted space, even to viewers familiar with the bush; to overseas viewers, it can only add to the ominous, alienated feeling that runs through this series.

It’s no surprise then that the story of the Risen finally comes to a head during a bushfire. Zombies may have become a universal monster in Western culture since George Romero’s Night of the Living Dead added peak grisly and inspired every permutation multiple times over (even Glitch was initially compared to similar French series The Returned), but the series’ small town normality breaks free of the pop-cult cliches of re-animation. Instead it repeatedly makes skilful use of its uniquely Australian setting to create an unnerving backdrop for its disconnected characters to struggle against.

This definitely isn’t the place to start if you’re new to Glitch. The pace isn’t exactly break-neck at first, and the stakes remain blurry for the initial few episodes. Part of that’s intentional – these living dead may not be zombies, but horror is still part of this series DNA – but it does mean newcomers will find themselves dropped in at the deep end. Fortunately, seasons one and two are currently up on iview; these are some zombies worth catching up with.