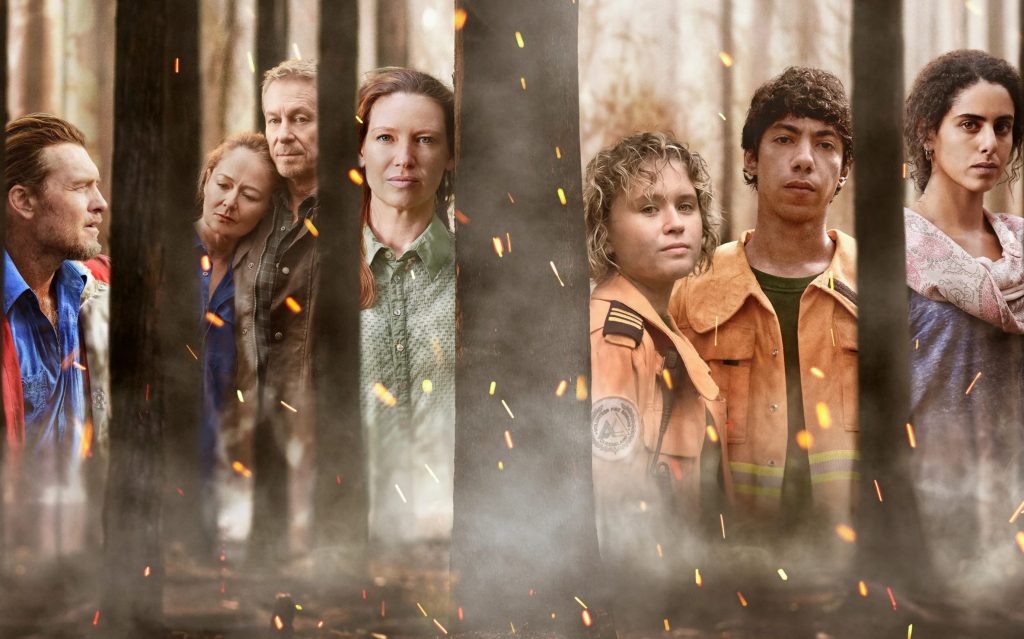 The cast of Fires. Image: ABC

Every bushfire season feels like the worst… until the next one. You might recall the Ash Wednesday fires of 1980 and 1983, the 2003 Canberra fires, the 2006 Victorian Alpine fires, or 2009’s Black Saturday. Indeed, since European colonisation disrupted old land management practices, and drought has intensified, pretty much every day of the week has acquired a namesake blaze in Australia – Black Thursday in 1851, Friday in 1939, Sunday in 1926 and Tuesday in 1967.

And then there was Black Summer, which is dramatised in the ABC’s new six-part anthology series Fires. Co-created by Tony Ayres and Belinda Chayko, the series begins in September 2019 and ends in February 2020, when we thought the worst was over. Each episode is set in a different location in eastern Australia, loosely linked by the recurring presence of young volunteer firefighters Tash Jasic (Eliza Scanlen) and Mott Mills (Hunter Page-Lochard).
Episode one, written by Chayko and directed by Michael Rymer, sensitively explores the unacknowledged mutual attraction between Tash and Mott, who live in a coastal Queensland town.

Easygoing Mott, an inexperienced firefighter, gets teased about Tash by his aunties (Shareena Clanton and Leila Gurruwiwi), while brigade leader Yvonne (Helen Thomson) gently encourages him. At 21, Tash already has five years of firefighting experience. She likes Mott back, but resents the unwanted burden of caring for her dad (Russell Dykstra) and bratty teen sister Tahlia (Josephine Blazier) after her mum’s suicide. She’s angry and distracted as she and Mott face their first inferno together. You might say it’s a baptism of…

Look, I’m not even sorry.

Episode two of Fires, written by Jacquelin Perske and directed by Ana Kokkinos, is an absolute stunner. It’s now November 2019 in NSW, and stoic Kath and Duncan Simpson (Miranda Otto and Richard Roxburgh) return to their dairy farm after fire tears through their valley, only to find their farmhouse destroyed and half their cattle needing to be euthanised.

The nearby house where their adult son Lachie (Benjamin Doree) lives with his ditsy city-born fiancée Brooke (Taylor Ferguson) is completely unscathed, however. So is the property of the Simpsons’ neighbours and friends Vince (Steve Bastoni) and Jane Rocca (Renee Lim). But Lachie is missing, and a TV journo named Nick (Bernard Curry) is in town, spreading gossip about arson and sniffing about for tragic yarns: ‘Kath and Duncan have had a bit of a shock, so they might not be themselves tonight,’ Vince explains gently to his young kids. Subtly scripted and beautifully directed, with gut-wrenching performances by Otto and Roxburgh, the episode is a stunning exploration of grief as Kath, Brooke and Duncan lash out, all looking for someone to blame. It ends on a hopeful, conciliatory note, gilded in late-afternoon sunlight.

Read: Behind the sustainable production of ABC drama ‘Fires’

While only the first two episodes of Fires were available in preview, there’s much more to look forward to. Episode three picks up in December 2019 on the NSW south coast, as Mott and Tash fail to convince treechanger Lally (Anna Torv) to evacuate. Meanwhile, recovering drug addict Joel (Mark Leonard Winter) leads the holidaying Biswas family on a risky route out of town. On Christmas Eve in episode four, local black sheep Mish (Charlotte Best) must
team up with her despised former music teacher, Glen (Sam Worthington), to bring seasonal cheer to evacuees who’ve lost everything. In episode five, a ‘megafire’ bears down on Ruth (Kate Box) and Nawra (Helana Sawires) as they defend their animal sanctuary in late December, while incident-control radio operator Kip (Daniel Henshaw) struggles to find help for everyone.

The finale takes place on New Year’s Eve under an uncanny blood-red sky, in a beach town much like Mallacoota. Reclusive Doug (Sullivan Stapleton) decides to help Adut (Ameshol Ajang), a young South Sudanese girl separated from her parents. And as fire forces everyone to the beach, community radio announcer Caris (Noni Hazelhurst) is their last voice of calm and reason.

While journalism and documentary film have previously revealed the impact of bushfire, Fires’ anthology drama approach makes for gripping, character-driven television. Its protagonists are not just ‘dramatic re-enactment’ action figures manipulated to explain events. They feel like real people who’ve already faced loss, disappointment or dislocation, and whose hope, desire, antipathy, selfishness and generosity the series treats as seriously as the fires themselves.

Fires is so vividly handled, both in scenes of fire fronts and their aftermath, that it might well throw viewers back into the heavy feelings and heightened anxiety that so many of us felt during 2019–20. Maybe we’ve felt so heavy and anxious since then that this will truly seem like period drama. But Fires might also serve to remind us now of the best qualities Australians possess, and the ways in which we help and protect one another.