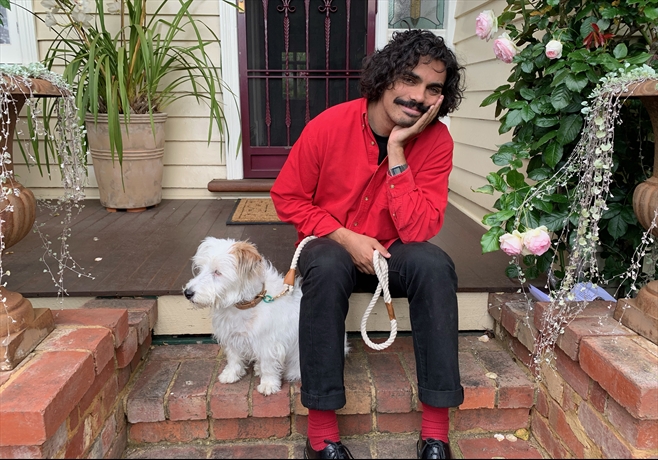 Tony Armstrong used to be an AFL footballer; but these days the moustachioed Arrabinya man from NSW is an ABC News Breakfast sports journalist and commentator, with a cult reputation as everyone’s wholesome crush.

Last year he went viral for a news blooper about cricketer Tim Kaine, and he has good-naturedly lampooned his heartthrob status in a segment for The Weekly called ‘Tony’s Terrible News’.

Look, it should probably be called A Dog’s World with Not Much of Tony Armstrong. He doesn’t play a major onscreen role in this three-part documentary series, and nor does it focus on his own life with dogs. (RIP to Tony’s beloved black labrador, Junior.)

When he appears, he’s always wearing the same outfit – red shirt over black T-shirt, black jeans, and matching red socks peeking out above his Doc Martens – but he hangs out with a different dog every episode. It feels like WildBear Entertainment just got him for one day and took him to various outdoor locations with various dogs.

That said, his genial voiceover is enjoyable – and relatable. Armstrong sounds youthful, and doesn’t have one of those trained ‘ABC broadcaster voices’, which is a key part of his appeal. He’s equally at home on the mic while dropping scientific terminology or selling lines like, ‘Another key factor is their vibe, or personality’.

But even without him onscreen, A Dog’s World is a fun, low-stakes watch. It’s interested in all dogs, from pampered pets to wild packs, working and service animals; and it paints a carefully cosmopolitan, trans-cultural picture of dogs’ relationship to humans.

The series explores the latest insights from canine researchers, whose challenge is to disentangle the physiological, genetic and psychological aspects of how dogs experience the world. Scientists from around the world appear on camera, explaining what they’ve learned.

I particularly enjoyed the experimental footage that shows how scientists get their data from their research subjects. Dogs leap up into MRI machines where they’ve been trained to lie perfectly still. They locate misplaced possessions, open doors and fridges, navigate obstacle courses, effortlessly negotiate experimental apparatus, and detect minute molecules of scent.

I felt a rising sense of tenderness to see how the dogs love every moment, and soak up praise from their scientist handlers. (This was what I also loved about ABC’s recent Muster Dogs.) A highlight was Maya, a former shelter dog who was thought ‘un-adoptable’ until she was trained to become Australia’s first koala scat detection dog. Now she can identify 30% more koala habitat than humans can.

Other experiments examine the bond between dogs and their owners. A new scientific approach called ‘dogmanship’ focuses on the human behaviour that affects how dogs behave. In one test, dogs’ and owners’ heart rates are monitored, and a burly bearded dog owner starts to cry when he’s shown how his heartbeat and his dog’s begin to synchronise when they’re reunited.

I liked how the series debunks myths: that dogs can only see in black and white; that their tails only wag when they’re happy; that you can’t teach an old dog new tricks; or that they need the security of a dominant ‘alpha’.

Episode one focuses on how dogs differ from wolves, and how they learned to exploit human environments, and human caring instincts, for their own survival. As wild dogs, dingoes offer an intriguing insight into the early stages of dogs’ domestication. And as observational research on wild wolves – as opposed to captive wolves – now reveals, wolf packs are more like families than hierarchies; so dogs thrive when they feel loved and accepted.

Episode two – which I liked most – focuses on dogs’ sensory world. Dogs have scent organs, and scent processing abilities, that humans simply lack. Their visual acuity is worse than ours, but they can see into the ultraviolet spectrum, are better at detecting heat and motion, and can even perceive the earth’s magnetic field in a way that gives them a natural compass, like migratory birds.

As dog owners already know, dogs are individuals with unique personalities – influenced by breed, but also by socialisation. To help them learn, ‘fun is the X-factor’ – and they’re powerfully affected by humans’ emotions and personalities. When a human is crying or upset, dogs will instinctively go to comfort them – even if that person isn’t their owner.

Visually, the series tries a bit of everything: animated sequences to show anatomy and processes; and corny visual metaphors, such as a brooding figure in a black hoodie and cargo shorts that represents ‘depression’. I actually laughed aloud at another zany sequence: a dog sits in front of a silver food cloche that is removed to reveal either a juicy rack of lamb (a reward!) or, as ‘punishment’ … a live cat, accompanied by Foley, hisses and snarls.

Episode three is more structured than the previous episodes, as dog behaviourist and sniffer dog trainer Ryan Tate gives two weeks of training to three ordinary Australians and their dogs. The results are pretty impressive.

There’s also a lot of great footage of dogs! Dogs of all shapes and sizes, in parks and backyards, on streets or beaches. Dogs demonstrating their signature behaviours in close-up and slow motion. Dogs bonding with humans, socialising with other dogs, and loving life. Honestly, I could have watched hours of this stuff. I frequently caught a goofy grin spreading across my face.

Whether you’re a curious dog owner or just want a soothing TV treat, A Dog’s World is a charming exercise in empathy for these creatures, whose cognitive, sensory and emotional world turns out to be unexpectedly rich and complex.

A Dog’s World with Tony Armstrong

A Dog’s World with Tony Armstrong is on ABC TV on Tuesdays at 8:30pm; all episodes are streaming on ABC iview