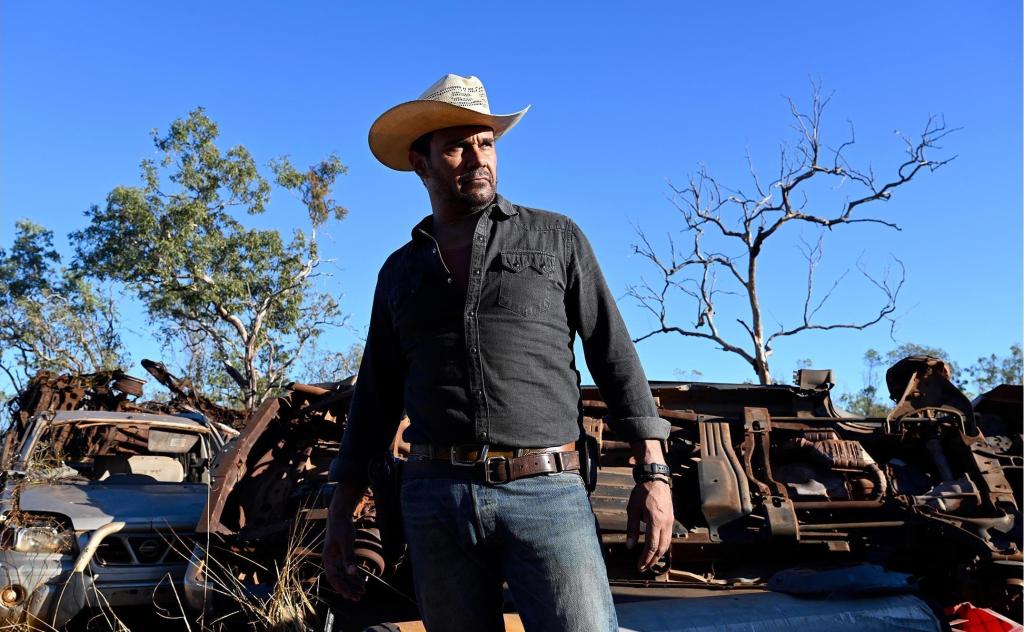 On television, Australia’s crime fighters rarely carry a badge. The ABC’s recent run of murder mystery hits has starred medical examiners and flapper adventurers, while Nine’s Underbelly series and its spin-offs have taken aim at the wrong side of the law. With his gunbelt and cowboy hat, Mystery Road’s stoic Detective Jay Swan (Aaron Pedersen) is deliberately retro as he roams Australia’s wild north, a law unto himself as he hunts down a man who did him wrong. Okay, he’s actually after the head of a drug smuggling syndicate, but you get the idea.

The first episode of the current series began with a headless body found in a swamp. It ended with the discovery of a sinister bag and young cop Fran (Jada Alberts) knocked out on her own veranda. This week’s episode answers two of those questions, but the mystery of who’s responsible for the headless corpse only deepens.

Pills similar to the ones found shoved down the corpse’s neck seem to be all over town, as does the influence of shady pearl farmer and former special forces solider Alkemi (Gary Sweet). And while Sandra Elmquist (Sofia Helin) has enough trouble with the locals over her archaeological dig without going to the cops with the bag she uncovered, there’s only so long she can keep it under wraps.

Directed by Warwick Thornton (Samson and Delilah, Sweet Country) and Wayne Blair (The Sapphires, Cleverman) and with plenty of Indigenous talent in front and behind the cameras, Mystery Road foregrounds issues of heritage in a refreshingly matter-of-fact fashion. Jay himself is explicitly positioned between two cultures, a cop distrusted by both sides. Sandra’s eagerness to uncover the past feels exploitative, yet the series doesn’t come down hard on the side of those protesting against her either. It’s not only the whites in the town of Gideon who are lost and desperate, but overwhelmingly they’re the ones who seem trapped, washed up in a place that grinds them down.

The other culture that looms large here is an international one. Mystery Road is clearly part of a global market for crime drama, and not just because Helin (star of Nordic Noir hit The Bridge) is part of the cast. This is a series where a damaged cop with a dark past arrives in a small settlement rocked by a recent brutal death. Is the killing simply a random murder, or does it have deeper links to a darkness that runs throughout the town? If that sounds like it could be the synopsis of any number of international crime dramas, it’s totally intentional.

Mystery Road works best when these genre conventions sync up with reality. Dramatic convention requires a web of connections between the characters to heighten the stakes. Of course law-breaking activist Leonie (Ngaire Pigram) is Fran’s sister. Jay walks around a corner and whoops, there’s his ex-wife Mary (Tasma Walton) flirting with Simon (Callan Mulvey), an ex-cop who seems keen to give Jay a hand.

But this also adds to the sense of a vast, underpopulated land, where there are countless shots of the vast sweeping landscape but everybody knows each other because there’s only a handful of people to be found. The crime story is compelling and Pedersen is a charismatic lead, but it’s the sense of place that lingers, of wide empty spaces and haunted, desperate characters clinging to a landscape they’ll never understand.