Taika Waititi directs Thor’s third dedicated feature — and his addition to the fold couldn’t be more assured or entertaining.
Sarah Ward
[This is archived content and may not display in the originally intended format.] 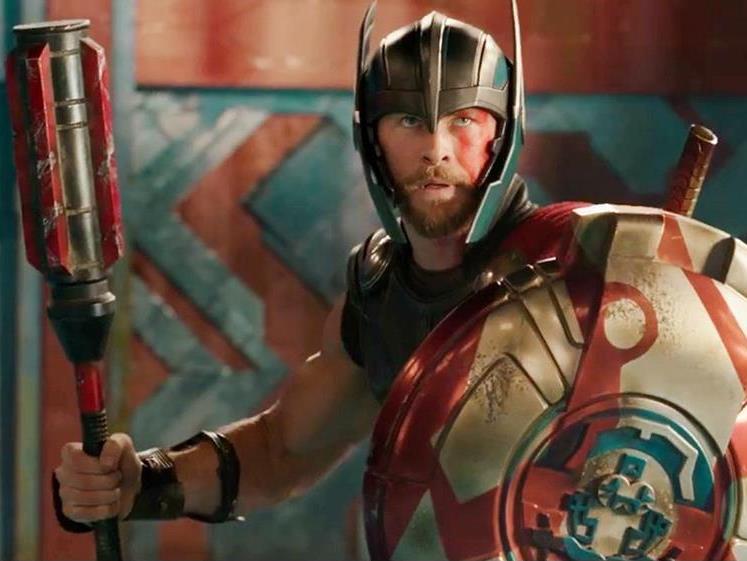 Amongst the Avengers, Thor has always stood out from the crime-fighting crowd. A literal god among technologically and scientifically enhanced men, the mythology-inspired character has wielded the hammer on behalf of the Marvel Cinematic Universe’s goofier, looser, more amusing tendencies — and proven his skills in the offbeat superhero arena in the process. 2011’s Thor is a little silly, and rather funny, as a result. 2013’s sequel Thor: The Dark World as well. Embracing the outlandishness that accompanies not only donning a cape and costume, but zooming down to earth to save the day on a recurrent basis, is as much a part of the figure’s filmic arsenal as his beloved Mjölnir.

While two Guardians of the Galaxy films and one Ant-Man effort have ridden the same wave of comic energy since Thor’s first screen stints, Thor: Ragnarok happily, hilariously and jubilantly follows in its own franchise-within-a-franchise’s footsteps. Enlisting director Taika Waititi, the series’ third instalment comes with an amplified sense of humour to match its gleefully ‘70s and ‘80s space opera vibe — think tongue-in-cheek narration as peppy as the feature’s bright colour scheme, pitch-perfect one-liners and a breezy comedic register oozing through its performances. It’s easy to imagine Thor, played with fun and flair by returning star Chris Hemsworth, arguing over bloody dishes with What We Do In the Shadows’ flatmates or calling someone a real bad egg, Hunt for the Wilderpeople-style, for example.

He doesn’t do either, but knowing that he wouldn’t feel out of place in Waititi’s back catalogue perfectly encapsulates Thor: Ragarok’s joys. Working with a script by Eric Pearson (Agent Carter), Craig Kyle (a seasoned Marvel scribe and producer) and Christopher Yost (Max Steel), the New Zealand filmmaker himself actually gets many of the movie’s best slabs of dialogue in the motion-captured role of Korg, an imprisoned protestor Thor befriends in the gladiator pits of the planet Sakaar — and once again, the fact that can even prove the case says much about the film’s approach.

In his sixth screen appearance, and the MCU’s 17th feature, Thor’s path to palling around with his new best buddy is just one of his eventful escapades. When he’s first seen on screen, he’s trapped, talking to a fiery demon that’s promising to tear his Asgardian home apart — a destructive outcome also known as Ragnarok — but still managing to maintain his good, kooky nature. Once he’s free, his troubles only amplify after Hela (Cate Blanchett, Song to Song), the Goddess of Death, comes calling on his home realm. Soon the God of Thunder is sans weapon, stuck on an alien world and enslaved into battling it out for the Grandmaster’s (Jeff Goldblum, Independence Day: Resurgence) amusement. Crossing paths with the Hulk (Mark Ruffalo, Now You See Me 2) in the ring, enlisting his treacherous brother Loki’s (Tom Hiddleston, Kong: Skull Island) help and making the acquaintance of the feisty, no-nonsense bounty hunter SR-142 (Tessa Thompson, TV’s Westworld), all form part of his journey.

Marvel’s movies have long adhered to a formula, and Thor: Ragnarok is no different in a narrative sense. The requisite plot and thematic beats are hit like the drums in Led Zeppelin’s well-deployed ‘Immigrant Song’, pondering the recognisable matters of responsibility, family and the fate of the universe, while the feature nods to its and Thor’s brethren in a necessary but never overpowering manner. There’s no plastering over what’s become a trusty winning template over the past decade, but there is plenty of exuberant personality here to make the familiar seem fresh. Tonally, Waititi’s addition to the fold couldn’t be more assured — or entertaining.

Indeed, settling in for yet another superhero flick isn’t the main appeal here; discovering the difference a light, cheeky, banter-filled, joke-laced, screwball-esque mood can make is, and the end result works like a charm. Thor: Ragnarok is an ode to embracing the glorious ridiculousness of caped crusaders, with the requisite visual polish and perhaps one-too-many impressively choreographed action scenes, and it’s a hammer throwing, fist-smashing good time.