Does Natalie Portman steal Chris Hemsworth's thunder in the latest outing for the Marvel superhero? It's complicated.
Anthony Morris 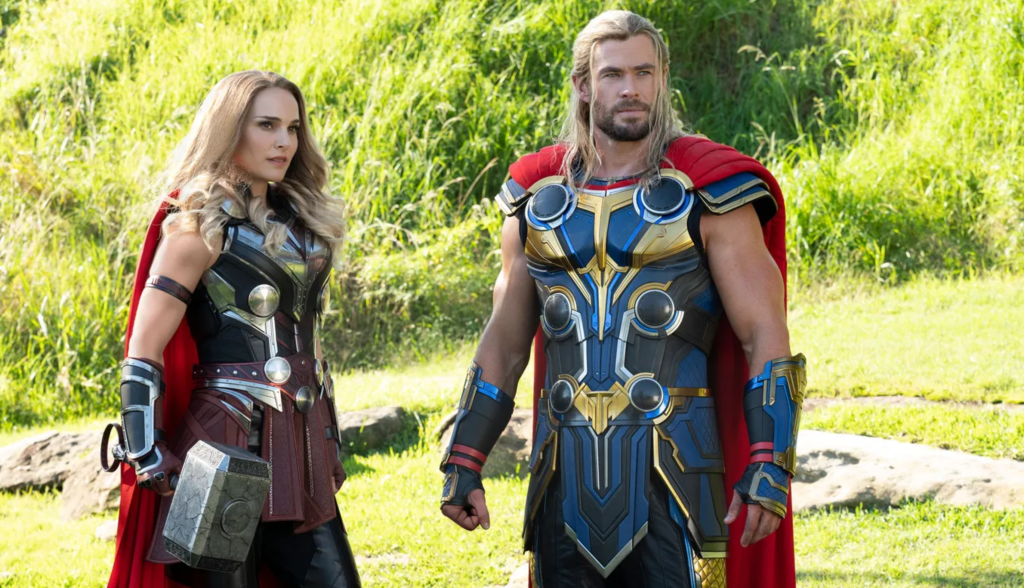 Is there such a thing as an essential Marvel movie? Even the most die-hard fans admit that in the Marvel Cinematic Universe (MCU), some films matter more than others. It’s what props up the series as a whole: even if an individual movie might struggle, it’s still part of a wider picture – and that’s what counts.

For good or ill, Thor: Love and Thunder doesn’t have that support to fall back on. Thor himself (Chris Hemsworth) is an aimless drifter, both as a character (at least at first) and within a MCU that’s moved on. His latest adventure doesn’t really tie into any wider story; recent MCU television series have been more important to the overall scheme than this.

What’s left feels more like a traditional sequel. Audiences rightly loved Māori writer-director Taika Waititi’s 2017 Thor: Ragnarok, so here’s more of the same (minus Loki and the Hulk). You can’t really go far wrong with Hemsworth’s dorky hot guy charisma, or Waititi’s offbeat sense of humour – but you can come away thinking you’ve had enough for a while.

When we last saw Thor at the end of Avengers: Endgame, he was heading out to explore the galaxy with, well, The Guardians of the Galaxy. Like a lot of Marvel cliffhangers, the plot this sets up is fairly quickly ditched, as the need to centre his aimless self has him returning to Earth. There the menace of Gorr the God Butcher (Christian Bale) – his mission is in his name – threatens the Asgardian colony (slash amusement park) that’s established itself there in the wake of Asgard itself being destroyed.

The big twist with Thor’s return to Earth is that Earth already has a Thor on the job: Jane Foster (Natalie Portman), his ex, is now wielding his previously shattered magical hammer Mjolnir. Is there a running joke about how Thor still has feelings for his old hammer? Sure, why not.

If there’s one thing this film isn’t short on, it’s running jokes, including one involving a pair of magical goats who scream pretty much at random. For a film that’s also about a genocidal maniac pledged on destruction to avenge the tragic death of his daughter and features a main character dying of cancer, that’s a lot of tonal ground to cover.

In the past this kind of clash has powered Waititi’s strongest work (Boy, Hunt for the Wilderpeople). This time out he seems to struggle to get the balance right. Thor: Ragnarok might have been saddled with a lot of heavy baggage that didn’t suit his lightweight style – it was literally called ‘Ragnarok’ – but it meant he had to weave his own approach in between a standard Marvel framework.

Read: Doctor Strange in the Multiverse of Madness review

Here he’s given more of a free hand, and deservedly so. But there’s little dramatic weight to the story he’s telling. For stretches this is a super-powered rom-com between Thor and Jane, which is charming but needed more space in the film to really work. Fortunately Portman is fun as a Thor who can’t quite land a catchphrase, and there’s enough chemistry between her and Hemsworth to make their scenes pop.

There’s a lot going on here. Especially early on when the plot is creaking into gear, the comedy can seem a little indulgent. If you liked the cheezy Asgardian play from the last film, there’s good news and bad news, and the bad news is that some jokes aren’t funnier the second time around.

Back at the story, Thor and Jane (AKA The Mighty Thor) soon team up with King Valkyrie (Tessa Thompson) and along with Thor’s buddy, rock monster Korg (voiced by Waititi) they head into space to stop Gorr’s evil scheme to kill the gods once and for all (he’s also kidnapped the Asgardian children, because he’s evil).

The highlight of their space road trip is a stop off at the main hangout of the Gods to ask for help from Zeus (Russell Crowe). It’s a ridiculous scene in a film that’s not short of silly moments, but Crowe gives his bombastic character exactly the over-the-top energy he, and the film, needs.

Likewise Bale, whose increasingly grim and intense character is the polar opposite of pretty much everyone else in the film, works hard to provide this with some much-needed heft. Thor: Love and Thunder is a film that gets better as it goes along; considering their all-action climaxes are usually the weakest part of most MCU movies, that’s an impressive achievement.

There’s plenty to enjoy, but this never quite shakes off that ‘we’re doing it again’ vibe. The garish fantasy visuals and brash 80s-era soundtrack have been done more than once in the MCU now; Hemsworth is a comedic delight but this leans into that so hard there’s not a lot else going on with his Thor. Just about everything here is something you’ve seen before. Luckily stepping down from a great film still leaves you with a pretty good one.