A film screening, a follow-up in-depth conversation and a masterclass make for much (remotely experienced) fun.
Liza Dezfouli 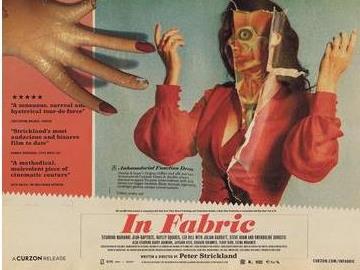 Auteur Peter Strickland’s work includes Katalin Varga, Duke of Burgundy, and Berberian Sound Studio. In Fabric (2018) is a fashion meets horror comedy about a scarlet demon dress embroidered on an inside seam with the words Those Who Wear Me, Will Know Me in Latin. You don’t want to wear this dress, really.

In Fabric is one of the weirdest films I’ve ever seen. The time setting and aesthetics slide across decades, from the late 19th century through to the 70s, and stopping somewhere in the 90s. The narrative constantly interrupts itself with distorted interventions: TV ads for department store sales, static, relentless sound bursts, nightmares where you aren’t sure whether the character is dreaming or not, montages of the limbs of mannequins, high street store catalogues being chopped up, and birdseye views of Dickensian scenes of shoppers.

In short: Sheila (Marianne Jean-Baptiste) isn’t having the best time of it. Her husband’s left her, her brattish son Vince (Jaygann Ayeh) and his awful girlfriend (Gwendoline Christie) are getting on her nerves. She works at a bank, and is oppressed by a pair of nightmarishly concerned bosses Stash and Clive (Steve Oram and Julian Barrett). The relish Oram and Barrett bring to these scenes is a delight. There’s a lot to enjoy in the satire when it comes to the relentless stupidity of the middle management level of the menial workforce. In this respect, In Fabric reminded me of Brazil, Monty Python’s Terry Gilliam’s 1985 surreal sci-fi dystopian satire on bureaucracy.

Sheila has been answering lonely hearts ads and decides to shout herself a new dress to wear on a date. She visits a department store where she meets Miss Luckmoore (played by Strickland regular Fatma Mohamed), who comes out with things like ‘Your changing room is waiting for you and your dress to coalesce into a simple union of wonder.’Sheila buys a dress, an ambassadorial function dress in a colour called ‘artery’. Then things go really bad. A second victim of the dress is Reg (Leo Bill), who finds himself reluctantly made to don it on his stag night. Babs, Reg’s fiancée (Hayley Squires), also later falls victim to the dress’s evil designs (all puns intended).

At first, I thought the dress was Sheila’s own unconscious forces made manifest; she’s pretty controlling and uptight (this film doesn’t give you much to identify with in terms of characters), but no, the dress its own gloriously berserk nightmare.

In Fabric is two full hours of madness, and I think it could have done without the Gwen or Zach (played by muso Barry Adamson) characters without losing anything. In Fabric references the giallo genre of highly saturated intense stylish horror films made famous in the 70s, by Dario Argento, amongst others. It could also be compared in scope to Dan Gilroy’s 2109 Velvet Buzzsaw.  All in all, In Fabric is a most unforgettable ride.

Saturday evening’s follow up to the screening of In Fabric involved a live conversation between Melbourne film critic Alexandra Heller-Nicholas and director Peter Strickland. Audience members could submit questions in real time during the conversation, the pair discussed  horror and fashion, casting, location, and production, which laid strong groundwork for the following masterclass.

The masterclass opened with a question to everyone: ‘What are ya wearing?’ Participants had been invited to wear something red to honour the red dress of the film and to post photos of their choices on Instagram. Peter Strickland, joining the stream from Hungary, was in a blue shirt he bought in NYC during the peak of the 90s blue collar chic period. He didn’t currently own anything red, he said.

Adele Varcoe wore a camo patterned pink and orange onesie that came with a dating story. Jo Thompson was in a white shirt; she said she’d never wear red. Ricarda Bigolin wore a scarlet T-shirt top with a built-in necklace. There was talk about the meaning of clothes – along with the physical item comes context, history, its provenance. There was talk about the symbolic, cultural and historical meanings of the colour red. Isadora Duncan’s fatal scarf was made of red silk. The prevalence of red in film, as a motif, as a symbol, was emphasised, especially when it came to the Gialli genre of film, films by Dario Argento in particular.

‘I wanted to explore how haunted clothing is. This shirt – it isn’t just a shirt itself; it’s an association. If someone you love dies, you never get rid of their shirt.’

The relationship between fashion and satire was discussed, the film Blood and Black Lace by Mario Brava, a film set in fashion houses, was mentioned in this context, as well as reference to the colour saturation this film employed. The work of Kenneth Anger was mentioned, in particular the intense ‘visceral’ depiction of the flapper dresses in his 1949 film Puce Moment.

Peter talked about pop culture, about how he has used existing consumerist imagery, particularly in his second film, Berberian Sound Studio. He mentioned the heightened atmosphere of department stores such as Jackson’s in Reading: ‘flamboyant and theatrical.’ He talked about the childhood perspective of being taken to department stores, of the mystery of things like dumb waiters and suspender belts. He remembered the hushed voices and the sound of the thin paper pages of store catalogues being turned over, both of which figure in In Fabric.

Peter talked about his ideas for In Fabric. ‘I wanted to explore how haunted clothing is. This shirt – it isn’t the shirt itself; it’s the association. If someone you love dies, you never get rid of their shirt. Fetishism is being turned on by someone’s clothing. Sheila is disgusted by Gwen’s lingerie; she can’t pick it up. Reg has a stocking fetish, slightly embarrassing; Babs is a prisoner of her perception of her body.  They’re plagued by obsessions. You put something on, you escape reality. I was worried that it would be seen as a consumerism critique, the commodification of desire. It’s a delicate balance. The characters are punished, but the dress is random, it’s not an avenging angel. The first draft felt too didactic – I can’t pull that off, that’s for Ken Loach. It’s a good point to start a conversation but I didn’t want to ram it down people’s throats.’

Peter said he used to have nightmares about mannequins as a child. “Their hands were splayed out, long thin fingers … I wanted a film where the staff looked like mannequins, and the mannequins bleed like humans.”

Costume designer Jo Thompson, who worked on Little Birds and This is England, talked about the process of developing the costumes. ‘It was an organic process. The film involves so many looks.’ Originally Peter had conceived of the dress as being white: ‘I thought that would get lost in the film,” Jo said. “Arterial red was the best way to go.’ The dress came about as a collaboration between Jo and the cutter to create the best shape for the special effects. ‘There’s 10 meters of fabric, with the lining. Pragmatic decisions had to be made about it. It needed to be a camera- friendly dress. We looked at 1920s dresses, at Victorian dresses. Peter was involved in every decision. Every element was given enormous consideration and time.’

Jo also talked about the differences between designing for fashion and designing for film. Costume design is a collaborative process, she said, with the script and the director’s vision at the forefront. The embroidered motif on the dress aroused curiosity. That design was inspired in part by the shape of the eye in peacock feathers and the flower paintings of Georgia O’Keefe.

It was a lot of fun getting to unpack the fashion element of this luscious film in this way. Personally, I’d have been happy to sacrifice the video clips and references supplied by the Melbourne end to hear more from Peter Strickland and Jo Thompson – the conversation with Jo came quite late in the day and it would have been good to hear her to go into more detail about the looks in the film.

The screening and the two follow up events, the Conversation on Saturday evening and the Masterclass on Monday, made for a thoroughly enjoyable experience. The dynamic engagement between the panel and participants was a pleasure and there was so much learning to take away. Full marks to the RMIT team for creating such an instant and powerful sense of community; people in the chat were even exchanging contact details by the end of it. I hope RMIT Capitol does more of this sort of thing; there’s hunger in us to share and consume film in a connected context like this. Someone suggested the possibility of establishing Rocky Horror dress up type cult screenings of In Fabric. Fingers crossed.