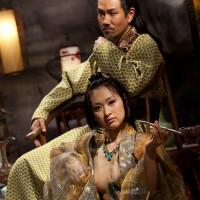 The Sex and Zen franchise, begun in 1991, is mostly daft soft-core erotica – so soft it’s almost flaccid – given whatever worth it has by its humour. Sex and Zen: Extreme Ecstasy, aka 3D Sex and Zen, is the first film with the name in over ten years, and the first to utilise 3D; hopefully it’s the last.

Yangsheng (Hiro Hiyama) is an obnoxiously selfish Ming Dynasty undergrad, more interested in sex than his studies. Either a virgin or a douchebag, he only seems to learn of his premature ejaculation problem after marrying Yuxiang (Lan Yan), with whom he had a whirlwind two-minute romance.

To rectify things, he seeks out the local Prince of Ning (the aptly named Tony Ho), a collector of rarities whose Pavilion of Ultimate Bliss is essentially a harem of freakshow nymphomaniacs/sex slaves. One of these nymphos, Ruizhu (Saori Hara), is reputedly able to cure men of whatever ails ‘em, sexually. But before Yangsheng can do her, he has to agree to serve the Prince for ten years. He does; he does Ruizhu, learns he has a lap pinkie and divorces his wife. Not necessarily in that order.

After meeting the hermaphrodite Elder of Bliss, whose metre-long penis can lift wagon wheels, Yangsheng trades his valet to learn the Elder’s sex secrets, but first he needs to swap cocks with a donkey. So far so silly. But from here, the film inexplicably descends into a mire of cartoonish rape (of both men and women), torture, torture-porn, sadism, violence and marital arts, before concluding with a touching moral about how love is better than sex.

As with its predecessors, the film’s a panto, really. Our hero gets a donkey cock and suddenly he can do 10 women at once! Well sure, this is some kind of soft-porn Human Centipede! The acting is atrocious, the dialogue terrible (well, in translation at any rate), the story ludicrous – not that these things are why you watch. Gorgeous costumes, though. And despite it being a near two-hour acid trip of a film, the humour gives way to boredom pretty quickly. Furthermore, there’s an unhinged nastiness here, tinged with misogyny (arguably representative of the era it’s set in) and homophobia. It’s hard to get past.

Should you even want to, be warned: the subtitles run too fast, making it difficult to follow the story (again, should you want to) without endlessly pausing the DVD, and the 3D is missing – unless you have a 3D TV presumably? But I’d count that as a blessing, despite EP Stephen Shiu’s claim in the extras that “not watching this film in a theatre would be a miss”. Were you to mix the general quality of 3D with the general quality of this flick, I think you’d create a noxious substance with the potential to damage your brain cells.

Rating: 2 stars (mostly for the costumes)

Out now on DVD and blu-ray
Distributor: Madman
Rated R 18+

Melanie Sheridan is a Melbourne-based reviewer for ArtsHub. Formerly the Arts Editor at Beat magazine and currently the co-editor of the newsletter of the Society of Editors (Victoria), she tweets inanities under the name @mellygoround.