Playwright turned filmmaker Martin McDonagh's latest feature sees a hapless playwright embroiled in a plot involving gangsters, vendettas – and dognapping.
Sarah Ward
[This is archived content and may not display in the originally intended format.] 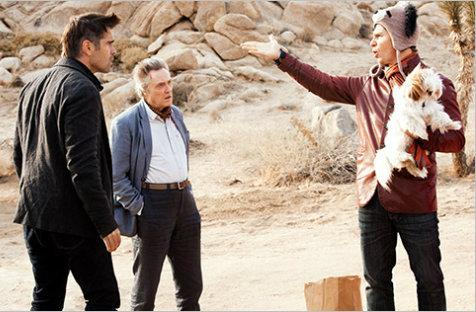 Martin McDonagh’s latest feature, the long-awaited follow up to his acclaimed crime-comedy debut, In Bruges, sees the the Irish writer/director once again exploring the world of unstable outlaws and their unseemly acts – with a notable addition. In Seven Psychopaths, McDonagh also turns his attentions to his own profession.

His protagonist – and potential screen surrogate, given his name – is Marty (Colin Farrell, Total Recall), a struggling screenwriter whose search for fictional inspiration soon has factual consequences. Marty is working on a new screenplay, but all he has is the title: Seven Psychopaths. Consequently, he’s seeking real-life psychos to interview, to help kick-start the creative process. A classified advertisement placed by his best friend Billy (Sam Rockwell, Cowboys & Aliens) sends the violently-inclined to his door (musician Tom Waits among them), just as a seemingly random dog-napping scam orchestrated by the pacifist Hans (Christopher Walken, Dark Horse) turns troublesome after toying with the wrong target, the sadistic gangster Charlie Costello (Woody Harrelson, Rampart).

As Marty becomes embroiled in the resulting mayhem – altercations with his Australian girlfriend (Abbie Cornish, W.E.), gunfights with gangsters (Zeljko Ivanek, Argo) and terrifying tales of vengeance and vendettas (featuring Harry Dean Stanton, This Must Be the Place) included – Seven Psychopaths probes as well as parodies the events that comprise its plot. Wearing its sense of humour on its sleeve from the outset, the film twists its genre components into a clever concoction that complies with and casts new light on the underlying concept, with generally entertaining results.

McDonagh’s writing is masterful, thankfully so for a film predicated upon skewering a screenplay within a screenplay. His dialogue snaps and crackles with energy, never more so than when recognising its self-referential status, and his handling of criminal tropes proves accurate and amusing. Not all jokes hit their marks, nor does every interlude earn its place in the narrative; the scattershot execution sometimes detracts from the smart script, as does the stylish but all-too-standard direction, but Seven Psychopaths certainly has fun with its endeavours. However, it is the cast that emerges as the film’s strongest element, a far from surprising feat given the talent involved.

Rockwell and Walken steal every scene they’re in, perfecting the film’s dark comedy and biting satire, whilst Farrell makes for an amiable leading man, playing it the straightest of the performers. Each makes the best of the material, even when the film itself wavers.

Although Seven Psychopaths may never fully reach the Tarantino-esque thrills and laughs aimed for, it remains a competent imitation. 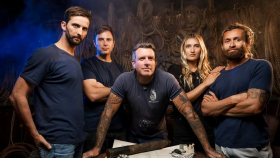