Review: Soderbergh’s High Flying Bird has skin in the game

This Netflix feature shot on iPhone and set in the world of American basketball may baffle or intrigue.
Adrian Martin
[This is archived content and may not display in the originally intended format.] 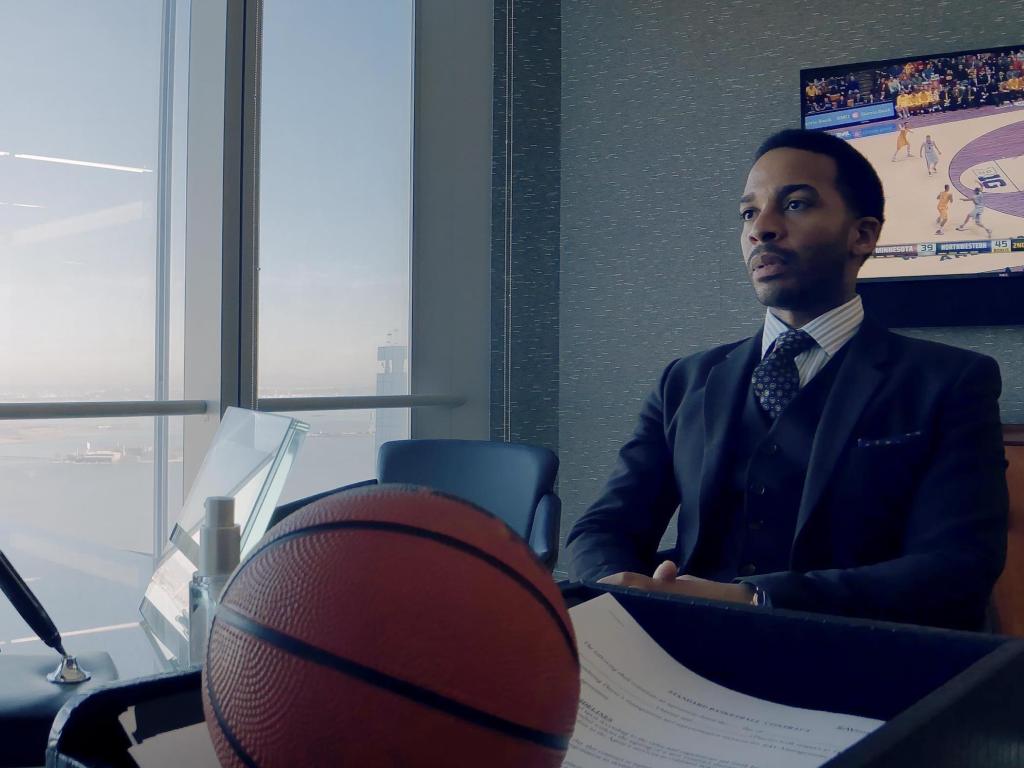 In many life situations, I recall a particular, sardonic lyric penned by Bob Dylan for his 2001 song “Po’ Boy”: “The game is the same, it’s just on a different level”. In his smart script for Steven Soderbergh’s High Flying Bird, Tarell Alvin McCraney (who contributed the story for Barry Jenkins’ Moonlight) invents a new version of this nugget of wisdom: there’s the sports game, played on its chosen arena, but there’s also what the veteran Spence (Bill Duke) calls “a game on top of a game”. This is the political game – the game of wheeling and dealing, managing and negotiating, bluffing and “faking out”.

The central celebrity in this story, young Erick (Melvin Gregg), just wants to get on a court and do what he does best: play basketball. But, since there’s a lockout being enforced by the National Basketball Association (NBA), no professional player can make any move of that kind. It’s the behind-the-scenes players who come swiftly to the fore during this impasse: agents, lawyers, NBA officials. The film’s narrative is poised at the brink of a long weekend, where the problem facing the characters is not only one of time, but also of money – quite literally in the form of immediate cash flow for Erick’s agent, Ray (André Holland from Soderbergh’s series The Knick), who finds that even his credit card has been cancelled by an anxious boss, Starr (Zachary Quinto).

The game of politics is a power game – a familiar theme from much of Soderbergh’s film and TV work. The maintenance of a “system” – whether in sport, crime or medicine – is always a precarious balancing act. High Flying Bird shows us many people operating within a complex, interconnected network and, no matter how major or minor their apparent positions in the hierarchy, as Ray observes: “The smallest shift in the system, everything gets fucked up”.

That is a recipe for constant crisis, but not necessarily for apocalyptic catastrophe – indeed, one of the pleasures of Soderbergh’s film is in the decisive “room to move” it gives to figures (especially women) who would normally count for little in American sports movies, such as Sam (Zazie Beetz), Ray’s former assistant, and Emera (Jeryl Prescott), mother and manager to Erick’s rival, Jamero (Justin Hurtt-Dunkley).

I will not pretend that, as someone with scant knowledge of American basketball and its complicated off-the-court organisation, I understood every gesture, allusion and switcheroo that goes down in High Flying Bird. But the drama still works, even for the relatively uninitiated. Much is familiar, beyond its immediate context: the world portrayed here is one in which social media – and even Netflix itself! – find a place in the shifting power game. Soderbergh loves to keep yanking us from penthouse to pavement and back again: even the sticky scene in a sauna between Ray and team owner David (Kyle MacLachlan) becomes a tense arena for business manoeuvring.

This is also a milieu defined wholly by what people like to nowadays call “intersectionality”: factors of race (much is made of NBA’s integration of black players), gender, sexual orientation, the place where one lives (business-district New York is contrasted with suburban Philadelphia), even the type of dwelling one owns or rents – all these details intermesh to provisionally fix each character in their place on the far-from-level playing field. That is, until they grab (or miss) their opportunity to make a move.

Much has been made of the fact that Soderbergh shot High Flying Bird on an iphone 8 smartphone. Many spectators (myself included) would have a hard time spotting that if they didn’t know it beforehand. Soderbergh’s previous iphone feature, the scrappy paranoia-thriller Unsane (2018), went for a deliberately rough-and-ready, B-movie look; High Flying Bird has a much slicker sheen.

But the impressive variety of camera angles and crisp editing in most scenes cannot entirely hide the fact that, in essence, this is a very talky movie. The project is almost, at this level, a nostalgic homage to the late 1980s ascent of American “indie” production in its Miramax phase. Like the films of Quentin Tarantino, Kevin Smith and Whit Stillman – plus, of course, Soderbergh’s own debut, Sex, Lies, and Videotape (1989) – most of High Flying Bird is comprised of extended dialogue scenes, usually some kind of confrontation, psych-out or subtle manipulation.

As the characters sit, stand or sprawl (sometimes in very ungainly pictorial configurations) across the wide screen and gab away from one showdown to the next, a certain monotony sets in. Soderbergh tries to break this sameness by inserting black-and-white interview footage of real-life players including Reggie Jackson and Donovan Mitchell, dispensing life-lessons whilst being framed against a bare wall. But that’s just more talk!

Commentators often try to distinguish between Soderbergh’s big, commercial movies and his small, personal projects, but that’s not where the fault-line of his career really sits. The significant division is between the films that are stuffed with physical action (like Haywire, 2011), and those that are all spoken words (like Full Frontal, 2002). I know which half of his filmography I prefer.