Once Upon a Time in Anatolia

This compelling Turkish drama, out now on DVD, uses the structure of a murder mystery to explore deeper questions about humanity and the futility of existence.
Mileta Rien
[This is archived content and may not display in the originally intended format.] 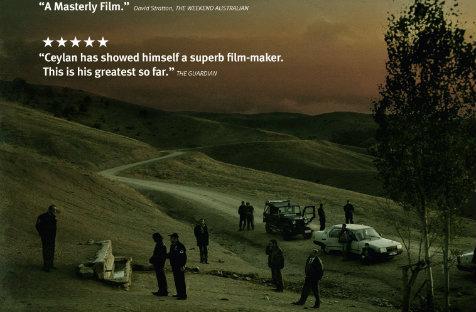 This revealing quote from director Nuri Bilge Ceylan is printed inside the DVD cover of Once Upon a Time in Anatolia: ‘The films that bored me the most in the past became my favourite movies later on. So I don’t care about boring the audience. Sometimes, I really want to bore them because out of boredom might come a miracle, maybe days later, maybe years, when they see the film again.’

True to his word, Ceyan’s sixth film is not an easy ride. A meditation on mortality and the futility of existence, it takes its time and demands your full attention.

The story takes place over one night and day of a murder investigation in rural Turkey. One of the two suspects has promised the police he will take them to the place where he buried the body, but because he was drunk when he committed the murder he can no longer remember the location. We follow the convoy of cars containing suspects, prosecutor, doctor, sergeant, gendarmes and gravediggers as they proceed from one gloomy, windswept location to the next. As the seemingly endless night drags on, the audience is made to feel the mens’ mounting boredom and exhaustion. Bantering and bickering, they jostle for recognition and control, acutely aware of their place in the pecking order. A strain of darkly absurd humour runs through the film, derived mainly from the bungling incompetence of the police and the bureaucratic idiocies they labour under.

Female characters have limited screen-time, but their presence informs the film: the dead man’s widow; the police chief Naci’s (Yilmaz Erdogan) querulous wife (heard in a mobile phone conversation); and a village mayor’s exquisite daughter (Cansu Demirci) who lends a fleeting, transformative vision of grace to this bleak environment. Another influential female character only exists within a story told by prosecutor Nusret (Taner Birsel) to Doctor Cemal (Muhammet Uzuner), of a beautiful young woman who foretold her own death. As the two men return to their interrupted conversation throughout the night, this story assumes increasing significance until a devastating secret is revealed.

Through these characters we get a clear picture of a whole society: the brutal peasant life of the rural poor; the younger generation’s desertion of this area and of Turkey altogether; and the country’s sense of itself in the world (‘Is this how we get into the European union?’ Nusret chides Naci, when the latter is caught brutalising the main suspect).

Performances are understated and authentic, with Uzuner especially impressive as the ironical, melancholy doctor. A lack of background music highlights the realistic atmosphere, with the only consistent soundtrack a natural symphony of barking dogs, crickets, birdsong and constant, howling wind.

The one special feature on the DVD is the film’s theatrical trailer which gives a hugely misleading impression of the film as a thriller, when actually it takes the conventions of a murder mystery and subverts them, in order to explore the deeper dilemmas of life and death that perplex all human beings. In terms of both theme and plot, Once Upon a Time in Anatolia raises more questions than it answers. It’s a challenging film, but a subtly powerful one.

Once Upon a Time in Anatolia

Available to rent or buy through Madman Entertainment

Fiction writer and freelance journalist Mileta Rien studied Professional Writing and Editing at RMIT. Her work has won prizes and been published in The Age, The Big Issue, and numerous anthologies. Mileta teaches creative writing at SPAN Community House, is writing a book of linked short stories, and blogs at http://miletarien.wordpress.com.