SYDNEY FESTIVAL: Live Live Cinema: Carnival of Souls is wonderful entertainment, and hopefully a precursor to many similar productions over the coming years.
Gareth Beal
[This is archived content and may not display in the originally intended format.] 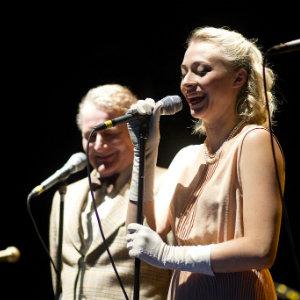 What is there to say about Carnival of Souls [1962]? The pale, ghostly figure of Mary Henry (Candace Hilligoss) staggering up the muddy banks of the Kaw River is an image burned into the public’s celluloid consciousness… Oh, wait. It isn’t. For some reason, director Herk Harvey’s only feature film is more famous for being ‘the best film you’ve never seen’.

After their car plummets from a bridge during a drag race, Mary is the only one of three girls to emerge from the murky water below. That same week, she leaves Kansas and heads west to take up a job as a church organist. It isn’t her calling. “I play for pay,” she tells her neighbour. More likely, she’s driven there by visions of a strange ghoul who haunts her waking hours, or she’s drawn to the eerie pavilion lying silent and abandoned on the Utah salt flats…

I’ll say no more. Inspired by Ambrose Bierce’s short story, An Occurrence at Owl Creek Bridge (1890), the basic plot will likely be familiar to many viewers, having likewise been adapted for any number of films since, including (but not limited to) Brazil [1985], Jacob’s Ladder [1990], Donnie Darko[2001], etc. Quite a list, isn’t it? And Carnival of Souls might well be the pick of the lot.

Filmed in three weeks on a budget of $30,000, it’s true that some of Harvey’s direction is a bit static, and John Clifford’s script can be heavy handed in places. The acting is variable. But what makes Carnival of Souls a horror classic is that, 50 years later, it’s still scary. In part this is due to its atmosphere, the starkness and stillness of the photography, together with Gene Moore’s otherworldly organ score. Partly it’s because the horror is psychological – indeed, sociological. Like George A Romero’s early films (Carnival was one of the latter’s influences when making Night of the Living Dead [1968]), it’s all about turning a mirror on the audience. It’s Bierce by way of Albert Camus. It also works as both a religious and an atheistic vision of what lies beyond. Either way, it’s chilling.

Live Live Cinema: Carnival of Souls brings the film to a whole new audience, with a new score composed and performed by Leon Radojkovic and his six-piece band. The actors’ voices are dubbed live by a quartet of very fine actors led by Chelsie Preston Crayford as Mary, with foley (sound effects) provided by Gareth Van Niekerk. All are magnificent.

The score itself certainly weaves its own atmosphere, and is terrific at punctuating the scares(!), but it can also be a bit busy at times. It’s said that the most effective horror lies in the imagination, the unlit corners of the screen, and I tend to think the same applies to music. For me, at any rate, there are moments in the film – such as when Mary explores the pavilion – that Moore’s ‘unremarkable’ organ, drifting at the edges like some faint memory, remains more appropriate and effective.

Quibbles aside, Live Live Cinema: Carnival of Souls is a wonderful evening’s entertainment (‘the best live cinema experience you’ve never seen’ if you missed this current run). Hopefully, it’s the first of a series of similar productions at the Sydney Festival over the coming years.

Also appearing at the 2012 Perth Festival
February 21, 22 and 24
www.perthfestival.com.au

Gareth Beal is a freelance writer, editor and creative writing teacher who has written for a range of online and print publications. He lives on the NSW Central Coast with his wife and two cats.