Hug the Sun Review: A Circus of Chaotic Comedy 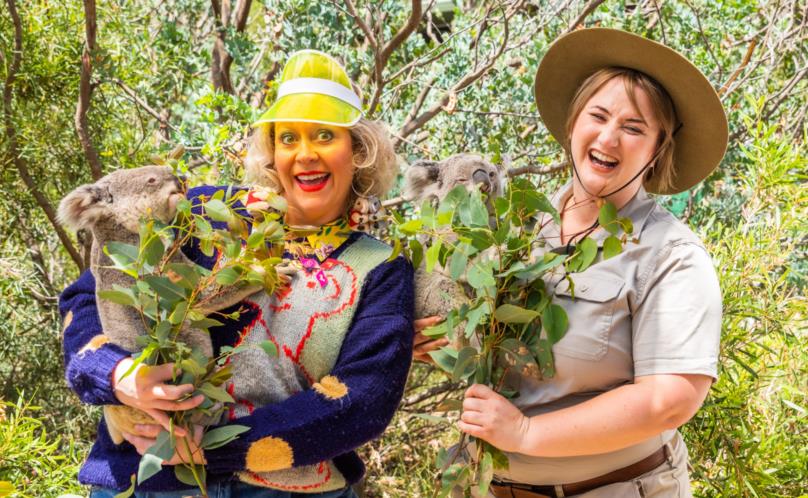 Anyone looking for their next Aussie oddball sketch comedy to follow up last year’s hilarious Aunty Donna’s Big Ol’ House of Fun will be well served by tuning into Hug the Sun, a six-part web series about a fictional cult-like group spreading their message to the children of Western Australia.

From Aunty Donna’s Melbourne-based Haven’t You Done Well production house, the six-part Hug the Sun series documents the long lost episodes of a fictional WA children’s community TV show that ended abruptly in the early 90s. Its name stems from the central concept of teaching pint-sized viewers about the sun god ‘Oxtos’, where the presenters continually solicit donations to pay bail for their leader, Gary the Prophet (Greg Larsen). With a cast wholly committed to the bonkers concept – starring comedians Andrea Gibbs, Ben Russell, Bonnie Davies and Xavier Michelides – Hug the Sun makes for routinely funny, and sometimes uncomfortable, viewing.

Each of Hug the Sun’s episodes revolves around a central theme, such as gratitude or rituals, which establishes a sense of consistency between each sketch. The series depicts a ‘live’ studio audience of children to whom the presenters direct their kooky messages of Oxtos, despite the content and language being hilariously inappropriate for younger viewers. Hug the Sun is as if Play School were in the midst of an acid trip, desperately trying to fund its criminal activities. One episode sees the children told that their parents will stop loving them if they don’t show gratitude towards Oxtos and donate to the aforementioned bail fund. This complete incongruence of preaching a supposed message of love to an impressionable group mixed with sidebars about bikie gangs, milking dogs, and a general disdain for the Australian Federal Police, is what generates plenty of hearty laughs among the absurdity.

Part of Hug the Sun’s bizarre charm is how it adopts the characteristics of early 90s television viewing to jump from one sketch to another. Episodes mainly appear in a distorted 4:3 ratio, chromatic aberration aplenty, spliced with footage of commercials (more skits) and old footy matches, as if someone had recorded over old VHS tapes on the VCR. Even the presenters – all of whom appear to be one small mishap away from collapsing into a nervous breakdown – represent the era with wonderfully garish sweaters. Each cast member brings a distinct brand of humour to the series, and a special mention must go to Russell, whose intense performance of a man who flies too close to Oxtos creates many of the series’ best laughs.

Hug the Sun does share some visible DNA with Aunty Donna’s Big Ol’ House of Fun through its interwoven narrative threads within and between episodes. With Hug the Sun’s aforementioned episode themes, the sense of continuity is a departure from the comparatively random pacing of classic Australian sketch shows Full Frontal and Skithouse, and a distinct point of difference from similarly absurd American series I Think You Should Leave. This leaves Hug the Sun with plenty of room for pointed callbacks and escalating jokes, such as Neighbour George (a recurring cameo from Aunty Donna’s Broden Kelly) lamenting at length about the violent bikie shakedowns he’s encountered, in front of a live studio audience of young kids.

Not one Hug the Sun episode breaks the 10-minute barrier, and the continuity makes each segment of the fictional show feel like micro-sketches of one nine-minute sketch. It means none of the central themes and jokes last longer than necessary, although sometimes the momentum of laughs built throughout an episode ends abruptly before reaching a punchline climax.

A high tolerance for absurdity and strange shenanigans is essential for admission into Hug the Sun’s circus of chaotic cult comedy, but this shouldn’t come as a surprise considering the talent involved at all levels of production. Although a touch brisk, Hug the Sun leaves plenty of room for laughs from the team in the future – assuming the AFP don’t get to them first.

Hug the Sun can be viewed entirely on Youtube