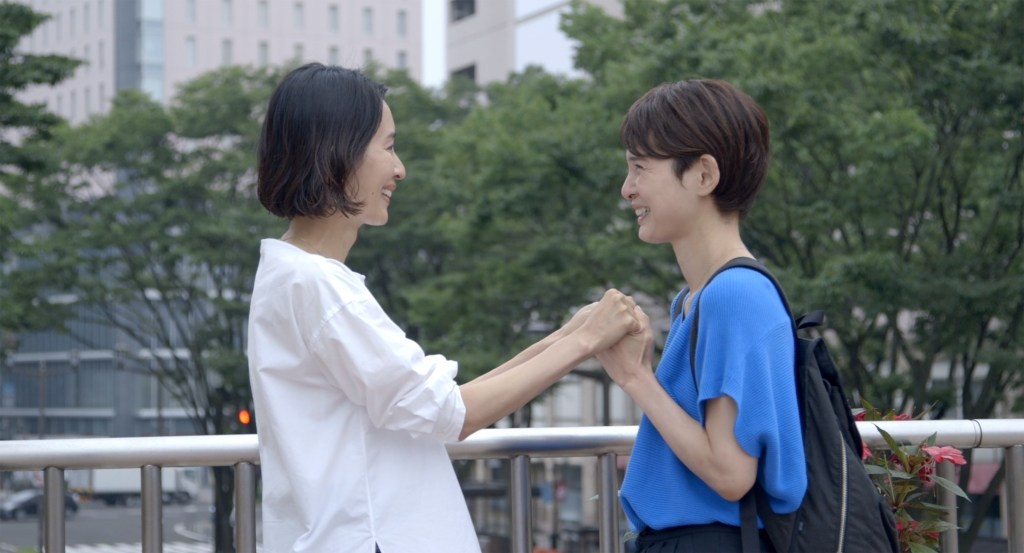 Wheel of Fortune and Fantasy, by Japanese writer and director Ryûsuke Hamaguchi, is a strange and delightful triptych exploring the power of conversation. Consisting mainly of scenes of dialogue, each individual episode is tender and surprising — even if they don’t particularly resonate as an overall piece.

The film recently won the Berlinale’s Silver Bear, and Hamaguchi’s work has been celebrated on the festival circuit. His most recent film Drive My Car, experienced much success at Cannes — that film drew from a Haruki Murakami short story and runs for three hours, and demonstrates Hamaguchi’s style also exhibited here — namely the creation of a distinctive, almost surreal mood and a pace unconcerned with brevity.

Hamaguchi adds to his collection of understated narratives buoyed by little more than characters talking. The anthology structure of Wheel offers an accessible entry-point into Hamaguchi’s oeuvre, which includes the aforementioned adaptation and also a much lauded five-hour epic Happy Hour released in 2016.

The three episodes are self-contained, each with its own title, cast and credit scene. What links them is their distinctly odd premises that lead to awkward coincidences with surprising consequences. Hamaguchi has a hankering to play with audience expectations and executes that perfectly — we’re never sure what’s coming.

In the first episode, one woman tells another about her potentially life-changing encounter — the listener asks just the right questions, and we hear the juicy gossip unfurling in the near-darkness of a taxi. Cinematographer Yukiko Iioka shoots this mostly front on, with the subjects unlit and almost impossible to see properly, encouraging a focus on the masterful flow of dialogue. Even though this scene is long, it feels real and captivating.

The opening sets up the audience to settle into a few long two-hander conversations, bereft of any overt visual bombast.  The main portion of each episode elapses this way. Hamaguchi subsequently carefully sculpts the conversations’ narrative shifts with minimal blocking, and measured shot changes that emerge from this blocking, ensuring a sense of movement (both physically and emotionally) in the scene.

That we spend so much time in few locations, with the same characters, lends a sense of immediacy, a theatre-like quality where we can fully relish the chemistry between performers, who feel intensely present with each other. Particularly good are Katsuki Mori, who is focused yet sensitive as Nao (in the second story), and Aoba Kawai, who conveys Nana (in the third story) with a kind-hearted frankness.

Not all viewers will have the appetite for long and discursive scenes of dialogue. Little action outside of conversation occurs, and the duration of (on average) forty minutes episodes is an unusual format, combined with unconventional narrative choices resulting in an unusual experience that may or may not be welcome, depending on the viewer’s appetite for the familiar.

But importantly, while their circumstances are abnormal, the characters are firmly human, and these circumstances, however convoluted, allow us to see the characters in their humour, their angst, and as they uncover gasp-worthy revelations. The subtlety of capturing these conversations leads to some piercingly felt moments —  like the recognisable feeling of being excluded from a group chat, or yielding to the familiarity of an ex-lover.

The setting remains contemporary throughout, all scenes taking place in fairly non-descript middle-class urban Japanese interiors and exteriors. The frame rarely holds visual warmth, even in characters’ homes, conveying a pervading feeling of dissatisfaction. In the murk of the discontent and bleakness, characters connecting with each other offer a palpable heat.

the characters are firmly human, and these circumstances, however convoluted, allow us to see the characters in their humour, their angst, and as they uncover gasp-worthy revelations.

There are faintly repeating ideas connecting the pieces, though not necessarily all three at the same time — the first two are charged with erotic tension between a man and a woman, and the power dynamics surrounding that tension. The first and third seem to offer comments (though diverging) on the fantasies people can construct together (can they be toxic or freeing?). The second and third are laden with regret, again with characters responding to that feeling in different ways. Through a loose tangle of affinities, sometimes be subtle, the stories all feel like they belong to the same logical and emotional world.

What all three stories share is a turn of events that lead to a sudden vulnerability, which in turns leads the making of a decision, which in turn yields an opportunity for kindness. Whether those characters decide to take that opportunity or not, there’s the joy of watching something potentially magical emerge from the mundane.

The film is also effectively sequenced— the stakes increase as we go along. The first episode primes the audience for later strangeness, while still allowing wiggle room for inventive turns ahead. Emotionally, we shift from ambiguity, to a sour middle, to a cathartic and loving end. The final episode is the most involved, with the clearest distillation of the overlapping themes of time, coincidence, fantasy and desire. An absurd strangeness still leads to a kind of release.

In the many scenes of dialogue there is a feeling of generosity and hope — that someone, in unusual circumstances, cares to keep listening, to keep responding, amidst delicate conflict and resolution, varying moods and relations, of great desires expressed quietly between unexpected participants. Through all this weight, they keep talking. It’s almost devastating when they stop.

Eric Jiang is a Chinese-Australian writer/artist living and working on Gadigal land. He has participated in artistic developmental programs by Australian Theatre for Young People, Kings Cross Theatre, Shopfront Arts Co-op, and is currently involved in Signal Boost facilitated by the Wheeler Centre. He has made contributions to FBi Radio's Culture Guide and Race Matters, and his poetry appears in Peril, Going Down Swinging, Cordite and more. You can follow him on Twitter @squeric_