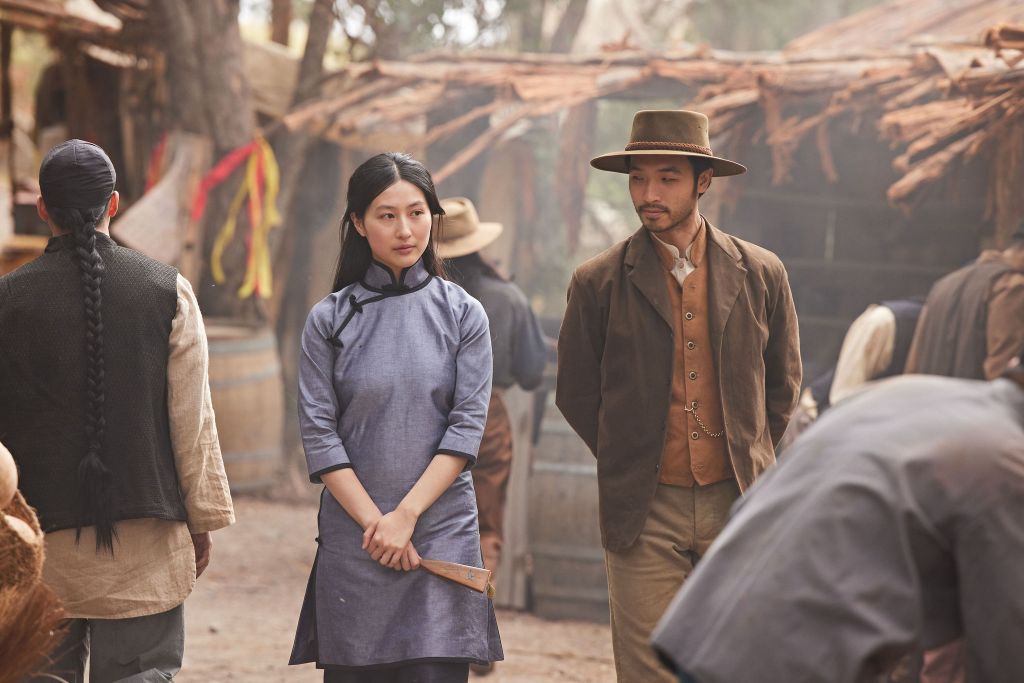 New Gold Mountain is a captivating achievement that centres on Chinese-Australian characters fighting to make their way in an unforgiving world. Though dense at times, the show has an exciting sense of place, wonderful performances, and steadily builds towards a rewarding conclusion.

Set in Ballarat in 1857, the four-part SBS miniseries follows the events of the gold rush, when Chinese miners travelled to the Victorian Goldfields in pursuit of new fortunes. What kicks off the story is a reliably intriguing murder mystery, but the show’s strengths lie in the way the many characters conspire with, interrogate, and ultimately help each other.

A few main forces drive the action. There’s the headman of a Chinese gold mining camp, Wei Shing (Yoson An), who hopes to keep a new gold seam hidden from authorities, and the freshly widowed owner of the local newspaper, Belle Roberts (Alyssa Sutherland) who both become entangled in a search for truth when the body of a white woman is found. Also here to stir things up is Cheung Lei (Mabel Li), recently travelled from China to audit Shing’s operations.

New Gold Mountain follows many other characters as they deal with the fallout. It sometimes feels like there are too many threads, though none of the subplots end unsatisfyingly. Each character has a well-sketched backstory and well-realised motivations, and it’s impressive to see the show present so many different perspectives of a single time and place. It also helps that every performance is perfectly pitched to serve the show’s overall mood.

Each character has their time to shine — it’s difficult not to be entranced by Mabel Li’s sweetly chilling Lei, swiftly finding her power in an unfamiliar place, or Alyssa Sutherland’s unwavering focus in her investigation. Leonie Wyman also does fine work, conveying Hattie (an Indigenous tracker) with a deep empathy and clarity. Leading the show is Yoson An, who gives a restrained performance, absorbing various revelations in the tale before eventually being pushed to breaking point.

The show can take on a dramatic severity, but there are some sweet comedic breaths too. One memorable moment is captured by a long held stationary shot where surveyor Yong (Keith Brockett) realises he may be in a spot of trouble, and flails into the distance. Also brilliant is Alison Bell’s continual scene-stealing as upper-class socialite Clara.

One of New Gold Mountain’s most compelling feats is its vivid atmosphere. Production designer Paddy Reardon has done a stunning job in creating a setting where the Chinese miners, at the mercy of forces beyond their control, have recreated a sense of home the best they can. Reardon evocatively creates the Chinese camp in its signage, fabric and food, while cinematographer Matthew Temple ensures that dust and toil permeate every shot. Equally effective are the interiors of the town, with wallpapered offices or dimly lit pubs creating the distinction between the two adjacent societies.

Every character is also impeccably costumed. (Veteran Australian costume designer Cappi Ireland is working here.) An wears the hell out of a wide-brimmed hat such that I fear no one else may be able to wear a hat from now on. It’s just that good. But his Western costuming immediately tells us this is a man who has decided to play on white society’s terms — contrasted with Cheung Lei, who never strays from wearing traditional Chinese dresses.

Also exciting is the inclusion of Cantonese, which is sonically delightful to hear among bush birdsong and Caitlin Yeo’s emotive score. Various accents remind us that some of these characters have travelled a long way to get here, though Chinese characters notably flit between English and Cantonese with ease — these are people who have had to learn and learn quickly to survive in this world. Early on, Shing chides his right-hand man for not speaking English, sharpening our perception of his character. That same ability is ridiculed later when he is in the company of white theatre-goers, sharpening our sense of setting by deftly highlighting the power structures at play.

New Gold Mountain mainly unfolds through its many two-person conversations. These scenes are a delicate dance with characters either determining who has more power, or finding the truth, or in search of compromise. It’s genuinely exciting to see some characters speak to each other (often characters of colour) in a way that feels precious and scarce.

These conversations continue to trickle information to the audience, which eventually contributes to a slowing down of pace mid-series. The setup, however, allows New Gold Mountain to tip into a thrilling and dangerous crescendo near its last episode, when the characters can no longer just talk about their intentions. Finally, they face the consequences of their actions, in a series of satisfying reversals, revelations, and decisions.

The presence of racism is continually and acutely felt, mostly through verbal abuse and physical violence. But Director Corrie Chen ensures that at every turn Asian-Australian characters retain agency, complexity and ambiguity. New Gold Mountain’s setting necessitates that some characters may not get the ending they deserve, but still manages to strike a sense of hope towards its end. It’s a thrill to watch what happens in the margins. Spending time absorbed in underrepresented stories like this is something like finding buried treasure.

Eric Jiang is a Chinese-Australian writer/artist living and working on Gadigal land. He has participated in artistic developmental programs by Australian Theatre for Young People, Kings Cross Theatre, Shopfront Arts Co-op, and is currently involved in Signal Boost facilitated by the Wheeler Centre. He has made contributions to FBi Radio's Culture Guide and Race Matters, and his poetry appears in Peril, Going Down Swinging, Cordite and more. You can follow him on Twitter @squeric_