Writer/director Miranda Nation swims through the choppy waters of gender with this psychological thriller.
Mel Campbell 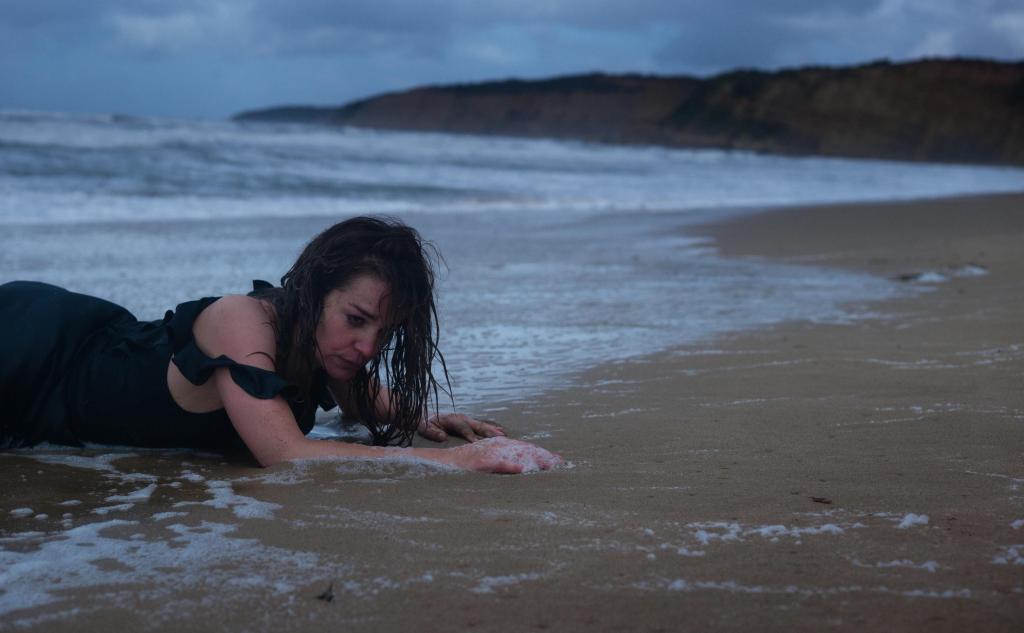 Claire (Laura Gordon) struggles to find land again in a film that has Geelong at its centre. Undertow Image supplied

Miranda Nation’s psychological thriller wholeheartedly dives into the monstrous feminine, immersing viewers in the unreliable aquatic perspective of Claire (Laura Gordon). She’s first seen in a candlelit bathroom, heavily pregnant and preparing a bath with a dreamy bliss, which swiftly turns to horror as blood seeps into the water.

Her husband Dan (Rob Collins) isn’t answering his phone, so Claire drives herself to hospital. Too late – it’s a miscarriage so severe that her doctor warns she’ll struggle to conceive again, and any pregnancy will be a major health risk.

But where was Dan? Interwoven with Claire’s miscarriage are scenes of Angie (Olivia DeJonge), a gorgeous nymphet in a skimpy, sparkly dress, travelling to a party where Dan, a former footballer who now runs a respected charity foundation, is carousing with his best mate Brett (Josh Helman) – and with other nubile women. Clearly wasted, Angie slumps on a bed, struggling to light a cigarette, only to look up as a man enters the room…

Undertow is Nation’s debut feature, filmed in and around her hometown of Geelong, and it’s both visually sophisticated and thematically ambitious. It’s a drama about the grief of unfulfilled motherhood, and the strain this puts on a marriage – but it folds this raw emotional material into a ripped-from-the-headlines story about footballers’ sexual exploitation of girls and women, and the toxic male entitlement that reigns in footy towns that treat players like local gods.

The film’s boldest creative decision – and also its weakness – is its close, suffocating focus on Claire. She’s a photojournalist who thinks visually and has a knack for noticing motifs and moments – a perspective the film echoes in its impressionistic and sometimes hallucinatory cinematography by Bonnie Elliott (These Final Hours; Spear). To Dan, and to other grieving parents in the support group they attend, Claire seems to be slowly recovering from her miscarriage. She’s back at work. But we know she’s not really okay, because she’s also grimly photographing decomposing seals washed up on the beach, and collating a truly deranged mood board in her home studio.

She shrinks from Brett, a loose cannon who’s dealing with retirement far less gracefully than Dan. Through another visual rhyme, Nation – and Elliot – suggest that Claire recognises in Brett something of the crisis she refuses to face in herself. When he crashes for the night at their house, he spits brawl-blood in Claire’s kitchen sink, but rather than washing it straight down the drain, she dips a finger in it. Blood and water, blood and water…

And it’s Claire’s eye that brings her to a motel where, randomly but fatefully, she glimpses Dan’s car, sees him leaving a room where Angie is staying, and calls him – only for Dan to lie to her about where he is. Rather than confronting her husband, she becomes obsessed with Angie – a visual fixation that only intensifies when she learns Angie is pregnant.

The film’s setting in Geelong and the Surf Coast is crucial to the story. It sets up a contrast between pristine beaches and post-industrial urban decay that echoes Nation’s chosen themes and makes sense of football’s centrality. There’s a particularly wonderful shot that gazes down a hill towards the stadium, lit up like a jewel, evoking the power and glamour that draws immature girls like Angie into the orbit of men like Dan and Brett.

For a film exploring the rippling consequences of men’s actions, Undertow almost completely sidelines its male characters. Collins is strong as Dan, the ‘good guy’ who misguidedly clings to respectability as those around him spin out; and Helman is poignant in a late sequence that reinstates Brett’s humanity. But Nation is more interested in exploring complex, fraught relationships between women.

I was glad the film avoids trashy WAG clichés. But its metaphorical imagery – water and blood, death and birth – becomes so heavy-handed that it occasionally veers into ridiculousness. Perhaps this makes sense, because the film cleaves closely to Claire’s interiority as she unravels into full-blown postpartum psychosis. But in indulging Claire, the film also uneasily objectifies Angie, whose own equally wrenching predicament never comes into full focus.

Claire begins to hallucinate Angie everywhere, in scenarios that range from beatific to uncomfortably sexual; but in using Angie as an avatar of Claire’s grief, the film doesn’t explore the grossly asymmetrical power dynamic between an experienced, wealthy, married woman and a naïve teenager with a precarious home life. Men have exploited Angie but now Claire, too, is using her, in a way that’s somehow worse for being tastefully aestheticised. And because Claire doesn’t want to admit this is what she’s doing, the film lets her get away with it.

As Claire, Gordon bears most of the film’s emotional weight in a role that demands a subtle watchfulness and closely held pain, but sometimes slops into self-satisfied stalker clichés. DeJonge is the film’s standout, adding weight to what could have been a simplistic character. Disagreeable yet somehow also vulnerable, she gives Angie the brazen vulgarity of a very young person playing at adulthood. Even as she’s stared at and photographed, fucked and fucked over, Angie meets the camera with a surprisingly flinty gaze. She’s much more than a figment of Claire’s bourgie angst.