Christian Petzold's stripped back melodrama takes not the slightest effort to recreate its World War II setting, yet it's all the more politically potent for that fact.
Adrian Martin
[This is archived content and may not display in the originally intended format.] 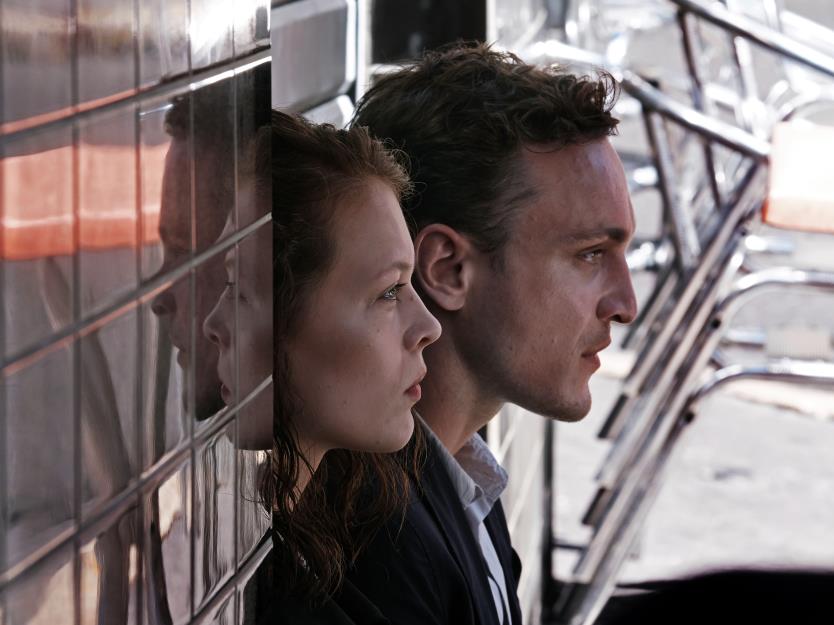 German director Christian Peztold is a fan of film melodrama. But he takes the Rainer Werner Fassbinder approach over the general Hollywood approach to the genre: that is to say, he is less drawn to redemptive sentimentality than to a keen sense of everything in our complex emotional relations that is difficult, conflicted, mistaken, delusional or out-of-phase. Transit, like many earlier Petzold works, is an agonising parade of “unsynchronised” encounters: its characters arrive to a rendezvous where the other party is already dead, or mysteriously vanished; or they project the identity of somebody who is missing onto somebody else who happens to be present; or they stare longingly out of windows at other people who are setting out on a great journey – and replacing them in their one chance to escape a hellish world.

The reasons for all this rampant, switching-around confusion are to be found in the historical context. Transit is set in France in 1940, mainly in the port city of Marseille. Georg (Franz Rogowski), a German Jew, is hiding, like his compatriots, from the Gestapo patrolling Occupied France. A strange sequence of dangerous events places Georg in Marseille, where he carries the papers of the writer Weidel – documents that include his final, unpublished manuscript. To Georg’s silent surprise, the transit authorities mistake him for Weidel (cinephiles will be reminded here of Antonioni’s The Passenger), thus allowing him the possibility of a passage to Mexico and then the United States. Even more uncannily, the woman who previously left Weidel, Marie (Paula Beer), keeps publicly mistaking Georg for her partner – and this leads, down the track, to perverse complications, especially when Richard (Godehard Giese), the doctor that Georg turns to for help in another situation, is revealed to be also involved with Marie.

The source novel of the same title was written by Anna Seghers in 1942; she, too, waited for transit papers in Marseille, and was there when her friend, the famous cultural critic Walter Benjamin, also seeking transit but overcome by the mounting demands and pressures, fled and eventually killed himself on the French-Spanish border. Petzold, who wrote the screenplay for Transit, has done an extraordinary job of paring down Seghers’ book to its most basic, essential elements. Take the role of the narrator, who is the barman at the pizza place where many scenes occur – and thus the recipient, over time, of every visitor’s unfortunate or tragic tale. Seghers, speaking through this character, provides a lengthy exposition of the time and place, before the main characters even appear.

Petzold inflects this in an entirely different direction. When the narrator’s voice is first heard, without any set-up, we have no idea who he is within the world of the fiction; and we do not get a good, direct look at him until right near the end. His disembodied words, as featured throughout, play a teasing game with our faculties of comprehension, guessing and imagining – it is a narrating voice sometimes omniscient, and at other times as unknowing or speculative as anybody else on view. As often in Petzold’s cinema, the literal life-and-death question – who exists, who is a phantom? – haunts the edges of Transit. Yet, right alongside such lofty issues, there is equal attention paid to the modest achievements of daily life – as when Georg cements his friendship with a little boy, Driss (Lilien Batman), by patiently fixing his radio.

Petzold is a strikingly to-the-point director. His style is lean and minimalistic; no shots are wasted, and no scene is unnecessarily padded. He has a strong sense of framing and the dynamic use of screen space: apparently simple images are frequently given tension by the presence of what is nearby, just off-screen, or fleetingly viewable through a window or doorway. The direction of his superb actors fits this mode exactly: they remain contained, nervy, rarely demonstrative. Petzold’s inspiration on the formal, filmmaking plane is twofold: he appreciates the most severe methods of European and Asian art cinema (such as the films of Robert Bresson), but equally the no-nonsense American “B” movies of the 1940s and ‘50s, especially those involving urban crime, like Murder By Contract (1958).

This is a taste in cinema that Petzold shared with his teacher and former script collaborator, the gallery artist and filmmaker Harun Farocki (1944-2014). It is to him that Transit is dedicated – he was the first to bring Seghers’ novel to Petzold’s attention, at a time when, as a committedly Communist author living in East Germany, Seghers was generally derided in West Germany. In fact, Petzold told interviewer Jordan Cronk in Film Comment [https://www.filmcomment.com/blog/berlin-interview-christian-petzold/] that he and Farocki read the novel together “approximately once a year” and that “all of the screenplays that we developed together were more or less based” on it.

It only takes a few minutes of watching Transit for its most remarkable aspect to become evident, and even (as Petzold surely wishes) intrusive. The film takes not the slightest effort to recreate the period setting of the 1940s, beyond keeping the costumes simple and relatively timeless, and banishing most modern gadgets (like computers) from the centre of the frame. In the many street shots, however, ads for mobile phones, for example, adorn entirely modern shops; and an LED screen beams images on the wall of the Mexican Embassy. This kind of stripped-back artifice is common in theatre but, in cinema, is far less common, because it is considered unworkably unrealistic. Not since Pier Paolo Pasolini in the 1960s has a filmmaker so brazenly staged a story against such a patently “wrong” backdrop.

This is not mere affectation, or cleverness on a relatively low budget. Petzold is appealing to our sense that the plight of immigrants and refugees is hardly any different today than 80 years ago.  Perhaps, in some countries, it still involves the same offices in the same stolid buildings – just a different generation of bureaucrats. And, without a doubt, the same procedures are in place: the waiting, the complications, the endless multiplication of documents, and the crushing rejections based on the slightest official whim or pretext.

Politically, Petzold seems to be suggesting, it doesn’t make a heck of a lot of difference whether the governments that rule over such a system are of the left or the right. Of course, the historical elements of the World War II situation are firmly part of Transit’s story: there are constant reminders of the horror of the concentration camps and the grotesque “cleansing” of Jews from the population. Yet, while Petzold underlines the clear affinity between the Nazism of that time and the various neo-Nazi movements of today, he is also careful to avoid channelling our righteous feelings as spectators against some stereotypically visible caricature of “Nazi villainy”. The evil in this story is decidedly banal and everyday – a matter of the callousness and corruption of systems, not races, nations or individual monsters.

Indeed, Petzold thinks of his last three films ­– Transit, Phoenix (2014) and Barbara (2012) – as a trilogy he privately calls “Love in Times of Oppressive Systems”. His next trilogy, he assures us, will be about fairy tales and myths. But will it be any happier or more reassuring? I doubt it.

Note: This film is screening at the Australian Centre for the Moving Image in Melbourne as part of special season ‘Transit and the Films of Christian Petzold’ from April 11 – 28. Transit is also screening at the Golden Age Cinema in Sydney, and the Elizabeth Picture Theatre in Brisbane.