Joanna Hogg asks us to float and drift through her films ... not least in this sequel to 2019's Souvenir.
Adrian Martin 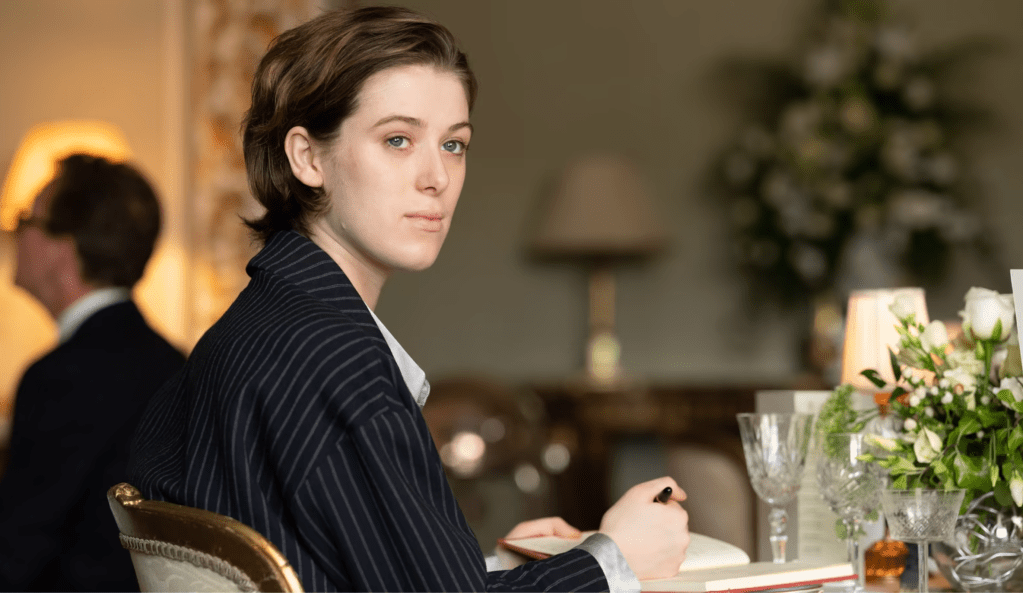 It has been a staple ingredient of art cinema since at least the 1960s: the film-within-a-film.

Perhaps the fictional characters are in the process of making it, as in Olivier Assayas’ Irma Vep (1996, currently being refashioned as a TV series) or Abel Ferrara’s Dangerous Game (1993); perhaps they simply go to the cinema and view it, as in Jean-Luc Godard’s Masculin féminin (1966). Sometimes this embedded movie appears without warning, outside quotation marks (as it were), thereby surpråising or disorienting us – the sudden burst of a ridiculous action film starring Bruce Willis in Robert Altman’s The Player (1992) offering an indelible example of this game.

I confess that I often find the film-within-a-film trick thinly conceived, poorly executed and dramatically (or comically) unconvincing. Filmmakers frequently approach these segments in an off-hand, overly ironic fashion – as if keen to convince us that they know what supposedly  ‘bad’ cinema is, compared to their own, lofty efforts (another by Assayas, Clouds of Sils Maria [2014], suffers from this superiority syndrome).

Or else the attempt to fit one film inside another leads to the most baroque convolutions imaginable, as in Rainer Werner Fassbinder’s Beware of a Holy Whore (1971), where it is almost impossible to decipher the content of the project supposedly being shot (which is, in truth, a deformed version of a previous Fassbinder work, Whity).

A more recent trend has tried to reinvigorate these mirror-chambers of reflexivity. The film-within-a-film does not merely unspool on a screen somewhere; it triggers the subjective memories of characters, or even tips over into a hallucinatory dream sequence.

On TV, the last two episodes of Euphoria’s second season cleverly launched a wave of multiple memories from the embedded performance of a school play (which is the autobiography of one of its teenage characters). And the projected film that instantly becomes an inner fantasy is what Joanna Hogg’s The Souvenir Part II ineluctably builds toward. Then again, this device is itself not entirely new: Federico Fellini was already there in his classic 8½ (1963).

But where Fellini probed and satirised the tortured mindset of a male alter ego (played by Marcello Mastroianni) swimming in his entitlement and decadent privilege as a Great Artist, Hogg offers a feminist riposte that begins in a more modest key, at film school. The path of Julie (Honor Swinton Byrne) is loosely based on Hogg’s own experience during the mid 1980s. She has declared that, from the initial moment of imagining the Souvenir project soon after the real thing ended, she formulated it as existing in two, distinct parts.

The difference between the parts is easily described: where the first part deals with the difficult relationship between Julie and her shadowy boyfriend Anthony (Tom Burke) – who managed to keep his heroin habit a secret from her, until it killed him – the second part deals with the immediate aftermath of that trauma.

Yet that synopsis misses a crucial swerve in the orientation of Part II. Yes, Julie seeks, with an understandable air of desperation and obsession, to understand what compelled Anthony to behave as he did, and what occurred, moment to moment, in the last days of his existence.

But, just as pressingly, Julie, as a director-in-training, has a film to make. It will be, to some extent, a ‘monument’ to Anthony’s memory. It will also offer her liberation from the past, and a road toward the future. In this way, Hogg skilfully commandeers the traditional ‘portrait of the artist as a young man’ genre (in both literature and cinema) for her own ends.

In the first Souvenir, Julie grappled with the demands of ‘social realism’ as a worthy form of cinema. This desire to document the lives of ordinary, working-class people exposed a gaping contradiction, given her own, privileged, upper-class background.

Plus, as we see in the interactions with her parents (wonderfully played by Tilda Swinton – i.e., Honor’s real-life mother – and James Spencer Ashworth), Julie has never truly left that milieu, no matter how much she might slum it in the pubs and clubs of the 1980s with her fellow students. (Hogg brings this gaggle of Julie’s often bitchy co-conspirators to life in swift, deft strokes, with great performances by an ensemble cast.)

In Part II, Julie decisively pivots. She embraces the role of fantasy, fairy tale and magic in movies; she swaps Ken Loach for Ken Russell. Her new choice of aesthetic is intimately tied to shifts in British film culture during the 1980s: the triumphant rediscovery of Michael Powell and Emeric Pressburger, the explosion of postmodern pop music videos, and the ascendancy of Derek Jarman’s cross-media queer art.

All this is below the surface of The Souvenir Part II, but Julie’s dream-film in fact recreates at least two images from Hogg’s own graduation project, Caprice (1986), starring ‘Matilda’ Swinton (as she was then known): the heroine levitating into the air at the start of her journey; and busting through a giant piece of printed paper at the end of it. In Caprice, that paper was the cover of a glamorous fashion magazine; now, it is a representation of The Souvenir itself, in the form of Jean-Honoré Fragonard’s 1778 painting of that title. Hogg, we sense, strongly needed to get this ambitious project out of her system, at last.

Even more radically than in the first Souvenir, the second takes what could be called a pointillistic approach. Issues of interpersonal intrigue simply arise and disappear, often in short, abbreviated vignettes (a scene that promises a new romantic intrigue for Julie goes in a different direction altogether); there is very little cause-and-effect drive between one thing and the next.

Of greater importance to Hogg are the fragile but lingering moments of mood, such as Julie wandering, in the early hours of the day, amidst the bits and pieces of the sets built for her project – moments when everything seems unfinished, open to all possibilities. It’s that type of sensation which Hogg hopes to extend over a full feature length in The Souvenir Part II; she doesn’t always get there – the loss of a compelling central relationship, in contrast to the previous instalment, weighs heavily – but the attempt is seductive.

Periodically, the second Souvenir is filled with fetching montages of flowers. At first, I imagined that Hogg was using these punctuating sequences to mark the passage of time in the narrative, as films often, conventionally do. But it turns out to be a bit of misdirection mischief: Hogg otherwise makes it impossible to tell how long anything takes in this story, or how much time has elapsed between one event and its successor.

The production of Julie’s film school project may cover weeks or months: there’s no way to know. The lovely flowers are simply lovely flowers, a spectacle unto themselves. Why burden them with either narrative function or symbolic meaning?

In all things and on all levels, Hogg asks us to float, to drift through the images, sounds and incidents of her films. In 2019, she co-edited (with Adam Roberts) and published an invaluable ‘handbook’ devoted to the Belgian-born master filmmaker, Chantal Akerman – the culmination of a complete screening retrospective that took two years across various London venues.

The influence of Akerman is felt everywhere in The Souvenir Part II – from the often static compositions to the emphasis on scenes of nothing-much-happening, people just milling about, or stuck waiting. Akerman’s ability to transit from mundanity to ecstatic lyricism (and back again, over and over) is not an easy model for any filmmaker to emulate; Hogg captures the endearing, everyday ‘flatness’ of things, but not always the transporting rhapsody. Still, she remains an important contemporary filmmaker whose work is always engaging.

Being the critic who was once publicly described as ‘approaching films with a slide rule’, I admit that I have a penchant for timing things: large-scale acts, scenes, shots, gestures, bits of business. I can’t help it; moreover, I find that measuring things in this way almost always reveals something about them.

As an afterthought to this review, I figured I should time Julie’s dream-film sequence. And guess what? It runs, unbroken, for 8½ minutes! A cryptic homage to Fellini, a tip of the hat from one filmmaker to another? Your guess is as good as mine.

Some 21 years passed between Hogg’s graduation short Caprice and this, her first theatrical feature. She spent that time working in television and music video. Unrelated is a bold statement of her cinematic style and aims: a tale of ‘age inappropriate’ desire (the woman older than the man, for a change) is performed naturalistically, but framed in a static, contemplative manner.

Australian-born Viv Albertine of the legendary punk band The Slits attended film school with Hogg, and later worked on the soundtrack of her feature Archipelago (2010). Here Albertine acts alongside a Hogg regular, Tom Hiddleston. It is an uncompromising portrait of difficult artists and their difficult, modern art.

Hogg is fascinated by the ‘eternal present’, the fleeting moment that appears to last forever as one lives it. In the first part of The Souvenir, it is love that provides this intimation of eternity. Yet love is a blindness for Julie (Honor Swinton Byrne), and a cover for the deceptive Anthony (Tom Burke). A film about the agony of disenchantment, it captures a hypnotic mood of stillness, and is a highlight of recent cinema.