Game of Thrones star Peter Dinklage offers a new take on the lovelorn hero of this enduring tragicomic romance.
Stephen A Russell 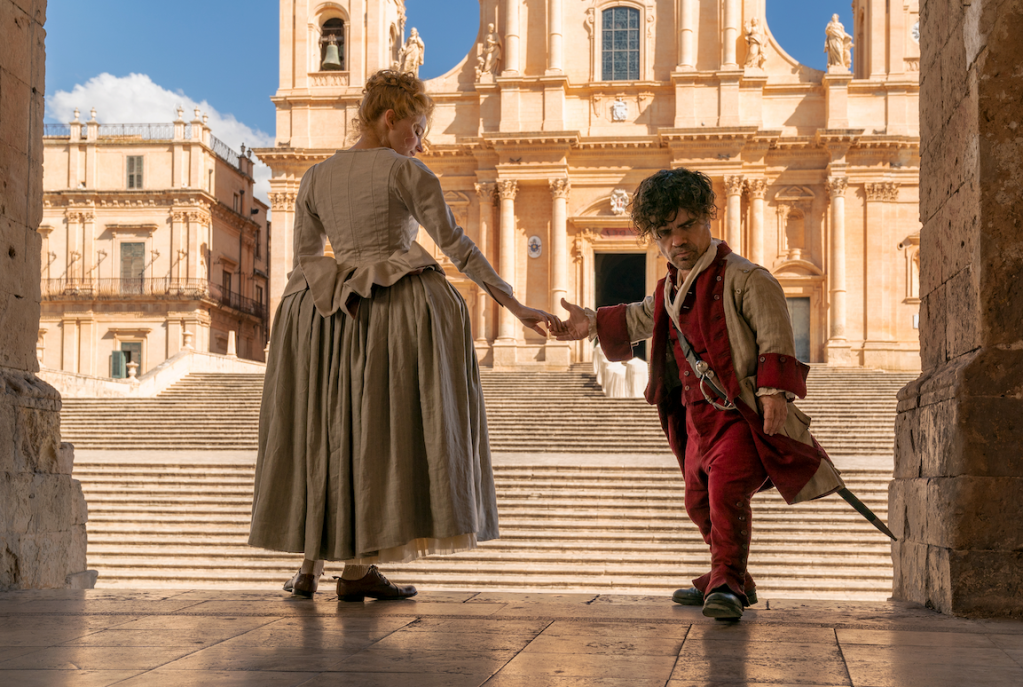 Peter Dinklage may be known to many as the wily political operator Tyrion Lannister in the bloody war of wills that is fantasy show Game of Thrones, but for some, his ability to win over hearts and minds first convinced in Tom McCarthy’s tender 2003 movie The Station Agent. He played a lonely soul who retreats to a life of expected solitude after the death of his best friend, only to make new mates with Bobby Cannavale’s unfailingly cheery hotdog stand seller and fall head over heels for Patricia Clarkson’s reclusive artist and terrible driver.

A film about the aching distances between us, often self-imposed, it’s not at all unlike Dinklage’s latest role in Darkest Hour director Joe Wright’s Cyrano. Adapted from the hit off-Broadway musical by Erica Schmidt, which also starred her husband Dinklage, it is, of course, by way of Edmond Rostand’s celebrated play Cyrano de Bergerac.

So-named for a real-life libertine of the 17th century who loosely inspires our hero, it centres on a nobleman serving in the French army who has a notable gift for poetry and the wherewithal to use it. However, he feels constrained in his longing for the beautiful and kind Lady Roxanne because of his oversized nose. And so, good sport that he is, he sets his mighty pen and nimble rhyming couplets to helping handsome new cadet Christian de Neuvillette win her hand instead, while she dodges the machinations of the menacing Count de Guiche.

One of the last great French Romantics and a sometime lover of adored actor Sarah Bernhardt, who also enjoyed a dalliance with that other great Romantic Victor Hugo, Rostand moved in circles that lived and breathed that life to the fullest. This lifeblood thrums in this latest cinematic re-telling in a long line of adaptations that have captured hearts across the centuries since it debuted a few days after Christmas at the Théâtre de la Porte Saint-Martin in Paris in 1897. First transferring to the silver screen in 1925 in a silent movie led by Pierre Magnier, both Steve Martin and Gérard Depardieu have donned a prosthetic schnoz since.

This element was entirely excised in Schmidt’s 2019 musical, with Dinklage’s dwarfism standing in for the physical attribute that convinces Cyrano he cannot win the hand of a beautiful woman on his witty words alone. A devoted fan of the show, Wright tapped Schmidt to pen the screenplay as it transfers from the stage to screen once more.

Dinklage’s simultaneously soulful and saucy depiction shines through the strength of his limpid blue eyes. He easily carries both Cyrano’s exaggerated bravado in a crowd, and his tortured doubts when yearning silently across a self-imposed gulf that holds him apart from childhood friend Roxanne. Haley Bennet, Wright’s partner, was his co-star on stage, and joins him again in this lush adaptation.

A gifted singer, Bennet easily matches Dinklage’s kilowatt charisma, as ably assisted Jacqueline Durran’s gorgeous costume work. The Trial of the Chicago 7 star Kelvin Harrison Jr likeably rounds out this romantic triangle as the hapless Christian whose words do not match up to Roxanne’s romantic yearnings.

Shot on location in some of Italy’s most wondrous corners, cinematographer Seamus McGarvey (Joe Wright’s Anna Karenina) has a field day, with the film all rose-tinted stonework set aglow in the magical half-light. A scene in which an unseen Cyrano whispers his sweet nothings to Christian loitering in the shadows while Roxanne is ablaze, framed by blinding light on a balcony, is pure cinema.

A real family affair, twin brothers Aaron and Bryce Dessner wrote the score for Schmidt’s musical, paired with lyrics by frontman Matt Berninger and wife Carin Besser. The Dessners also score Wright’s movie, accompanied by breathtaking choreography spun with élan by Sidi Larbi Cherkaoui, who also worked with Wright on Anna Karenina. The National’s particular brand of spoken-word sonorous lends heft to a story that starts out like one of Shakespeare’s great comedies of error, only to spiral into a tragedy.

It is three minor characters who shine brightest, in a heartrending scene sung by soldiers thinking of home as they await certain death at war. Shot on the snowy slopes of Mount Etna, it’s a powerful blow to anyone separated from home right now by the vagaries of the times we live in. This suits Rostand’s true story. He met an untimely end in 1918, aged only 50, during another time of plague, the Great Influenza unfairly dubbed the Spanish flu. Real life can’t help but magnify the emotions at play here, with Dinklage, Bennet and Harrison Jr great company in this beautiful tribute to a timeworn story that never grows old.

While there’s much to admire about Steven Spielberg’s masterful remake, including its commitment to appropriate casting, it can’t quite step out of the shadow of Jerome Robbins and Robert Wise’s first big-screen adaptation. The choreography of the original wins out. There’s something to be said for the much more overt staginess of its sets, Robbins’ glorious choreography, and the more fantastical elements layered into the lighting design.

Speaking of movies that maintain the spirit of their stage origins, director Jim Sharman had an absolute ball with Richard O’Brien’s bonkers tribute to classic B-movies. What’s not to love about the deliriously salacious corruption of Barry Bostwick and Susan Sarandon’s uptight Brad and Janet, who choose the wrong but oh so right house to shelter in when their car breaks down one dark and stormy night? But it’s Tim Curry’s chaotic good Dr Frank-N-Furter that steals the show, especially when hacking up the late, great Meatloaf.

As with Cyrano, an element of bawdiness spices up historical tragedy in the legendary Bob Fosse’s masterpiece. It started life as queer author Christopher Isherwood’s semi-autobiographical novella Goodbye to Berlin, depicting the last days of gay abandon before the Weimar Republic fell to the insidious rise of the Nazis.

This was adapted into John Van Druten’s 1951 play I am a Camera, and then the musical by John Kander, Fred Ebb, and Joe Masteroff. But it’s Liza Minnelli’s depiction of Kit Kat Klub singer Sally Bowles that’s seared into eternity.