This gangster tale could have been a feminist favourite, but its stellar cast are let down by one-note character writing.
Anthony Morris
[This is archived content and may not display in the originally intended format.] 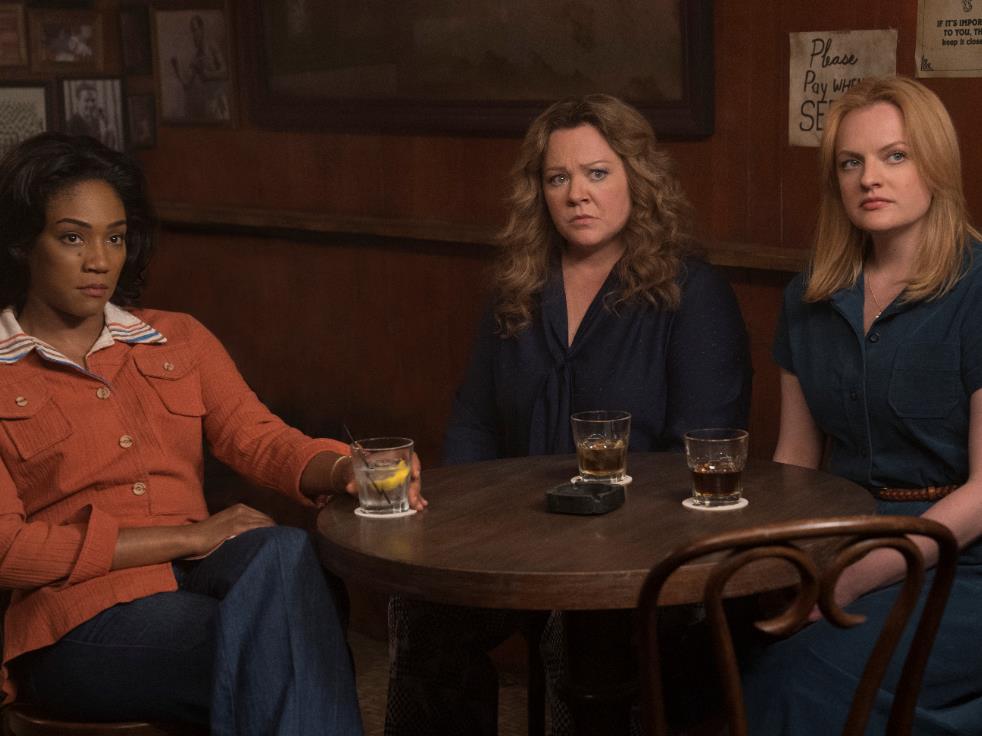 The year is 1978, and in the New York neighbourhood of Hell’s Kitchen, three members of the dwindling Irish mob are about to pull a liquor store robbery. They need some extra cash; the protection racket isn’t paying off like it used to. But when they’re nabbed by the cops and sent away for three year stretches, their wives – Kathy Brennan (Melissa McCarthy), whose husband is the decent one, Ruby O’Carroll (Tiffany Haddish), whose husband is the arrogant one, and Claire Walsh (Elizabeth Moss), whose husband is the violently abusive one – are left to fend for themselves.

Simply by virtue of not being as dumb as a box of rocks, they quickly take over the protection racket – by actually offering protection, not just sitting around in a pub getting drunk. There’s the occasional moment where it looks like they might be in over their heads, but once Vietnam vet Gabriel (Domhnall Gleeson) turns up to help out even the violence side of things is sorted. Claire learns self-respect by learning how to kill, Ruby sees the opportunities for expansion (especially once her gleefully awful mother-in-law, played by Margo Martindale, is sidelined) and Kathy starts doing good for the local working men by using her new leverage to get them construction jobs. But what happens when their husbands get out?

Usually gangster movies are about the perils of crime, the rise and fall of an empire, the way a life of crime rots the soul; it’s not a genre known for its happy endings. But The Kitchen – directed by first-timer Andrea Berloff and based on a comic book mini-series by Ollie Masters and Ming Doyle – is blatantly a tale of female empowerment where these women take over and do a better job of it than the men. It’s not exactly subtle about it (there’s more than one speech about how their men have pushed them aside and kept them down) but there’s never any suggestion that this view is self-serving on their part. Organised crime here isn’t a cancer on society, it’s just a well-paid job they’ve been kept out of by the patriarchy.

In a different film the tension between the demands of the gangster genre (crime doesn’t pay) and the female empowerment genre (women can do anything men can, and better) would be electric, throwing open doors to all manner of possibilities. Here it just means a lot of stock standard gangster movie scenes delivered with a modicum of competence; at least the late 70s New York setting is recreated with flair (check out all the trash on the streets!).

While the central characters struggle to develop a second dimension (forget about the supporting cast, they’re one-note at best), the trio of leads work hard to make them into fully rounded human beings. Moss is stuck with the most basic of character arcs – an abuse victim who learns to fight back – yet manages to fill her early scenes with queasy self-loathing and her later moments with a feral danger that feels genuinely threatening even as her character’s end point becomes obvious.

Haddish has a more interesting role, even if her character is painted in broad strokes, but she makes the most of the moments when the tension between who she was and who she’s been forced to become are clear. And McCarthy, who consistently delivers great work when she’s not acting in C-list comedies written or directed by her husband, shows both the steel within Kathy and how that steel frightens her.

Gangster movies, and any other genre that involves characters being tempted towards easy money, often feature a parent or mentor figure who symbolises the ‘right’ way of life – a father or uncle who shakes their head sadly when the lead comes in wearing flashy new clothes. In The Kitchen that’s Kathy’s father, a rare Irishman with a non-crime background (“’hat’s your mother’s side of the family’ he points out helpfully).

For most of the film he’s left to shake his head sadly at the dinner table as Kathy and her crew tighten their hold on the neighbourhood – until suddenly, right after the scene that in literally any other gangster movie would be the point where we realise she’s become an amoral crime monster, he sits her down in church and tells her he totally approves of what she’s now doing.

‘You did it for your kids, and I can respect that.’

He shrugs. ‘Eh, you still did the right thing.’

Tell that to all the people they killed.