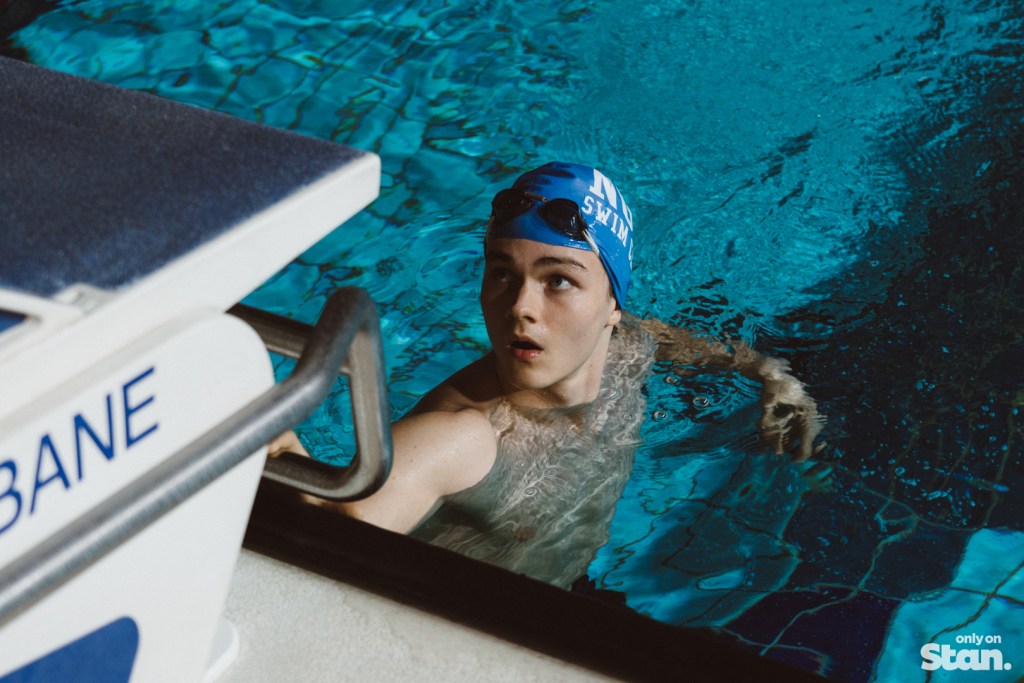 Levi Miller shines as the athlete too young for the pressure in Streamline. Courtesy Stan.

At this year’s Olympics in Tokyo, the athletes didn’t just look like they were getting younger. The addition of the youth-skewing skateboarding and BMX freestyle, as well as the increasing demands of many sporting disciplines, meant that children as young as 11 and 12 were competing on the world’s largest sporting stage. We would still call them kids if they were in school or on the bus causing a ruckus. And yet they carry with them the hopes and the physical demands of a society in which winning at sport is the pinnacle of life’s potential.

The athletes trained and played and fought for a win. Viewers may cheer and scream at the television, but eventually they will change the channel forget about those young boys and girls who put their childhoods on hold for the entertainment of viewers and the (one hopes) self-satisfaction of being a sporting champion.

In first-time feature filmmaker Tyson Wade Johnston’s well-timed Streamline, the personal toll of being ‘the next big thing’ weighs heavily on the shoulders of an ordinary-looking 15-year-old high school student. This film, streaming on Stan, is a sporting coming-of-age drama starring Levi Miller as Benjamin ‘Boy’ Lane, a swimming prodigy who has the eyes of an elite institution recruiter (Steve Bastoni) bearing down on him. It’s all 3am wake-up calls with mum (Laura Gordon) and laps with Coach Clark (Robert Morgan), before school classes with girlfriend Patti (Tasia Zalar) and well-meaning teacher (Isaac Drandic).

Like other Australian productions about the pursuit of aquatic greatness — Russell Mulcahy’s Swimming Upstream and Robert Connolly’s Barracuda — Benjamin has to push through personal turmoil before he can become the star that everybody thinks he can be. His father (Liverpool blow-in Jason Isaacs) is recently released from prison, throwing preparations into the dust and sending him on a collision course with his cane-cutter brothers Dave (Jake Ryan) and Nick (Sam Parsonson). They’re not quite The Boys, but they’re clearly bad news, with Dave—built like a stack of bricks—doing his best to turn the impressionable younger sibling into a boozing, smoking deadbeat.

It’s familiar territory, but at least Johnston tells it with confidence. What his screenplay lacks in surprises, it impresses with surprising restraint. He is helped immeasurably by cinematographer Michael Latham, who has previously specialised in documentary (Ukraine is Not a Brothel, Island of the Hungry Ghosts) and the cold calm of The Assistant and Strange Colours. Here Latham doesn’t just rely on underwater shots as you might expect (although they are good, too). Rather, he finds interesting ways to hold the actors in frame while making vivid use of Queensland’s ink-black skies punctuated only by the buzzing fluorescent of a restaurant sign or a suburban streetlight.

As Benjamin, Levi Miller shows that he has matured as an actor since Red Dog: True Blue, Jasper Jones and his American breakthrough in Ava DuVernay’s A Wrinkle in Time. The 18-year-old proves to be a great fit for Benjamin. He’s not just a talented actor, but it comes as a welcome relief that some 26-year-old hunk of a man wasn’t cast in the lead, as would probably have been the case in a similarly-themed American film. Streamline makes great use of Miller’s youthful looks, never letting us forget that these expectations of world-conquering greatness are being placed on a boy who doesn’t have the emotional maturity to process it.

Unfortunately, like an athlete exhausting themselves at the final sprint, Streamline comes unstuck in its finale scenes. Johnston’s directorial choices during the climactic race sequence struck me as miscalculated and deflating, with a finale that comes across as rushed or even incomplete. It is all well and good to want to subvert an audience’s expectations (if that is indeed what Johnston was doing), but given the success of the film’s dramatic narrative for the first 80 minutes, the end is especially unsatisfying.

Olympic gold medallist Ian Thorpe is on hand as executive producer (and even has a cameo in an end credits coda) and his own experience as a world-class athlete with personal turmoil on his shoulders brings a sense of gravitas to the proceedings.

Maybe my own COVID lockdown-induced indulgence in the Olympics this past July and August has made me crave the temporary high of watching a sportsman (or even an actor portraying one) become the best in the world. Maybe I craved the cathartic release and excitement of a traditional Hollywood ending. Whatever the reasoning for the choices made, Streamline ends on a fizzer.

Still, Streamline is more of a success than its finale suggests. Australian champion and Olympic gold medallist Ian Thorpe is on hand as executive producer (and even has a cameo in an end credits coda) and his own experience as a world-class athlete with personal turmoil on his shoulders brings a sense of gravitas to the proceedings.

Streamline is an assured debut that I hope people will discover on the Stan streaming service. Like an athlete pipped at the post for a premiership, this is still a very strong showing and I look forward to seeing what comes next for everyone involved.